Have you noticed that RDS has a new feature? Yup! 3 days ago AWS has announced that now RDS supports setting up connectivity between RDS and EC2 only in 1 click. We don't need to prepare VPC, subnets, security groups, etc. Wow! That sounds great, right? But some "T&C"s are applied to make this feature work properly. How does it work?

In case you want more information about new features, you can visit this link.

Anyway, I did all of these following practices via Console because I still can't find the CLI option for this feature maybe because it just launched (CMIIW and tell me in the comment if you know any information about this). I'm sorry if you'll see bunch of images below :)

Minimum network prefix (CIDR) per subnet is /24 to create RDS DB instance in the same VPC as EC2 instance.

For example in this case I'll be create RDS in Jakarta region (ap-southeast-3) which it has 3 AZs.

Based on my experience in "trying" this feature 2 days ago, I found some stuffs you might need to know. Here we'll play some scenarios, so we can be more understand about this feature.

Below is the diagram when I only created 1 public subnet in 1 AZ for EC2 instance before creating RDS and 2 more AZs don't have subnet yet. From this condition, 3 idle /24 is available and enough to be used by RDS to create one subnet with /24 in each AZ.

Note: In this case I used Free Tier template which Multi-AZ is disabled because it's just for personal testing purpose. That's why the automated backup is created in the same AZ and stand-by instance is not created. You can use Dev/Test or Production to make those options enabled. 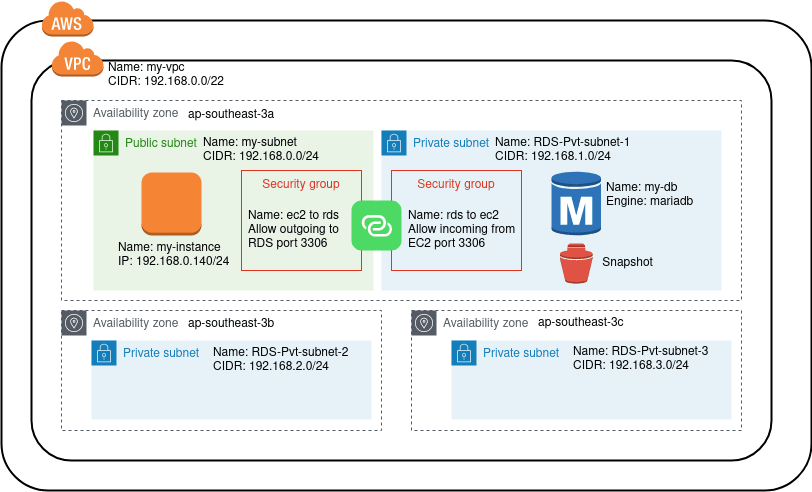 What did RDS create?

In this case, the connectivity should be successfully established because it has CIDR that big enough to create new subnet /24 in each AZ for RDS which is /16. 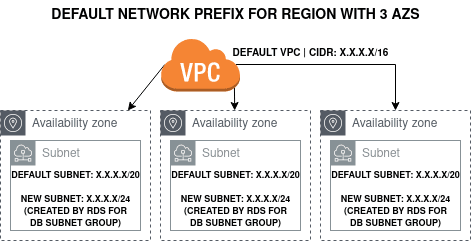 The result is failed. Why? Because /23 only can be divided into 2 /24. See the following diagram!

In this case, RDS DB instance is still created but it's using default VPC which is in different subnet from EC2.

2 new security groups are also created by RDS for the new VPC but only security group for EC2 is properly attached because RDS is using default subnet group of default VPC which is specific rule is not configured to allow incoming traffic from EC2 port 3306 to RDS.

Q: Then, how to make it work?
A: We can't do that because we can't change VPC of both RDS and EC2

If you followed my scenario number 2, it created EC2 instance and RDS in the same VPC which is default VPC and it already has 2 security groups created by RDS. So in this case, all we can do:

Alright, we've done with all the scenarios!

That's it for now! Thank you for coming and I'm looking forward to your feedback. Follow me to get notified when my new post is published!

True love is not hard to find with RedisJSON

Once unpublished, this post will become invisible to the public and only accessible to Nurul Ramadhona.