In recent times, quantum computing has been making headlines in the news (example links 1, 2, 3, 4). It has long captured the imagination of scientists. However, now it is starting to capture the attention of investors as well. In 2021, investors have already invested $1.02 billion in the quantum computing industry compared to previous three years combined. It is starting to get traction from outside the scientific community.

If you work in IT, you should take the time to learn the fundamentals. When this technology becomes mainstream, the knowledge you've gained will assist you (or your business) in leveraging the technology successfully. You will be one step ahead of your competitors.

In our daily life, we are used to interacting with systems or communicating in a binary fashion (ON/OFF, YES/NO, 0/1). A switch, for example, can be either ON or OFF. The engine of a car is either running (ON) or stopped (OFF). You are either working from home (YES) or not (NO). It is hard to envision any other state outside the binary. So is it even possible to have a system which can be in both states at the same time? The answer is yes. 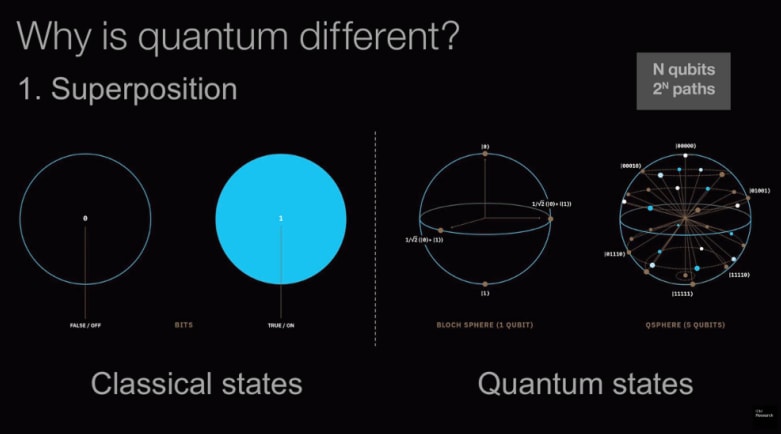 This characteristic of existing in both states at the same time is known as superposition in quantum computing. Its roots lie in quantum mechanics. To understand what gives rise to superposition, you will need to understand the idea of wave-particle duality. In classical computers, "bits" can be either 0 or 1. Quantum bits (also known as qubits) are comparable to bits in that they have two measurable states, 0 and 1. Qubits, unlike classical bits, can also exist in a superposition of these 0 and 1 states. As a result, the quantum superposition principle effectively states that a quantum particle can exist in two separate locations at once.

When a measurement operation is performed on the particle, it collapses to a single quantum state. The term "collapse" is commonly used in quantum computing/mechanics. It means that instead of being in a superposition state, the qubit adopts one of the two states (1 or 0).

To demonstrate quantum superposition, let's use a coin analogy. The coin has two sides, one with heads and one with tails. It also has a 50/50 chance of landing heads or tails. What happens when the coin is in the air after you flipped it? Is the answer heads or tails while in the air? The answer is that it is both. The coin is in a state of superposition, with both heads and tails, just like in the Flintstones gif (below). However, when it lands, it collapses to a single state, either head or tail.

That is, at a high level, what superposition is in quantum computing. If you wish to study more about superposition, there are articles/books on the internet that describe it in greater depth. This piece was not intended to go into great detail, but rather offer you with enough information to get you started.

If you believe I have made any mistake in the post, please leave a remark. This will help improve my knowledge and better explain the topic next time.

My Course on Angular Getting Started

🧵 Is Carbon really the next C++

Once unpublished, this post will become invisible to the public and only accessible to Harinder Seera 🇭🇲.