Terraform offers a robust, declarative way to describe your cloud infrastructure as code. And unlike some other IaC tools, Terraform also does a decent job comparing differences between your current version of IaC code, the last deployment stored in Terraform state, and the current state of the deployed cloud resources. But when it comes to managing and deploying multiple copies of the same infrastructure, an additional tool is needed. And that tool has the name Terragrunt.

In this article, I assume that you understand the basics of Terraform. If you’d like to check the Terraform basics first, this article is for you (article in Finnish): https://www.nordhero.com/posts/google-cloud-terraformilla/.

IaC means Infrastructure as Code. The idea is that you don’t have to manually log in to the AWS Console and set up the infrastructure by selecting services in the console and clicking the systems up. The manual approach could be acceptable if you only had one environment for testing purposes. But if you would need to set it up again, or if you had more than one environment that should have the same resources and configurations (e.g., development, testing, and production environments), you shouldn’t try to manage those manually. Instead, you probably would like to use an IaC tool like Terraform to set up the infrastructure configurations as code to be deployed quickly and repeatably.

DRY means Don’t Repeat Yourself. The downside of a declarative language like Terraform is that it’s not that easy to manage variations of the same code if you need the deploy the same infrastructure with a few different flavors depending on the use case. You quickly end up making multiple copies of the infrastructure code to manage various similar kinds of deployments. And that’s what Terragrunt is here to solve.

How to keep Terraform code DRY?

The following figure illustrates an imaginary deployments folder setup where one production account has production environments both in the us-east-1 (N. Virginia) and eu-central-1 (Frankfurt) regions and an additional demo environment in the eu-central-1 region. There’s also a staging environment on its own account utilizing the eu-central-1 region and a dev account with a similar setup. As I’m working with both feature development and performance testing, I have two environments deployed on my sandbox account. The sandbox-pekka-perftest environment has production-kind infrastructure resources configured on it — for example, having larger Fargate clusters or heavier EC2 instances with provisioned IOPS SSD volumes. As the performance testing environment has more resources, it also generates more costs. Therefore it is easy for me to tear down the stack when the test session ends and re-deploy it again when needed without affecting the standard sandbox environment residing on the same account and region. 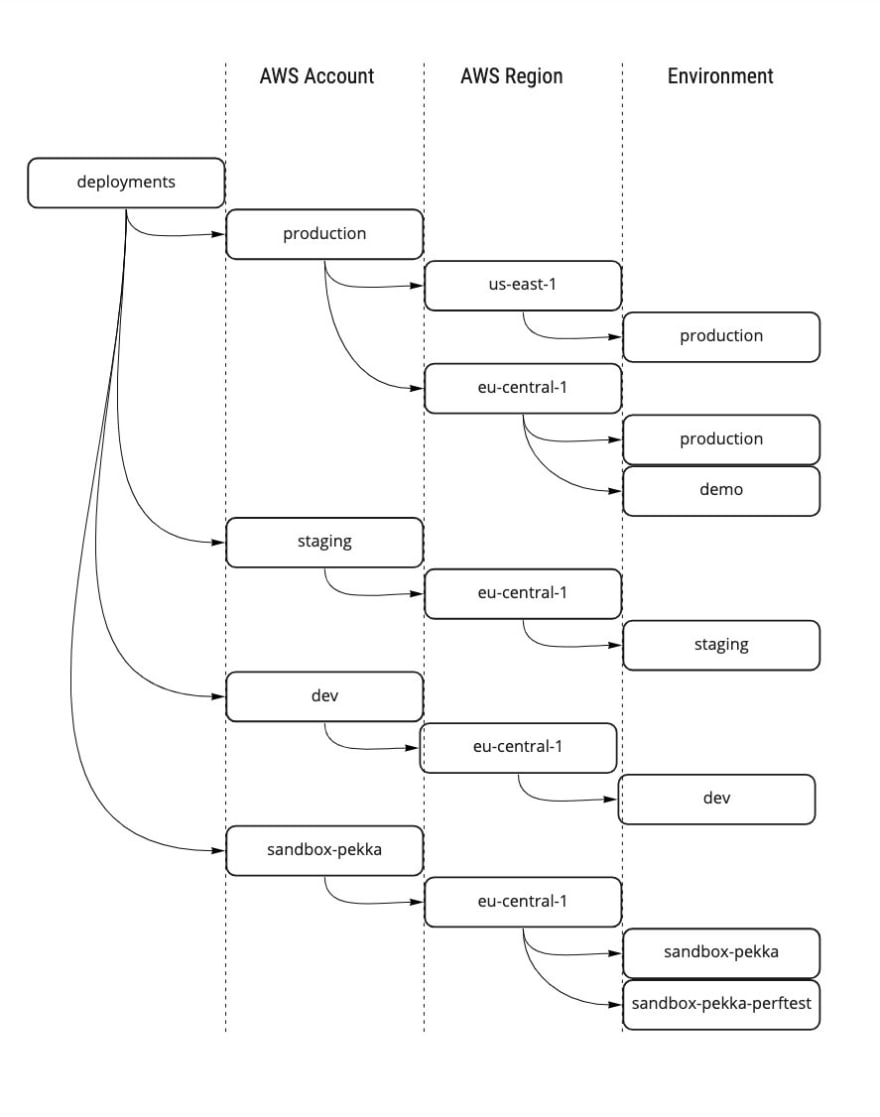 First, install Terraform on your desktop. I have macOS, and I like to use the Homebrew package manager (https://brew.sh/) for the job, so the commands below use brew. There are multiple ways to install the Terraform on different operating systems, and you can find the right ingredients from https://www.terraform.io/.

Here are the magic commands for macOS/Homebrew installation of Terraform:

If you get a Terraform version info, you have succeeded in the installation.

And next one goes for Terragrunt (more installation options at https://terragrunt.gruntwork.io/):

If you get the Terragrunt version number, you are good to go to the next phase.

The infrastructure with Terraform IaC

Let’s first create our infrastructure code. In our example I have a small stack including only one S3 Bucket with data encryption utilizing a customer-managed KMS Key. I have included only a few lines of Terraform code here to point out how Terraform works with Terragrunt. If you wish to try out with my example code, you can find the whole Terraform code example in the GitHub repository.

First, create a new folder on your computer for our project (you can name it as you wish) and create a folder infrastructure in the project root. Under the newly created folder, add all needed Terraform files. For example here is the code for the S3 bucket configurations (in file infrastructure/s3.tf):

As you see, I have used Terraform variables name and environment in the bucket’s prefix. That will let us automatically change the bucket prefix per environment. And as you might already guess, those variables are managed with Terragrunt.

In addition to utilizing variables in Terraform code, we need to define the variables from Terraform perspective. Create a file named infrastructure/vars.tf:

Next to the main course!

The deployments/terragrunt.hcl file is a key configuration file for Terragrunt. Please go ahead and create the file with the following contents:

Next, let’s create the needed files for Terragrunt variables. Please create the following .hcl files and replace the folder names and variable values with your own account/region/environment information:

The name and environment variables will be utilized in the Terraform code created in the chapter The infrastructure with Terraform IaC. And the state_bucket and dynamodb_table values will be used to create the Terragrunt state bucket and state lock table for the environment.

And one last thing to the Terragrunt configurations. Create one more folder and file: deployments/sandbox-pekka/eu-central-1/sandbox-pekka/infra/terragrunt.hcl:

This is the Terragrunt configuration file that we will execute later on. What it does is that it first takes in the common terragrunt.hcl configurations we created in the deployments folder and then configures the Terraform infrastructure folder to use with the deployment. As you see, it is possible to configure different versions of Terraform code, having different base_source to use with different environments (not that DRY approach, thou). Or, more importantly, you could split your Terraform code into multiple modules and select which modules to deploy to this particular environment. For example, if your full stack includes the OpenSearch service (formerly ElasticSearch), but you don’t need OpenSearch in your development sandbox, you could choose to deploy all other modules but not to deploy the module that contains OpenSearch configurations.

Now we are ready. You should now have the following kind of folder structure and following files in your deployments folder:

Deploying the infrastructure with Terragrunt is very similar to deploying with Terraform. You have the same commands in use. The main difference is that you need to run the Terragrunt commands from the respective deployments/your_account/your_region/your_env/infra folder you wish to deploy. So please cd to your infra folder:

Before running any Terragrunt commands, we must ensure we have successfully connected to the right AWS Account with AWS CLI. If you don’t already have the AWS CLI configured, please follow the instructions: http://docs.aws.amazon.com/cli/latest/userguide/. After configuring AWS CLI, test the connection by running the following command:

You should get a response containing your UserId, AWS Account Id, and an IAM Role ARN if successfully connected. Check once more that the Account is the one you desire to deploy infrastructure to and that you have the same information in your deployments/your_account/account.hcl file.

Next, we are ready to rock ‘n roll. Let’s first initialize the Terragrunt:

When running the init for the first time, Terragrunt recognizes that the S3 state bucket does not yet exist and asks whether Terragrunt should create the bucket for you. Please allow Terragrunt to create the state bucket. Terragrunt will automatically create also the state lock DynamoDB table at the same time. When everything is ready, you should receive a green response stating that the backend has been successfully configured to use S3 and that Terraform has been successfully initialized to use the hashicorp/aws provider plugin.

Next, let’s plan our deployment and save the plan in the tfplan file:

Terragrunt will now describe the resources it plans to create. Please check that there are six resources to be added and that no errors or warnings have been raised. If everything looks ok, we can next deploy the infrastructure plan saved in the tfplan file:

You should now get a green message stating “Apply complete!” with the number of resources created, changed and destroyed.

Congratulations! You have now successfully set up Terragrunt and deployed your first infrastructure stack.

Deploying the infrastructure to another region

Now to the desserts. The benefits of Terragrunt start accumulating when setting up the next copy of the infrastructure. Let’s assume we would like to set up the same infrastructure for the same account but in a different region. The greatness is that we don’t need to touch the infrastructure/*.tf files at all.

What we need to do is:

Now try it yourself!

That was a nice ride! We needed to create a bunch of configuration files. Still, in a typical development project where you have multiple sandbox environments and a deployment pipeline with development, staging, production, and demo environments, it starts to pay off quickly. And in real life, you would probably like to automate the deployment pipeline from your source code repository so that, depending on the repository branch, you would automatically select the deployment folder to use with Terragrunt deployment.

NordHero is there to help you set up the infrastructure, manage the multi-environment platforms and automate the deployments with your selected GitOPS platform. Give us a call/email/LinkedIn message if you would like to hear more!

P.S. You can download the whole demo project in the Github repository.

Redirects and rewrites with Edge computing

AWS Community Builders on a Holiday

Once unpublished, this post will become invisible to the public and only accessible to pmalmirae.