As I awake one morning from uneasy dreams, I found myself asking why I never tried to use Apache Kafka.

As a event-driven enthusiast and with the recent announcements of Amazon Managed Streaming for Apache Kafka (MSK) Serverless and the Serverless Kafka offering of Upstash I gave another try.

I played a little on my computer in the past, but only see the work to go to production. I confess was beyond what I was up to do in my free time. So the serverless come to rescue! This is one of best-selling point of “not having to think about servers”, you can just experiment with new technologies.

Since the AWS offering is in public preview and not General Available, I went with Upstash's Kafka Serverless offering.

I thought that since Kafka was a system optimized for writing, using a writer’s name would make sense. I had taken a lot of lit classes in college and liked Franz Kafka. Plus, the name sounded cool for an open source project.
So basically there is not much of a relationship.
Jay Kreps, Apache Kafka’s co-creator on Quora

Kafka is a publish/subscribe messaging system. Other ways to describe it are “distributed commit log” or nowadays, as a “distributing streaming platform”.

The core entity for Kafka is a message. For all purposes, Kafka doesn't care about the content of the message. It's just an array of bytes. Messages also can optionally have a key. Kafka persistently stores the messages in the order. Is possible replay the stream to get to the state of a system at a point in time. A time machine for your transactions. 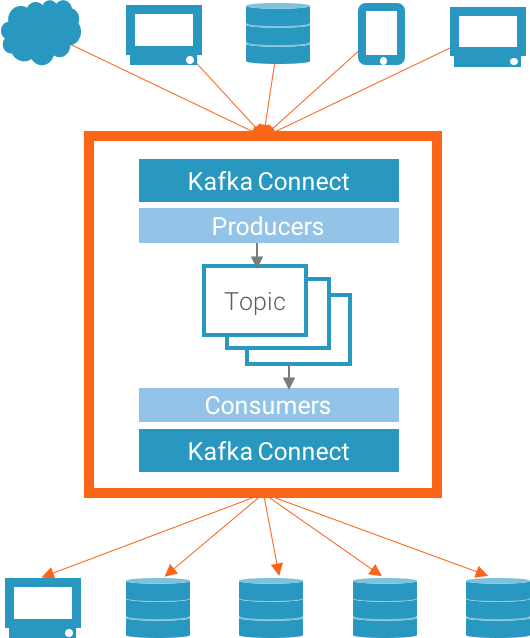 Topics are a way to categorize the messages in order to allow other applications to have some visibility of what messages they will access.

And then, the heart of the system: Producers and Consumers. Basically, the first, also called publishers or writers, produces messages, usually a lot of messages, to require Kafka, and other applications act upon those messages. Consumers read messages from a topic and. We can call them subscribers or readers too.

Kafka is a lengthy subject, worth of books, courses and hand-on practice. There are a lot more concepts that I will not cover in this post. Well is even subject for papers, like On Efficiently Partitioning a Topic in Apache Kafka. I highly recommend Apache Kafka for beginners - What is Apache Kafka?.

The benefits of a serverless offering is the overhead in management of brokers, partitions, the Zookepeer and all the other moving parts to allow a fault-tolerant and highly distributed applications is taken care for you. And then, you can focus on write the code you need in your domain, with your tools — this is what I call the joy of serverless.

To start, you just need to login, select Kafka and will create our first cluster. Kafka works in a distributed way from the get go. 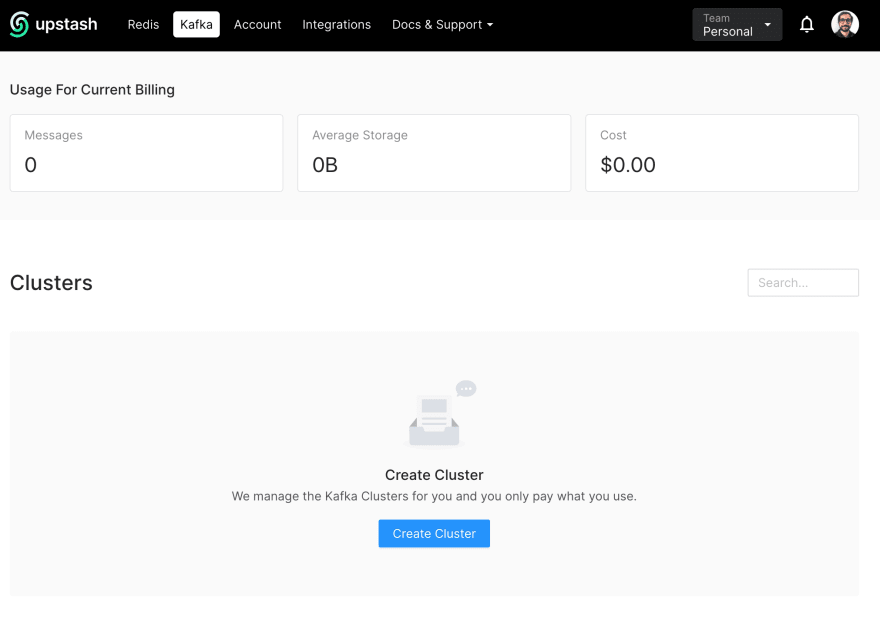 To create the cluster, we'll need a name and select the region. And also, if we need to be in only one availability zone or span of over one. Choose a single-zone for testing/development, multi-zone for production use cases. 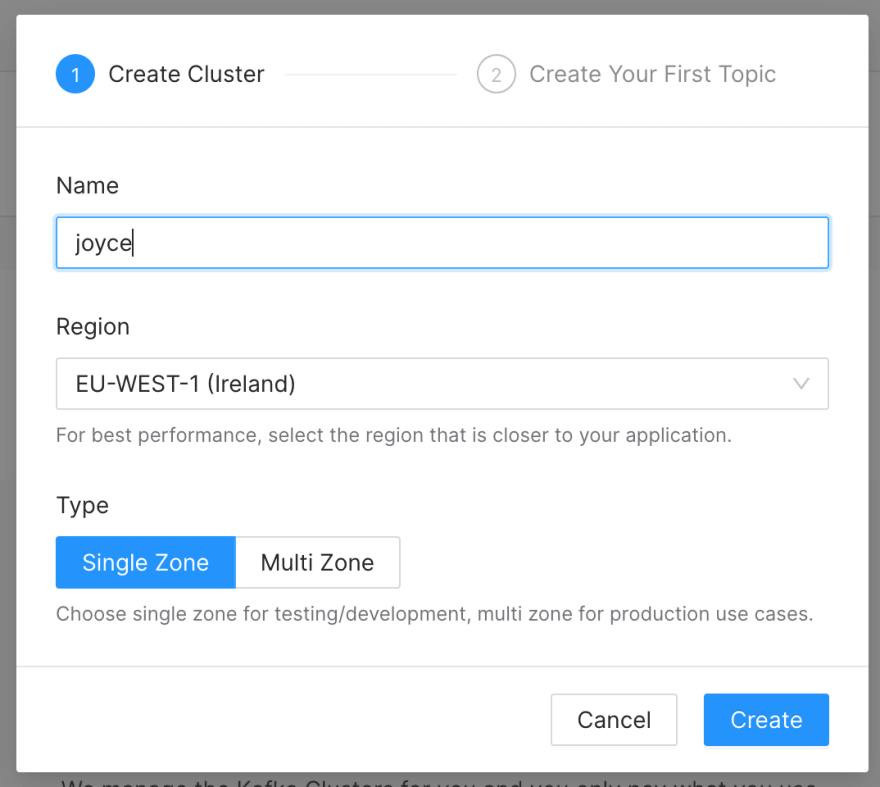 We will the create our first topic and choose our desired number of partitions. Partitions are how Kafka provides redundancy and scalability, and each one can live on a different server. This is a very important concern for performance and scaling. 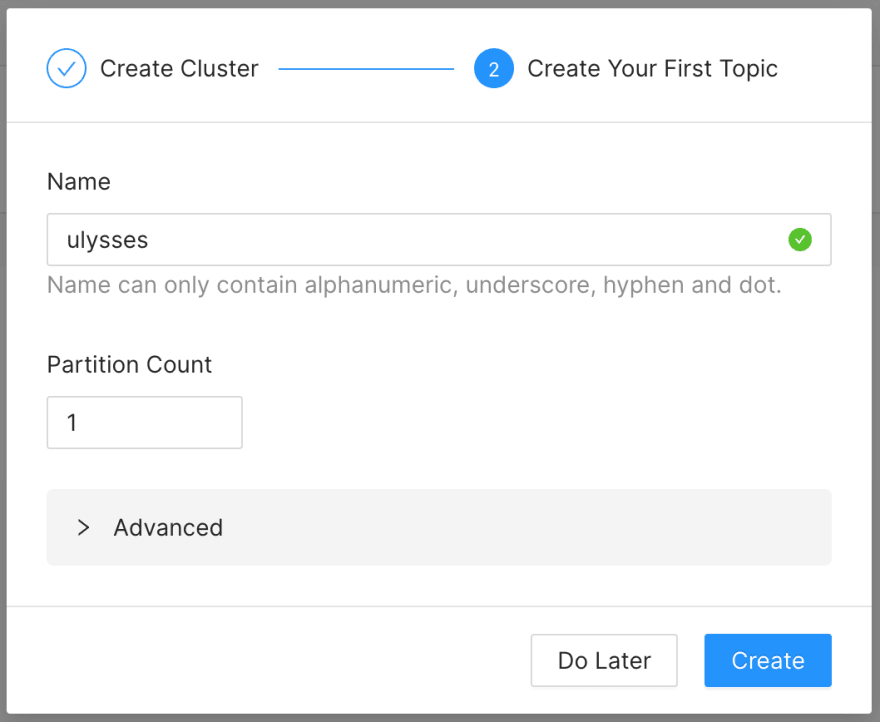 In the advanced options for topics, there will be several options with sensitive defaults. Some configurations will require an upgrade in your plan. So, plan for the go-live depending on your application needs. 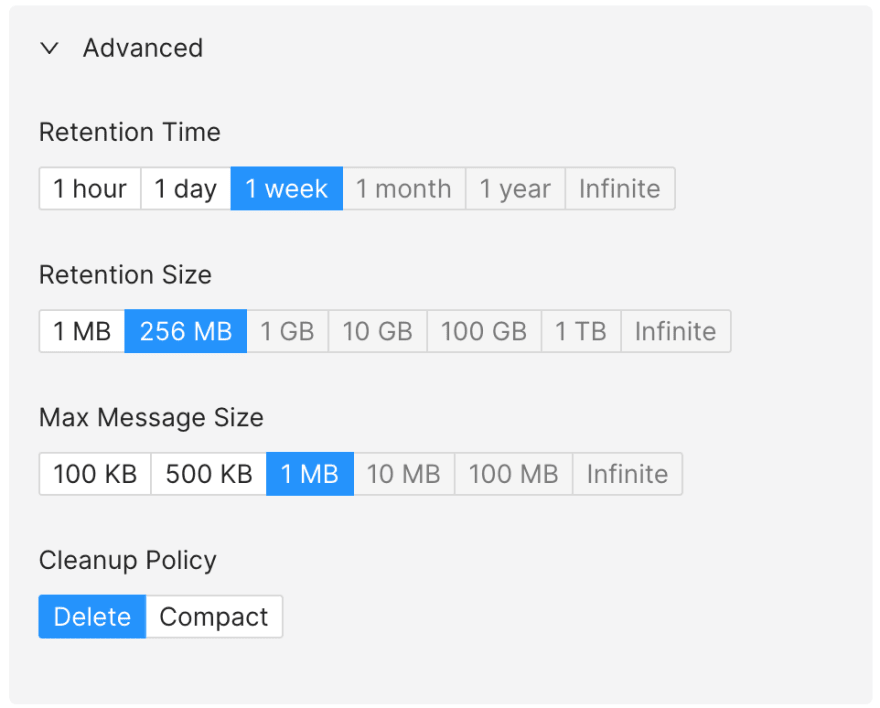 And… that's it. No need to worry about servers. 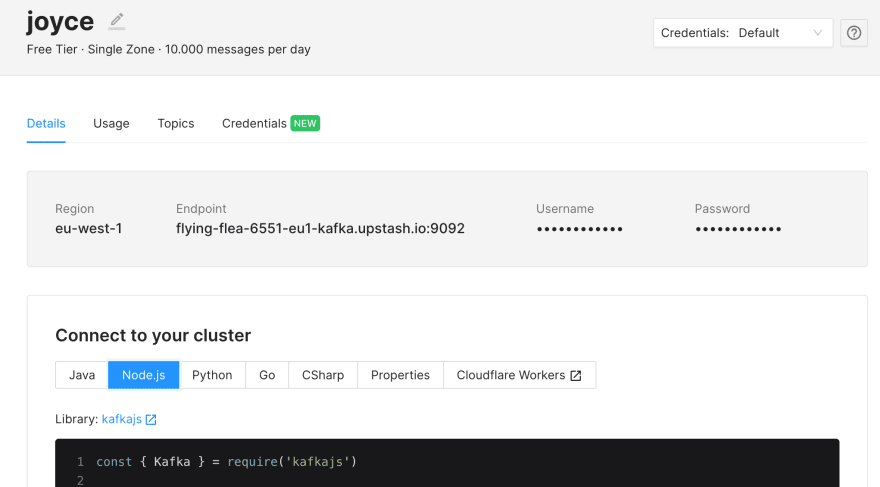 For this tutorial I will use Node.js on an AWS Lambda. Code is available in this GitHub repository using TypeScript:

🐚 Kafka on the Serverless Shore

Kafka on the Serverless Shore

Read Kafka on the Serverless Shore: Building event-driven applications with Kafka for context.

If you need help with all the above, open an Issue to see if there's enough people interested in a tutorial for that.

Fill .env with your credentials and names.

Remember if you have multiple AWS profiles in your machine to pass the flag:

I'll use the vendor package (@upstash/kafka) that leverages the REST API. Since we are at the shore, we'll not go open sea and build a ship. Not even a boat. We'll just get our feets wet.

I'm writing an application that will read something, from some author. And post every line to Kafka. Then, I'll consume after that.

Basically is just two lambdas, one for each endpoint: a writer and a reader.

And we'll use my topic ulysses. I could send all lines with page numbers from the book Ulysses from James Joyce. Or analytics data. Or log data. You get the gist.

And to consume is simple. Note that I have there two hardcoded values, consumerGroupId and instanceId. You, at the time, basically can send whatever you want in the first request and Upstash will provision for you.

Little TypeScript goodie. I'm using the flag useUnknownInCatchVariables: true in the tsconfig.json file, so the catch is of type unknown. Hat tip for Mike North to show the way.

And now we can start writing and reading. To write is just a POST.

To read, we'll use another POST, but beware: Here comes something important about distributed systems. We have eventual consistency. Which means, your application cannot rely on the data being immediatly available for you just after the write. If you do, you could get... nothing, like a empty array in this case:

But, after very little time, you can see all data available in the topic: 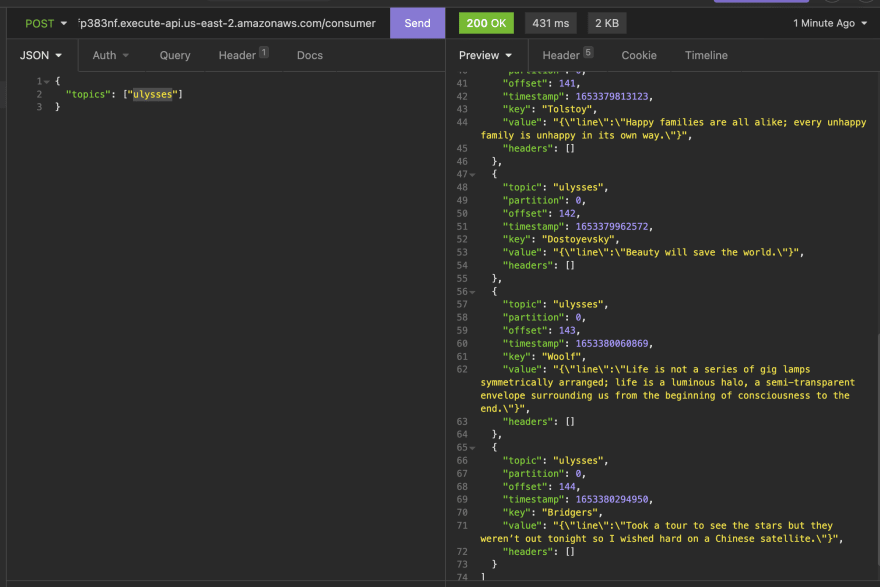