API (Application Programming Interface) is a technology that allows two systems to talk to each other based on an agreed protocol. It sits between a client (consumer) and the backend (provider).

This series explores the AWS services that provides this functionality from development up to deployment. Two major services are highlighted for this purpose:

Both services are serverless meaning developers can focus on developing code and not think about maintaining the underlying infrastructure.

Note: This demo extends this YouTube tutorial of Complete Coding by further exploring deployment with stages. Stages allows for multiple deployments of an API, which can be used in various use cases such as deploying a development and production version of an API in the same AWS account.

We will be developing the sample API in TypeScript. Typescript is a strongly typed programming language that builds on JavaScript with the benefit of catching mistakes early and provides a more efficient JavaScript development experience.

To create the project, we will use a boilerplate code of serverless by running the code below.

In serverless projects, there is a file in the root folder named serverless which is a configuration file that tells details of the cloud services being deployed and how they will be deployed. Since the template used is in TypeScript, the serverless file created will also be in TypeScript.

I personally find yaml files easier to read for configuration files, so I've replaced the ts file with it's yml equivalent.

You'll notice that it has been created with a service name (serverless-api-demo). Custom section is not included here but it is a section that allows you to create custom variables. Plugins is a list of plugins that you need for the project. Provider section is the configuration for the cloud provider where the services will be deployed. There is also a section for functions, where you can add the function handlers configurations of your code.

In the tsconfig.json file, make sure you're also updating the included file from serverless.ts to serverless.yml.

Now let's add a simple function. Functions in AWS is a Lambda concept that you can invoke with a trigger to run your code. Under /src/functions folder, create a folder named person and create a file named getpersondata.ts. This file will contain a function that will accept a name parameter and respond with the personal information of that person from a static data.

Let's copy the contents of handler.ts from the template and add it to this file. Now, first thing to do, let's add the schema (type) of the static data object. For simplicity, we'll limit the details to fullname and nickname.

Next, let's create the static data

Let's also define the possible responses of the function.

Lastly, let's edit the existing function code. Let's rename hello function name to getpersoninfohandler. This function will still receive an event like before, and will return back a JSON object. Update the function with the following code:

Notice that the function handles two scenarios, when it didn't receive a name parameter or the name is not found in our static data, it will respond back with a 'Personal Data Not Found!' message, and will respond with the person's information if found. Make sure you add export on the handler const for other files to access the code in this file.

Go back to the serverless.yml definition and replace the functions section with the following code:

This configuration exposes a path to accept a name parameter, and links it back to our code handler.

Deploying the API to AWS

Before we can deploy our code to AWS, we need to create a user that has programmatic access to run aws-cli to our AWS account. To do this, follow the steps below:

Going back to the project, run npm install to ensure that you have the required dependencies in your local machine to provision the resources in AWS. Then run the deployment using serverless:

The API is now deployed!

Testing the API with Postman

You should notice that serverless prints out the created endpoint to the screen. By default, serverless also deploys to the dev stage and the API endpoint should have this in the path as well.

You can copy this endpoint in Postman and replace {name} with a value from our static data. You should see the response as a JSON object with the person data tied to the name key. 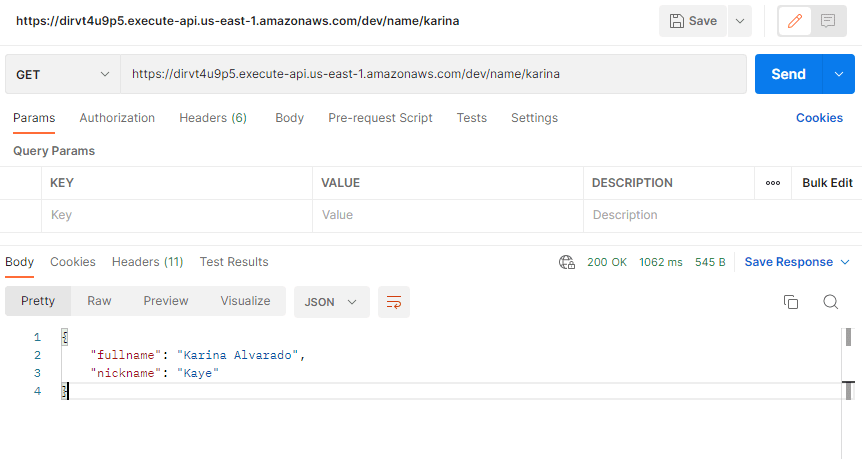 Deploying stages of an API

If you want to change a function of an API and don't want to touch the current deployed version, you can make use of stages. In your serverless.yml code, add the custom section below:

Then, in the provider section, add a reference to this parameter

The code uses dev as a default stage, which can be overriden when the user runs the deploy command with a stage parameter. Try to deploy a prod version of the API:

You should now have a new API deployed in PROD stage.

Below are a few more concepts in API Gateway and Lambda that you can further explore after this tutorial:

Getting Into the Serverless Mindset

Once unpublished, this post will become invisible to the public and only accessible to Kaye Alvarado.