Load balancing is a technic of distributing load traffic -such as network traffic- to prevent the data loss, and thereby to improve the system security. So basically it is a feature which gathers traffic data from a cluster of servers or network equipment, and distribute it to another cluster with a pre-configured load balancing algorithms.

The most used industry standard algorithms are branched into two categories:

Round robin: Allows to distribute traffic to a cluster of servers, virtual machines or network equipment by using Domain Name System (DNS) records.
Weighted round robin: It is a 'round robin' except the weight of each server is configured manually by the operator.
IP hash: Combination of source and destination IP addresses decides where the connection is assigned next. This combination is calculated with a mathematical function to convert it to an IP hash.

If we understood the load balancing and its main algorithms, then we can start talking about what a load balancer is. It is a device which supports all of these features mentioned above. An LB is generally grouped as Layer-4 (L4) or Layer-7 (L7) due to the networking protocols it uses. 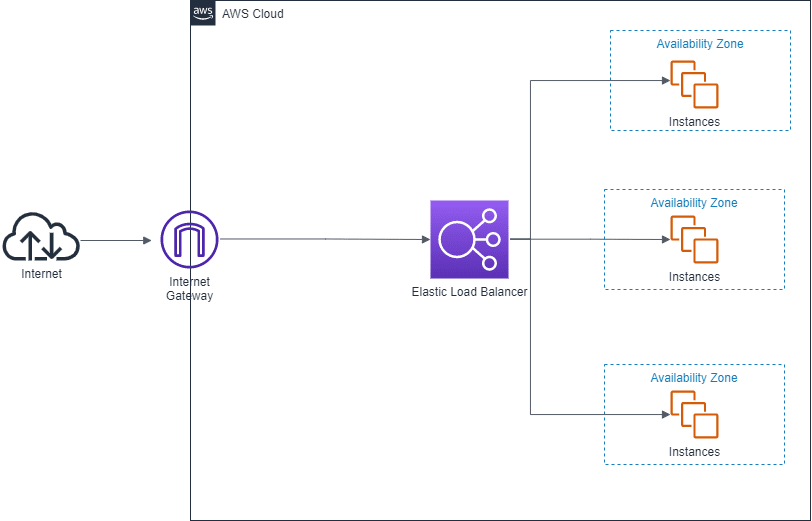 The concept has a bit more features on the cloud side. The main difference is the elasticity. So it is now called 'Elastic Load Balancing' on AWS. As the official document says, 'Elastic Load Balancing automatically distributes your incoming traffic across multiple targets…', therefore different types of load can be forwarded into various kinds of instances.

Before diving deep in the AWS ELB products, let's find out what the cloud-based load balancer benefits are. First of all, it allows to increase the data protection and prevent any kind of data loss. It is important especially when the flow contains sensitive data. Secondly, it has the elasticity and flexibility to enhance its fault-tolerant architecture. Adding or removing a load balancer is as easy as pie. You can manage your incoming traffic into a single or multiple Availability Zones without disrupting the flow. Also this main feature enables to handle high throughput including a suddenly increased traffic patterns. Third one is about configuring health checks to monitor the status of the resources. With this feature, the load balancer understands which path is healthy and which one is not. And finally, the capability of cloud-native working environment helps to ease cloud migration. This is very important because it exhibits the product's difference compare to the traditional load balancers.

So what are AWS Elastic Load Balancer types?

For more about AWS Elastic Load Balancing, you can dive deep into the documentation here.

What are AWS credentials?

Once unpublished, this post will become invisible to the public and only accessible to Bugra Kilic.