AWS has over 180 different services with a myriad of different names and it can be incredibly hard to figure out where you should run your applications. In this post, my goal is to make it a bit easier for you to get started with AWS, and know what services you should consider researching moving forward.

We'll start with a quick introduction of some of AWS most popular and well known services, just to get a brief understanding on what services we are going to be talking about later:

For a quick and dirty suggestion to where you can run your application, here is a quick flow diagram: 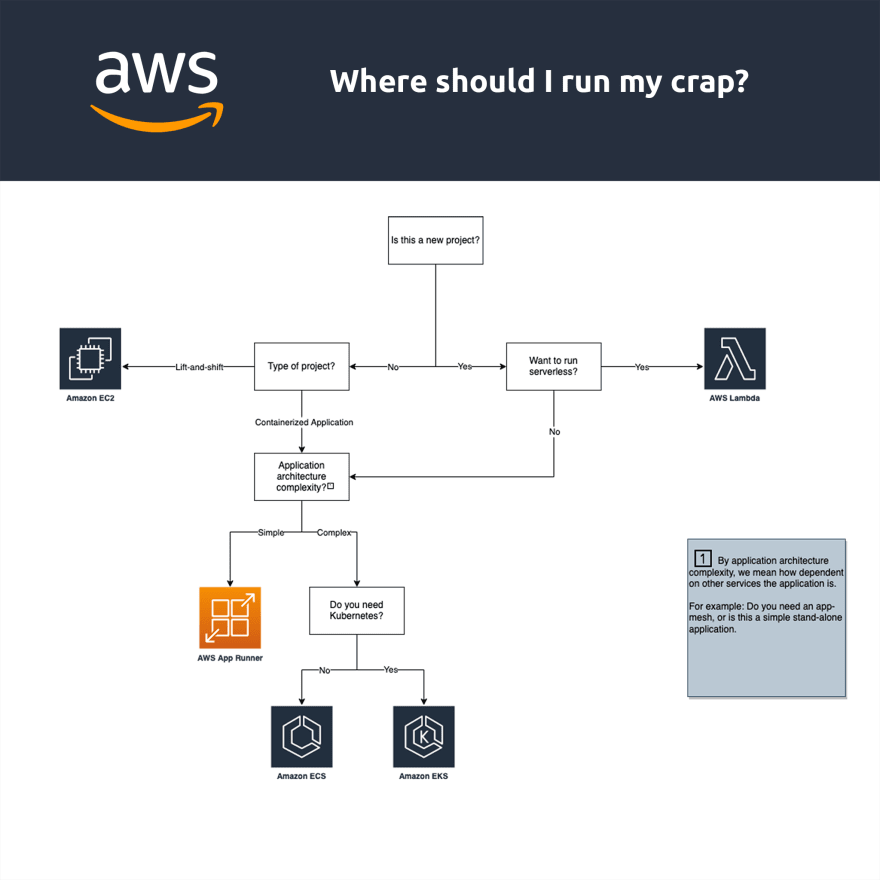 What are you trying to run?

With the services primer in place, the question becomes "What are you actually trying to run?" and "how do you want to run it"?

On top of all the traditional database types, AWS also has a number of other databases such as Amazon ElastiCache with support for Redis and Memcached, graph databases with Amazon Neptune, data warehouses with AWS Redshift and more. All of these are well documented and often require some special use case, so I’m not spending much time on them.

A lot of these services mentioned in this post are Amazon proprietary software, and a question we get a lot when working with cloud, is customers being worried about being locked into a vendor and not being able to move to a different cloud vendor at a later point if needed.

This is very much a valid concern that the business needs to consider when building their cloud infrastructure, and I’ll provide a few observations from my years working with all three major cloud vendors.

For a vast majority of companies, a migration will be a costly job no matter how you design your infrastructure, including just using non-propriatorey solutions, so for most, it is much easier just to use the services you need to, in the first place and deal with it, if it ever becomes a problem. Trust me, your engineers will be much happier.

Amazon Web Services consist of a vast web of interconnected services, and with over 200 different services with confusing sounding names, it can be a very complicated and confusing area to get into. Starting with the basic services mentioned in this post, can be a great starter for a lot of users that are just getting into cloud computing. As with most AWS services, all the services listed here integrate very well with the rest of AWS and allow you to keep expanding on and further build your infrastructure.

If you have recently started using AWS and want to know where to go from here, I highly recommend looking into the study materials for some of the AWS certifications. You don’t need to take the certifications if you don’t want to, but the materials for certifications such as the AWS Certified Developer - Associate give you a great introduction to a vast number of services in a short amount of time.

And if you're ever in need of help picking a service, or have questions about how you should run your crap - feel free to reach out to me!