It starts with one clarifying email. Then a follow-up Slack message turns into a cascade of notifications that completely dissolve your productivity.

Nothing throws a wrench into a spinning product development cycle like multiple rounds of ineffective feedback because of confusing or incomplete information. Unclear expectations and poor communication during the design stage of a project are the two most common reasons for the mass of emails, Slack messages, and Jira tickets that can bring a developer workflow to a crawl.

By tackling these two leading causes of miscommunication between teams, developers can cut down on the unnecessary back-and-forth and keep projects moving.

One of the best ways to stem unnecessary messages around a developer workflow is to establish clear expectations at the beginning. This starts with a Purpose Meeting: a 30-minute gathering of stakeholders, including engineers, developers, data specialists, and the PM, to make sure everyone understands not only the “what” of the project but also the “why.” Consider creating an agenda so all the stakeholders understand their role in the meeting.

During the Purpose Meeting, create a tracking plan that clearly outlines the project’s purpose and the best way to fulfill that purpose. There should be no doubt among the stakeholders what the end product should look like. This document should explain the goals, metrics, and data needed so everyone knows the final destination before a single line of code is written. Keep it simple and only focus on the data that aligns most closely to your goals.

The three primary goals of a Purpose Meeting

This meeting and the resulting document will ensure everyone involved understands the success metrics for a project. Keeping the document in a central place such as Avo, Notion or GitHub, where everyone can refer back to it at any point in the development process, will eliminate unnecessary confusion.

Communicate in Context With the Data

When you have data in a Google Sheet and communication in Slack, miscommunication is bound to happen. An update won’t get documented, or the PM will ask for a change to one piece of the project, but the developer will think they’re referring to a different piece. Cue notifications.

A simple way to avoid this type of confusion is to communicate in context with the data. Using the same platform to discuss and manage the data helps make sure all teams are discussing the same issue. Tools such as Branch Collaborators remove both knowledge silos and barriers to collaboration while eliminating miscommunication between iterations. These tools allow you to have a focused conversation around the changes made. They also provide a living record of incremental changes, which makes it much simpler to onboard new developers to a project. 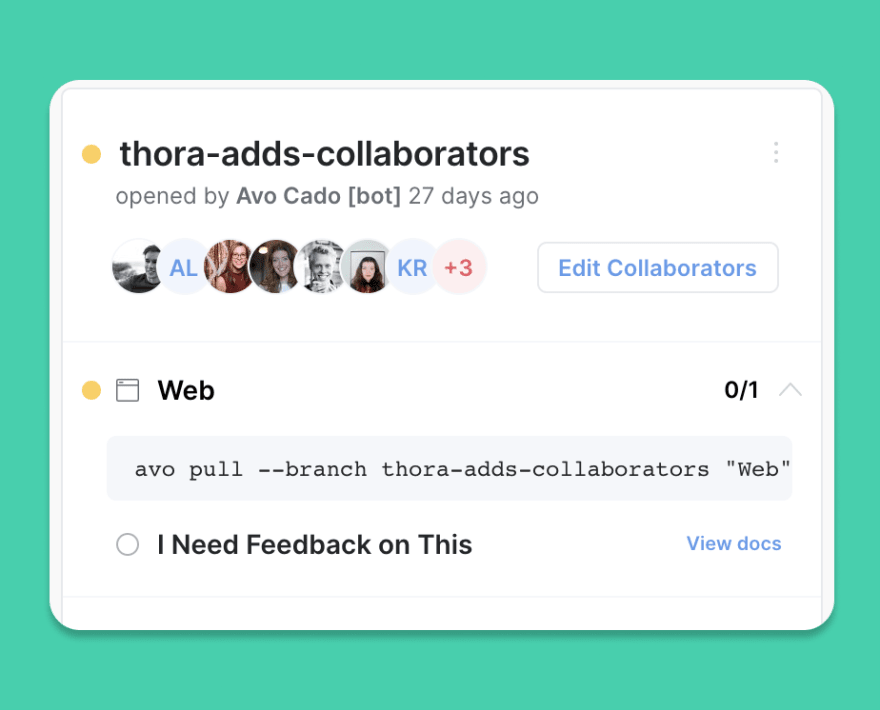 Before adopting Avo, Patreon was struggling with an inefficient developer workflow. The teams behind the international membership platform faced rounds of ineffective feedback around every launch. Unsurprisingly, this slowed down launches and kept teams from getting the data they needed.

But by switching to a platform where the feedback can happen alongside the data, Patreon’s data and development teams could both work in a specific branch for changes and QA. Working in context with the data helped the teams replace an error-prone process with an alignment that allows them to ship faster and move on to new projects.

Integrate Validation Tools to Catch Problems Before the Analytics Destination

Even with a clear design scope, updating complicated code can cause tracking to break or unexpected problems between platforms or code paths. These types of problems can take months to identify, let alone fix, and become a huge drain on developer resources. Not to mention that this can cause the longest-running email threads.

By incorporating tools with type safety that validate implementation, the development team can catch missing data or discrepancies in code paths before the product is released. This not only improves the data quality of the product, but it also eliminates a huge source of frustration for many teams.

The challenge for Secure Shell (SSH) client Termius was keeping analytics consistent across the multiple platforms they serve. This involved a number of applications and codebases, and the added complexity increased the probability of errors significantly. Minor issues would cascade into a mountain of data debt. Each fix slowed the developer workflow, kept projects from moving forward, and delayed decisions that hinged on the insights from the analytics.

Using a system that helps remove data debt, standardize boilerplate code, and validate updates not only gave time back to Termius’s developers, but it also provided trust in the data.

“Avo’s biggest impact was in reduced overheads on analytics. We’re not only saving time for developers and product managers on designing, implementing, and verifying analytics, but developers are also relieved that they no longer have to monitor the analytics after every release, to make sure the tracking didn’t break,” said Kirill Yakovenko, a product manager at Termius who heads up analytics quality.

The typical development workflow is ripe for miscommunication and the resulting flood of notifications across teams. One Avo client reported that 25% of their Jira tickets were associated with the back-and-forth confusion that comes from incomplete information. A solid process for validation and clear channels for communicating around the data keeps projects moving smoothly so developers can get back to building and shipping great products.

Looking for a tool that can help your teams communicate effectively around analytics management? See how Avo can get your developer workflows moving again.

Why You Should Keep A Dev Diary

Chrome Extensions of the Month - August 2022

Avo
Avo is a next-generation analytics governance tool improving how product managers, developers, and data teams plan, track, and govern product analytics across organizations. Learn more at avo.app
How to Get Everyone in Your Organization on Board with Your Tracking Plan
#leadership #analytics #operations #management
Data Best Practices to Make Your Datasets More Convincing and Less Confusing
#datascience #analytics #productivity #management
3 Myths and a Truth from our CEO: What it Takes to be a Successful Tech Founder
#career #leadership #interview #techtalks

Once suspended, avohq will not be able to comment or publish posts until their suspension is removed.

Once unsuspended, avohq will be able to comment and publish posts again.

Once unpublished, all posts by avohq will become hidden and only accessible to themselves.

If avohq is not suspended, they can still re-publish their posts from their dashboard.

Once unpublished, this post will become invisible to the public and only accessible to Avo.

Thanks for keeping DEV Community 👩‍💻👨‍💻 safe. Here is what you can do to flag avohq:

Unflagging avohq will restore default visibility to their posts.