Vim, one of the oldest contestants in the text editor war, ever since its release in 1991. It has been a friend to many and a foe to many, wanna find out what it will be for you? Then, let's try it out!

I have been using Vim for about a month and a half now, and I have been loving it (the first week was a bit painful though).

In this article, I'll be discussing why to use Vim, how to set it up, and some basics of Vim.

Why To Use Vim?

Now, don't fight with me, I am not comparing Vim with any other text editor. I am just telling you what Vim has to offer.

Don't freak out if you haven't heard of Neovim, it's nothing scary. Neovim is just an implementation of Vim but more focused on extensions and plugins, a bit less customizable than Vim. Often people don't say they use Neovim, they just call it Vim. It really doesn't make much of a difference, just that Neovim has more support for plugins. Also, the default keybindings and commands for both are the same, so, if you learn Neovim keybindings you can as well use Vim.

For Mac & Linux machines, do either of the following depending on your package manager:

Vim (not Neovim) is installed by default on most Linux machines. You can run it by typing vi or vim.

Just in case, you opened it right now without knowing the keybindings and are now freaking out, just type :q! and press enter to exit.

For windows users, you have two options:

To install scoop, type the following into your terminal:

winget is another package manager that comes pre-installed in windows nowadays.

If it tells you to install additional buckets, do it too.

Close and reopen your terminal and you can open Neovim by typing nvim.

Just in case, you opened it right now without knowing the keybindings and are now freaking out, just type :q! and press enter to exit.

This is how it looks right now: 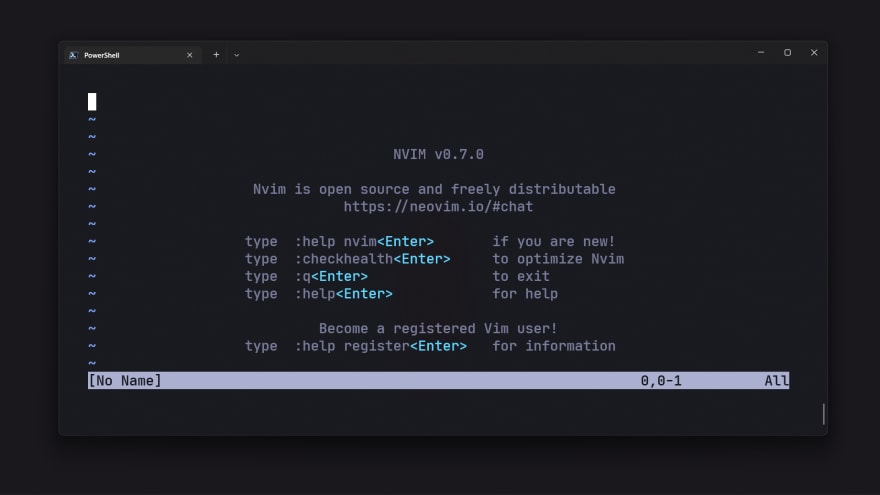 Right now that doesn't look very good, does it?

You will have to create a configuration file for neovim first.

For Linux & Mac Users, the config file should be created at ~/.config/nvim.

For Windows Users, the config file should be created at ~/AppData/Local/nvim.

(In the above ~ represents the home directory)

Open your terminal in your respective directories. Create the file, its name shall be init.vim. In this file, we will be using vimscript to write our configuration.

Quick note: You can also use init.lua instead of init.vim, more about that towards the end, in this article I will be following with init.vim.

Now, we are going to configure Neovim using Neovim (sounded pretty weird to me the first time).

Go to the directory mentioned above inside your terminal, and type nvim init.vim and press enter.

Quick note: If you just type nvim without mentioning any file, it will open up something like a welcome page. If you type nvim file.md and file.md does not already exist, Neovim will open it and if you save it the file will be created. Same rules apply to Vim too.

Now, no need to click anything, forget you have a mouse, once that intimidating text editor is open in front of you, just press i (no shift key, no ctrl key, just plain simple little i), this lets you enter insert mode. Now, you can edit your file normally. To exit insert mode or rather any mode in Vim in general, press the escape or esc key, this doesn't exit the editor just returns you to normal mode (the default mode).

You can also use arrow keys to navigate the file for now.

Before jumping on to plugins let's set up some basic rules/settings:

Quick tip: If you don't understand what a certain setting does, just open Vim and in normal mode type, :help <property_name>, for example for shiftwidth, do :help shiftwidth.

Next, press esc key to exit insert mode. Now type :wq (no need for clicking anywhere or pressing all those ctrl & shift keys) and press enter, this will write to file (basically, it will save the file) and then exits the editor.

If you use just type :w, it just writes to the file, it doesn't exit the editor.

If you use just type :q, it exits the editor, but it won't let you do that if you have unsaved changes, in that case, do :q!, this will revert all unsaved changes and exit the editor forcefully.

If you want a property I haven't mentioned here, just search it up, I am sure you will find it.

Let's set up the plugins now!

For Unix/Linux, you can install vim-plug with:

Check out their install instructions for more.

Now open init.vim in neovim again, and navigate to the end of the file, you can also use arrow keys, don't press i this time, press o, this will make a new line and enter you to insert mode. Now type in the following (after the basic rules):

Quick note: You can use " to write single-line comments in vimscript. For example " This is a comment.

All our plugins will go in between the call plug#begin and call plug#end.

Here are some of the plugins I use:

Quick note: Always remember, before you install a plugin, do check out its docs before installing, because sometimes they may have special instructions on the setup for a plugin

Once it's done, save the file and exit Neovim (remember, use :wq and press enter). Reopen Neovim. To install these plugins, type :PlugInstall in normal mode and press enter. This will open another pane and start installing all the plugins, once it's done. Close the pane (:q), then close init.vim too. This exits Neovim, now, re-enter and all the plugins will start to work.

Well, LSP (Language Service Provider) is the thing that gives you language support (language support in an editor means it points out your mistakes and offers suggestions while coding for a specific language). It is also built-in neovim since version 0.5. We won't be configuring the native LSP here, instead we will use coc.nvim.

Coc.nvim is an ecosystem that builds beyond the native LSP, meaning you don't have to configure anything. It brings autocomplete, suggestions, and some other stuff. It's recommended for beginners as there is not much setup. We already installed coc.nvim earlier as a plugin.

Well, with that out of the way, we can install the support of coc for our used languages. For example, if you want to install the support for python, just do :CocInstall coc-python. Most languages will have their support as coc-[language-name] but just to be sure you should just google it, you will easily find it.

Now, take a moment and feel proud, you have conquered a bit of the fear of vim.

In vim/neovim, you can set up your own keybindings apart from the ones already there.

For example, let's say I want to set up a keybinding for closing a file in Neovim. So, in general, I would have to type :q.

To do that at the end of your init.vim file (after the call plug#end) add the following:

nnoremap is a declaration that you are setting a keybinding, so you will have to put that before declaring any keybindings.

Here, in <C-q>, the "C-" stands for the ctrl key, followed by whatever key you want to use in combination with it. For example, <C-q> means ctrl+q and <C-k> means ctrl+k.

In between, <C-q> & <CR> is the command for which this keymapping is.

<CR> represents the enter key. So, nnoremap <C-q> :q<CR> means you have to press ctrl+q and it will be the same as typing :q and then pressing enter.

Since, we installed plugins, like nerdtree, they brought their own commands for us, for example now you have access to :NERDTreeToggle and :CocInstall.

So here are some keybindings you can setup for nerdtree:

This keybinding is from their readme on their GitHub repo, but you are free to change it, you can make to if you prefer, whatever suits you. Just keep in my mind, not to have conflicting keybindings.

You must be wondering though, what is that <leader> over there. That stands for \, so nnoremap <leader>n :NERDTreeFocus<CR> is means you have to type \n and it will run :NERDTreeFocus command.

After setting up the keybindings for nerdtree, you can press, ctrl+t to open it up, you can navigate it just like you would a file with arrow key or [h, j, k, l] keys. To delete or rename a file, press m, and it will open up a menu listing out how to do it. To create a file, navigate to the node you want it to be in, and then press m to open up the menu.

That about wraps it up.

You can install Themes the same way you did with plugins. You can search about the themes, there are many out there. I personally don't use any theme because my terminal's theme is good enough for me.

Don't worry, I have listed some resources for you to find a good theme at the end of this article.

Earlier, I stated that you could have put your config in init.lua too. Many people prefer to use Lua because it's more logical than Vimscript.

If you wish to convert your init.vim to init.lua, you can check out this article by Olivier Roques.

If you have followed everything in this article, your init.vim should look something like this now:

This is how it looks now: 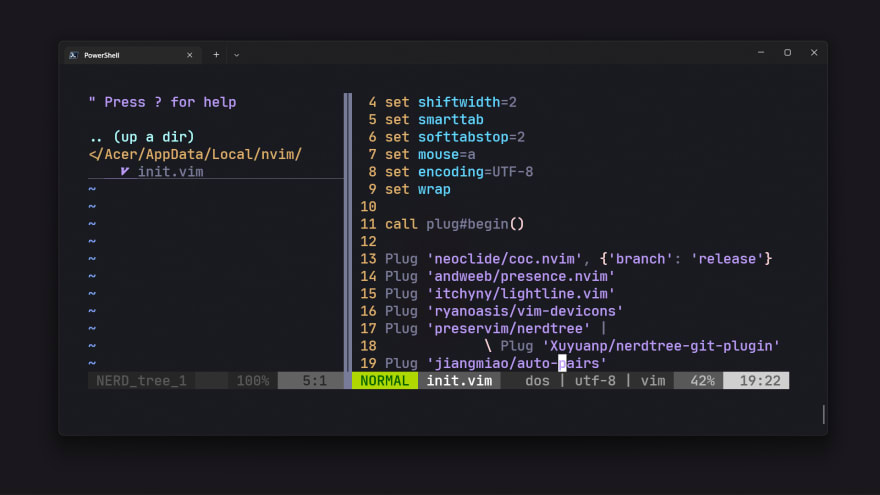 Take a deep breath, and feel a sense of accomplishment, you are done. Now, go ahead experiment with it and make Vim you own.

Here is a vim cheat sheet from devhints. You can check it out for more commands.

If someone wants to point out something that I missed or any other resource or just has doubts about something I wasn't able to explain properly, please comment it down below.

Once suspended, aviavinav will not be able to comment or publish posts until their suspension is removed.

Once unsuspended, aviavinav will be able to comment and publish posts again.

Once unpublished, all posts by aviavinav will become hidden and only accessible to themselves.

If aviavinav is not suspended, they can still re-publish their posts from their dashboard.