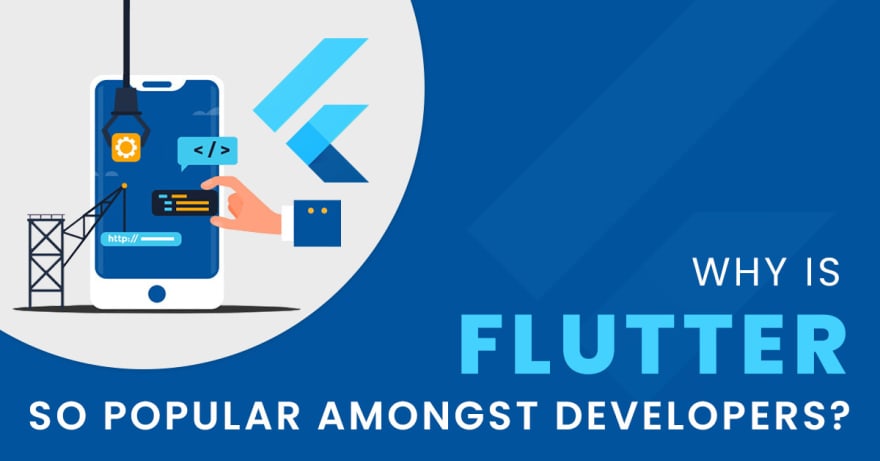 Digital businesses need to select mobile technologies that can help them build user-friendly and stable apps. The goal of every business is to create a memorable digital experience regardless of the user's mobile device or operating system. Organizations that fail to do so risk falling behind the competition.Companies want to launch their Android and iOS need to build two separate native apps; hence, cross-platform development has emerged as a cost-effective alternative to native app development

In contrast, a cross-platform app can work on both platforms with ease. In recent years, many cross-platform app development frameworks like React Native, AngularJS, and Xamarin have emerged. Flutter is relatively new entrant in the game, but it has gained immense popularity in the developer community. Many companies have adopted Flutter to develop their apps. The top apps built using Flutter include

Let us look at the various traits of Flutter that help attract developers to the SDK.

While 2020 was a difficult year for most people, for Flutter, it was a year of significant growth. In 2020, Flutter reached its peak of popularity according to Google trends.

Flutter has overtaken React Native, its closest competitor. React Native was released 3 years earlier than Flutter and was among the most popular cross-platform app development technologies. 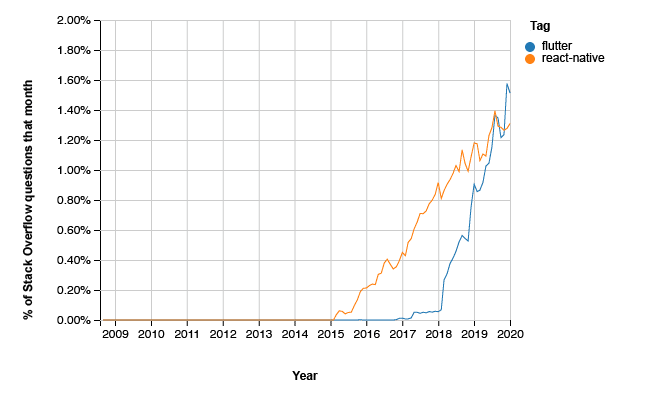 The reasons for the popularity of Flutter

Data shows that Flutter has emerged as one of the most popular app development SDKs. There are various reasons for Flutter's popularity. We have discussed some of the major ones below.

With Flutter, the developers can write code once and run it on any platform. This means that the developers can build a single application and run on two or more platforms such as iOS and Android using a single codebase. This functionality of Flutter helps reduce the time taken to launch the application. A single application built using a single codebase would take much less time to write and test than writing code for two separate applications. The hot reloading feature of Flutter also helps reduce the development time significantly. This is because the hot reloading features eliminate the grade rebuild time, which otherwise slows down the development.

Google has developed Flutter on DART-its programming language. The benefit of DART is that it is a statically typed language that allows the developers to write structured code. The structured nature of DART helps the developers easily build more complex applications that have hierarchical structures. In addition, DART has clean and powerful syntax; it allows the developers to build clear architecture and design for any application. DART is developed to encourage the programmers to build low-maintenance apps with common standards, durability, and improvedefficiency.

Though there are cross-platform app development frameworks, they cannot produce cross-platform apps that perform like native apps. This is because these frameworks just-in-time compile the UI experience in JavaScript. On the other hand, Flutter provides a "write once" compile anywhere approach since an app built with Flutter is compiled ahead of time.

Flutter is backed by Google and this fact ensures that the Flutter developers will have the support of a technology major. Google consistently supports the developers with frequent updates and fixes the bugs immediately. Google released a major update of Flutter called as Flutter 2.0 that will allow the developers to build web apps. To boost the adoption rate of Flutter amongst the developer community, Google continuously organizes several Flutter technical events. These Flutter events help startups as well as established businesses to catch up with the latest developments in Flutter and learn how Flutter can help them grow their business.

An extensive catalog of open-source packages

The Flutter developers have access to a huge set of open-source packages, which enable them to build high-quality apps faster. Although comparatively small, the library of readymade tools and packages in Flutter is growing fast. Google has provided more than 15,000 packages to aid the Flutter developers. In addition, Flutter has a rich set of widgets for Cupertino and material design. These widgets help the developers render interactive UI on Android as well as iOS platforms easily.

Firebase is another Google platform that allows developers to build high-quality mobile apps quickly. With Firebase, the developers get out-of-the-box support for a wide range of services like real-time databases, authentication, hosting, cloud storage, and cloud functions. The infrastructure is serverless, scalable, and redundant, meaning that the developers do not need to spend a lot of time and resources to build the backend. In addition, there are various high-quality Flutter app templates available in Firebase that help the developers finish the app development process faster. Google has enabled simple integration of Flutter with Firebase.

Flutter supports a wide range of Integrated Development Environments (IDEs) and popular code editors. The developers can easily add Flutter as a plugin in VS Code, IntelliJ IDEA, and Android Studio. This proves to be a significant advantage as it allows the developers to write code using debuggers and automation tools, which boosts the development team's productivity levels.

One of the greatest strengths of Flutter is its extensive collection of widgets. With Flutter, the developers experience a high freedom in building the user interface regardless of the platform. This is because Flutter uses its own rendering engine to draw the widgets. Flutter helps developers use material design for Android and human interface for iOS, which is a limitation with other cross-platform solutions. Unlike Flutter, when one develops apps with other cross-platform solutions, the app looks the same on iPhone and Android. This is an issue because the app would not be able to utilize the unique characteristics of each platform. This would eventually affect the app's performance, and it won't be able to achieve near-native performance like an app built with Flutter.

One of the significant benefits of Flutter is that it is equipped with packages that contain a set of custom widgets for both operating systems. Due to Flutter's beautiful and customizable widgets, the developers can build Flutter apps that look and feel great. The developers can either use ready-made widgets from Material-UI or implement specific components into their UI based on basic widgets. Flutter also enables the developers to build custom widgets. In addition, Flutter provides great flexibility to work with gesture processing and animation.

Support from the Flutter team community

Flutter developers enjoy the support of a large developer community. This support is in addition to what Google provides to Flutter developers with frequent updates and issue fixes. Since its first release, Flutter now has 81,200 (and counting) stars on GitHub.Flutter mobile app development becomes easy due to the friendly developer community. In addition, Google organizes several events that help both the startups and established businesses catch up with the latest developments in Flutter.

Flutter helps companies achieve the goal of cost-effective development. As Flutter helps developers build efficient cross-platform apps, it saves business owners money that they would have otherwise spent in building two separate iOS and Android apps. This is because while a single team is sufficient to build an app with Flutter, to build two separate native apps, one would need to hire two separate teams, which would double the costs.

The hot reloading feature of Flutter helps the developers reduce the development time, which helps save costs. To perform smoothly, every app must be tested extensively. It would take a lot of time to test two native apps. With Flutter, this testing time can be reduced as the app undergoes all the quality measures only once saving a lot of time and efforts. The reduced testing time translates into lower costs as fewer hours are utilized in testing. As Flutter is open-source, the business does not need to pay any licensing fees to use Flutter.

Developers can find more than enough reasons to take up cross-platform development on Flutter. For instance, it alleviates many pain points faced by developers searching for a robust platform that allows them to build apps for multiple platforms. Flutter provides many advantages to businesses that choose to adopt it to develop their product. However, being a relatively new technology, it is hard to find experienced Flutter developers who can build an app according to the desired specifications. At TopDevelopers.co, we have enlisted the top Flutter app development companies to help aspiring entrepreneurs achieve their dream of building a top-notch Flutter app.

Avantika Shergil
An enthusiastic Operations Manager at TopDevelopers.co, coordinating and managing the technical and functional areas.
How to Improve Team Collaboration With DevOps Culture and Bring Teams Together? CodeIgniter vs Laravel, which is a better framework? Hadoop vs Spark: Which is a better framework to select for processing Big Data?
#bigdataframework #hadoop #spark #bigdata

Once suspended, avantikashergil will not be able to comment or publish posts until their suspension is removed.

Once unsuspended, avantikashergil will be able to comment and publish posts again.

Once unpublished, all posts by avantikashergil will become hidden and only accessible to themselves.

If avantikashergil is not suspended, they can still re-publish their posts from their dashboard.

Once unpublished, this post will become invisible to the public and only accessible to Avantika Shergil.

Thanks for keeping DEV Community 👩‍💻👨‍💻 safe. Here is what you can do to flag avantikashergil:

Unflagging avantikashergil will restore default visibility to their posts.