Welcome to Part 3 of this series on dagger.android. If you're just joining us, you can check out the first two parts here:

As we all know, it would be Very Bad to attempt to perform constructor injection on a Fragment.

There's a reason Android Studio's new-fragment wizard always adds a default (no-arg) constructor, and that reason is that the framework may sometimes have to recreate your fragment later, and if it does so, it will call the no-arg constructor, leaving your app in a bad state or even causing a crash if you don't have such a constructor available. This is why code such as this is so common:

We do this because the framework can re-use the Bundle of arguments later on, but it can't remember that you called a non-default constructor. This begs the question, though: how do we inject complex objects?

The first thing we have to do is implement the HasSupportFragmentInjector interface. The most logical place to do this is on the Fragment's host Activity, but you can also have your custom Application class do this (you'll see an example of this later on).

You will recognize this pattern from Part 1, when our MainApplication implemented the HasActivityInjector interface and was injected with an instance of DispatchingAndroidInjector<Activity>.

Implementing that interface isn't quite enough. We also need to let Dagger know a few things.

Again, this is very similar to the code we saw in Part 1 for generating subcomponent definitions for activities.

Now that we have this module, we need to install it somewhere.

And, as you may recall, ScreenBindingModule itself is installed in our root, @Singleton-scoped component.

Step 3: Have Something Worth Injecting

We're injecting a view model factory, but it could be anything. It turns out we also want to inject this into our fragment instance, which is the entire motivation for HasSupportFragmentInjector. Let's take a look at our sample fragment class:

That's actually it. You now know how to inject a Fragment in Android, and this will serve for 90-95% of cases. There are a few lingering questions, though....

Why Inject a View Model Factory into a Fragment?

After all, wouldn't the following work?

I mean, it sure seems to work. I get my ViewModel as expected, the app doesn't crash.... 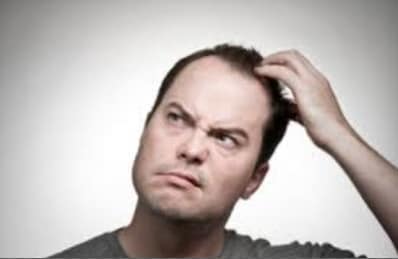 Hint: remember what I said earlier about the framework calling our fragment's default constructor? One time it does that is during back navigation. If we navigate back to this fragment sometime later, our app will crash. This is because the Android framework actually instantiates and attaches the fragment before finishing the onCreate of our activity! The above code works the first time because the view model has already been created and is keyed to the activity — meaning we're just getting an existing view model from a Map<Activity, ViewModel>. However, during back navigation, when the fragment is created first, that map.get(activity) call returns null and we're out of luck. Therefore, we need the view model factory for the back-navigation case when we do need to create a new view model.

Injecting a Retained Fragment, or, Never Inject Something Twice

First we should get this out of the way: you should probably avoid using retained fragments. While they may seem to solve an important problem (retaining state across rotations), they do so at the cost of your sanity.

Now that that's out of the way, let's just assume we already have a retained fragment, and we're not going to refactor it away anytime soon -- so how do we inject it, and why is it any different than injecting a normal fragment?

Now an interesting thing will happen. Let's assume that the whole reason we want a retained fragment is so that thing will be immune to device rotation. Our host activity can get destroyed and recreated all it likes, but our retained fragment will only get created once.

This is really a bit of "syntactic sugar" (in the dagger sense, so it makes you bleed), and it replaces something like the following: 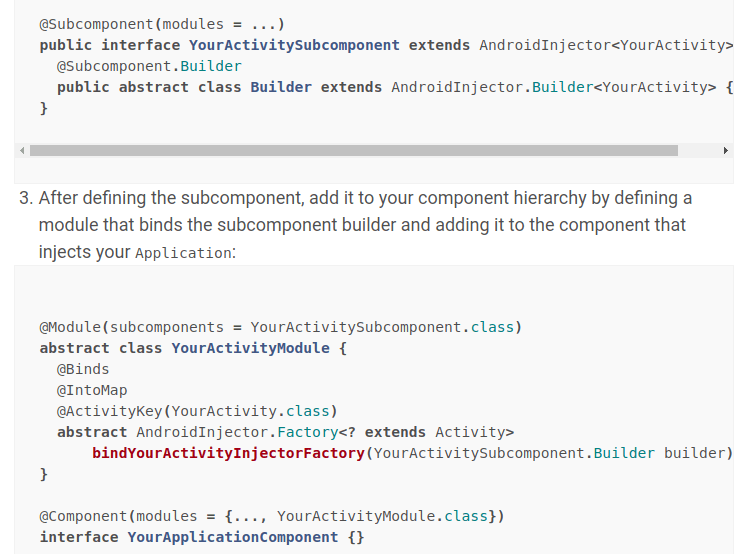 You can see why the annotation is preferable. But the point is that what you're doing is defining a Subcomponent.Builder, not the Subcomponent itself! Boiling it all down to its essence, you're creating a Map<HasSupportFragmentInjector, Subcomponent.Builder>. So, whenever you call Android[Support]Injection.inject(this), the Android[Support]Injection class grabs the subcomponent builder from the map, creates a new subcomponent, and then uses that subcomponent to inject your object. And this is why thing is new each time you inject your retained fragment. The dagger framework is not retaining a reference to your subcomponent, even though you scoped it, so it has nowhere to store those references.

There are actually a lot of ways to avoid this problem. The hard part, for me anyway, was understanding why it was a problem in the first place. Let me share my solution.

A little inelegant, perhaps, but effective! Since Kotlin 1.2, it is now possible to check if a lateinit var has been initialized, so I use that feature to decide whether or not to inject my fragment. I might also have declared my property @Inject var thing: Thing? and used a null-check, but then I would have to use the safe access operator (?.) everywhere. Another possibility would be to inject in onCreate instead, since I know that only ever gets called once for a retained fragment. I didn't like that approach because it was directly contrary to the advice in the dagger.android documentation, and my own personal experience dealing with fragments and their frankly bizarre lifecycles.

How to Add Navigation Drawer in Jetpack Compose?

Localization Made Easy: Generate 100+ Languages with Single Click in Flutter