If you are already aware of what virtualenv, virtualenvwrapper and pip is in the python ecosystem and have also heard or used pipenv and are just grepping for the commands to use to quickly set up and run an environment, then just refer to below:

If you thinking something along the lines of

I am aware of how to use requirements.txt file in python and have used virtualenvs previously, it works fine for my needs, frankly what is this pipenv module and why should I care?

First, A bit of context

In python, the packaging story has had lots of options. Just take a look here if you want to understand what all options are available.

A tried and tested approach to quickly create a reproducible env for you app has been to use virtualenv ** module and install all the modules required using *pip * and then capture them with pinned dependencies versions using **requirements.txt

Below is a sample requirements.txt file with pinned dependencies

Why do we need virtualenvs? Can’t I just install the modules on my base python installation?

This is a beginner question which every person new to Python and its ecosystem asks.

Well, The short answer is you can absolutely do that. However it’s not the recommended option.

Why? You might ask, Let me give you an example.

Let’s say I use Python 3.8 for my personal projects and want to use requests module version of 1.2.0.

But at work, we as a team have still have not shifted to the latest version and are using *Python 3.5 * with another version of requests = 1.0.2 (example)

Supporting this workflow is possible by creating two different virtualenvs with different python versions and I can quickly activate the required environment for use. It’s also quite trivial to destroy this environment and rebuild it again in case the environment is polluted or some dependency is breaking your app.

Pro Tip: Please DO NOT install modules in your base python version (installed/pre-installed via the OS). You might accidentally update the version of a dependency which might break something in your system/project. Always use virtualenvs.

Also, There are already abstractions built over*virtualenv **such as **virtualenvwrapper * and *tox * that make it a bit more convenient to use the *venv * (module for virtualenv). Diving into how they work is probably a story for another time.

Pipenv is the new solution to this packaging story and it wraps over pip, virtualenv and provides a lot of virtualenvwrapper like capabilities while makes it super convenient to set up dependencies for your project.

It is written by Kenneth Reitz of requests module fame and is actively maintained by the python community. This tool has very quickly risen to become the recommended tool for Application dependency management by python. This is higher level tool than pip and can make it very easy for multiple contributors to work/manage dependencies in a large project

Let’s see how to install, setup and create a virtualenv for a project all via pipenv. We would use terminal commands and see how to work with pipenv. However if you are using an editor like Pycharm, we will also see how to set it up there.

To install pipenv, you can use homebrew on mac/linux

Or, Alternatively, You can also use pip directly with a user installation to install pipenv

If you work with multiple python projects on your machine, it is a good practice to store the virtualenvs in a central directory which you can easily refer to later on.

To enable that, we need to add an environment variable WORKON_HOME in a shell configuration file of your choice (.zshrc, or .bash_profile)

In the absence of WORKON_HOME variable being set, pipenv would simply create the virtualenv in the current terminal dir

Create a project and virtualenv

Go to the project for which you want to create a virtualenv for, and then execute below command

Executing the above command would give an output like below, notice it creates a virtualenv in WORKON_HOME directory with the name of the project followed by a string. (test_project-UdkZ3s0t)

To open a shell with the already created virtualenv

To install any module in this newly created environment, type the module name from PyPi.

Below, we are installing requests module

The above command outputs below.

Couple of things to note:

Pipenv creates a Pipfile to keep all the required information about your dependencies. Let’s inspect it’s contents

Pipfile mentions the version of python required by this project under [requires] and has also specified requests = "*" under [packages], notice, the * wildcard means we don’t care about a specific version of requests as long as the latest version is installed.

This is different from pinning the dependency to a specific version like: requests = 2.24.0 and offers more flexibility since pipenv would figure out the dependency graph and ensure that all the required dependencies of requests module are automatically updated.

For the people from the JVM world, a parallel can be drawn to build.gradle or pom.xml files wherein we specify which repository to pick the library from, the packages to import and the language version to use

In addition to Pipfile, pipenv creates a Pipfile.lock as well which has finer level details about the specific version of packages that are installed in the virtualenv.

Notice, any changes made manually to this can be overwritten if you update pipfile (with some new package) and then run pipenv update

If you check the content of Pipfile.lock, you can notice that it maintains the version of the module and its direct , transitive dependencies , This ensures pipenv is able to reproduce the exact runtime environment every time

If you use requirements.txt file extensively with your project. You can easily generate a file using pipenv.

Also, if your project already has a requirements.txt file then while doing pipenv install, pipenv would automatically pick it up and install the required packages.

Tearing down a virtualenv

Removing a virtualenv is as simple as executing pipenv --rm

Pycharm provides a convenient way to use/and create a pipenv 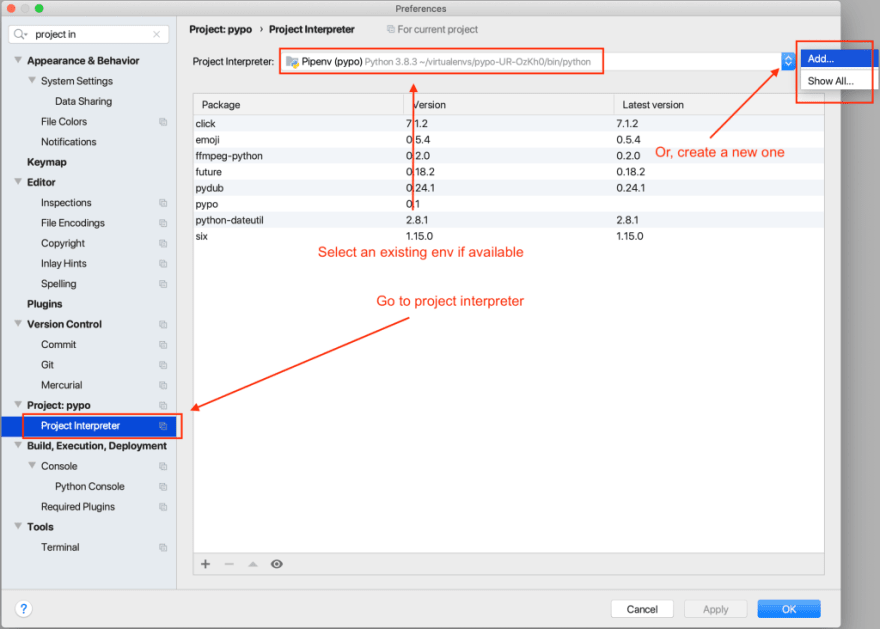 If you want to create a fresh env then click on Pipenv environment and select the base interpreter as the desired version to use. 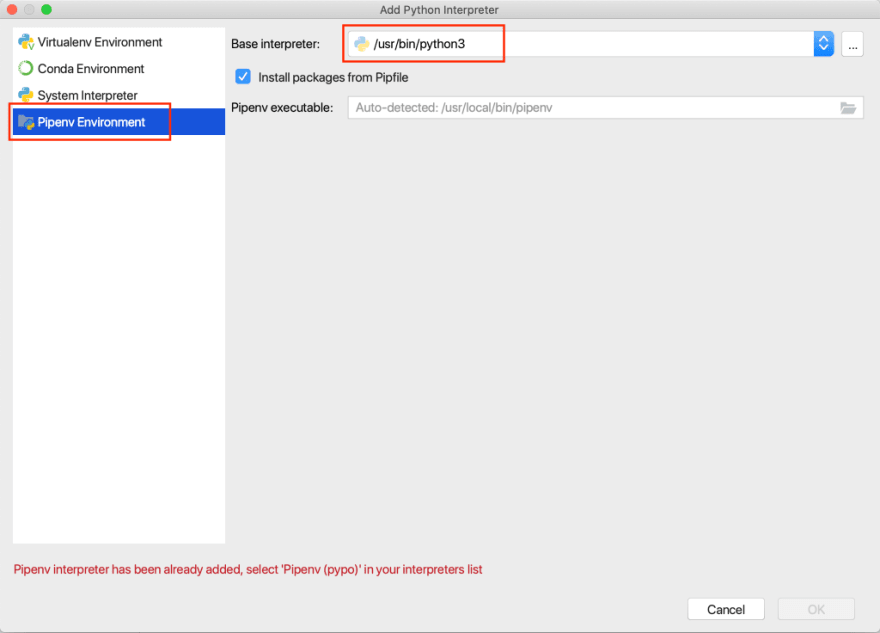 Alternatively, If you have already created a pipenv via command line, then you can select it by clicking on Virtualenv environment and under Existing environment , navigating till the path where your virtualenv resides and select /bin/python 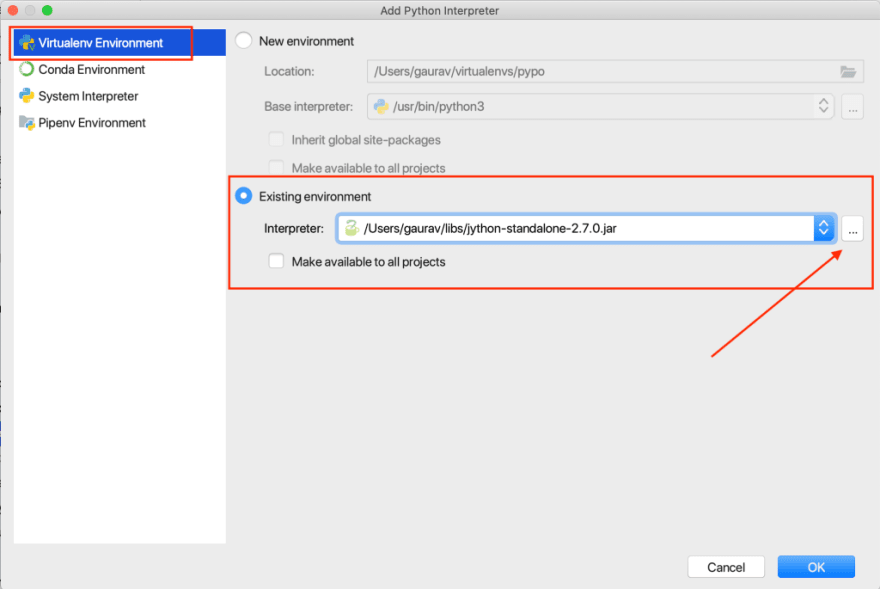 Pipenv is a really powerful tool that makes working with virtualenvs and dependencies a breeze. If you have not yet tried it out, I would highly recommend you to check it out.

If you found this post useful, Do share it with a friend or colleague. Until next time. Happy coding.