A bastion host is a server whose purpose is to provide access to a private network from an external network, such as the Internet. Because of its exposure to potential attack, a bastion host must minimize the chances of penetration.

What is the difference between a firewall and a bastion host?

A bastion host is a dedicated server that lets authorized users access a private network from an external network such as the internet. Placed outside the firewall or within a DMZ, the bastion host becomes the only ingress path to those internal resources.

If we want to SSH into a VM on the private subnet from our home/office (or using a development machine), currently we can’t. Our instance has no public IP, it is in a Private Subnet (no direct route from the internet). This is where we can use a Bastion Server or Jump server.

Exposing RDP/SSH ports over the Internet isn't desired and is seen as a significant threat surface. This is often due to protocol vulnerabilities. To contain this threat surface, you can deploy bastion hosts (also known as jump-servers) at the public side of your perimeter network.

Bastion host servers are designed and configured to withstand attacks. Bastion servers also provide RDP and SSH connectivity to the workloads sitting behind the bastion.

A network security group, or NSG, allows or denies inbound network traffic to your Azure resources. Think of a NSG as a cloud-level firewall for your network. 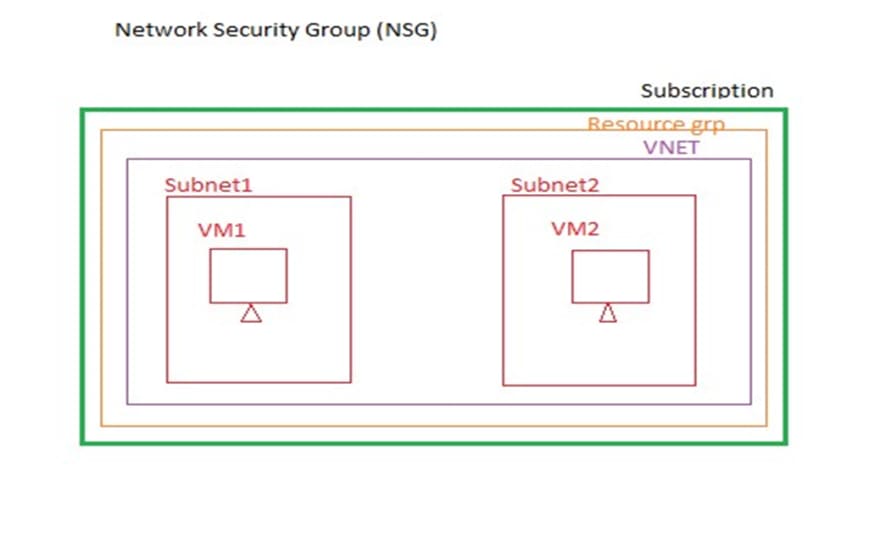 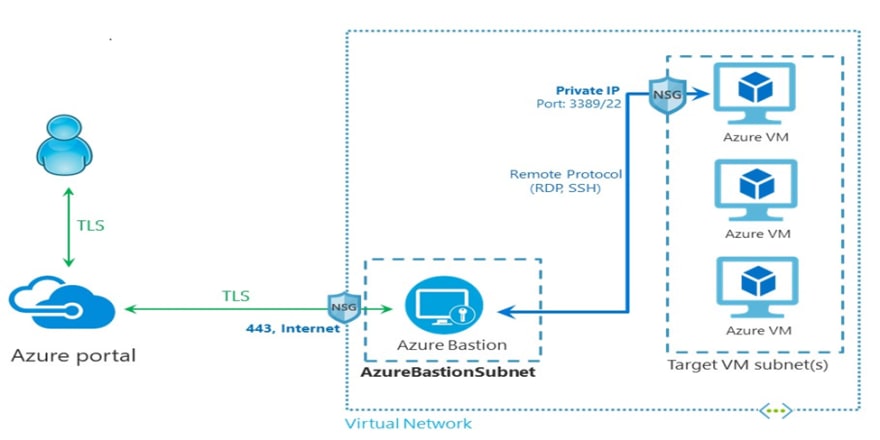 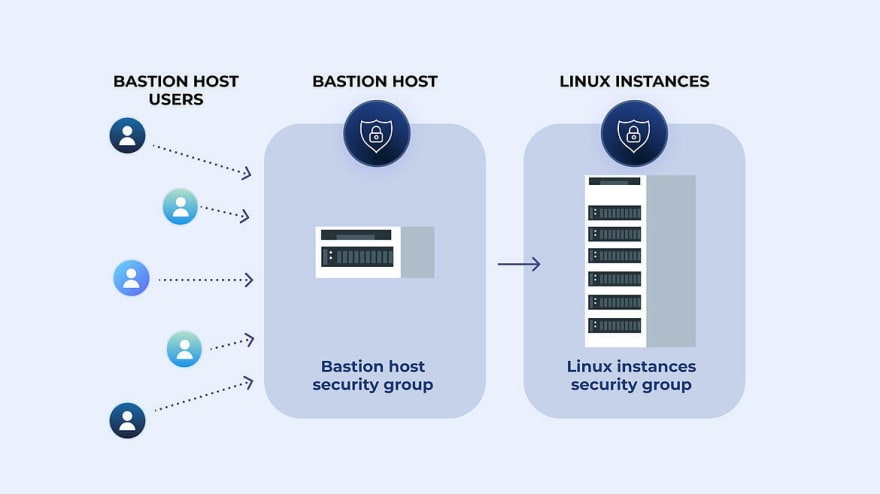 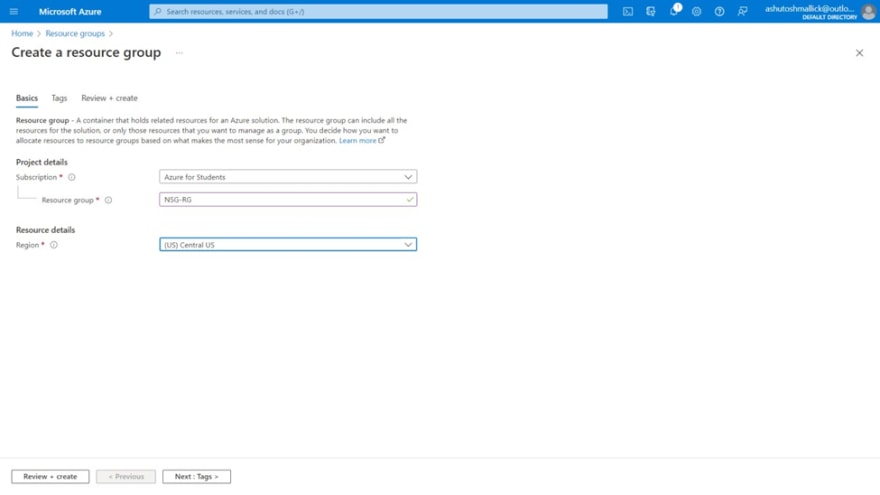 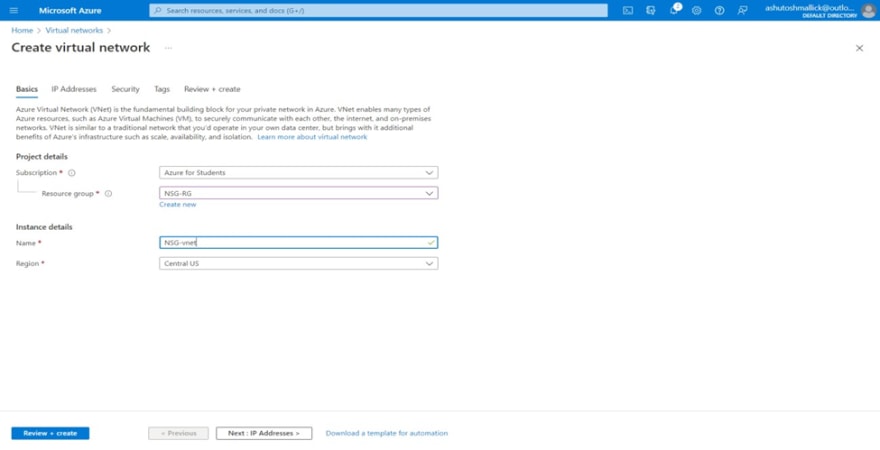 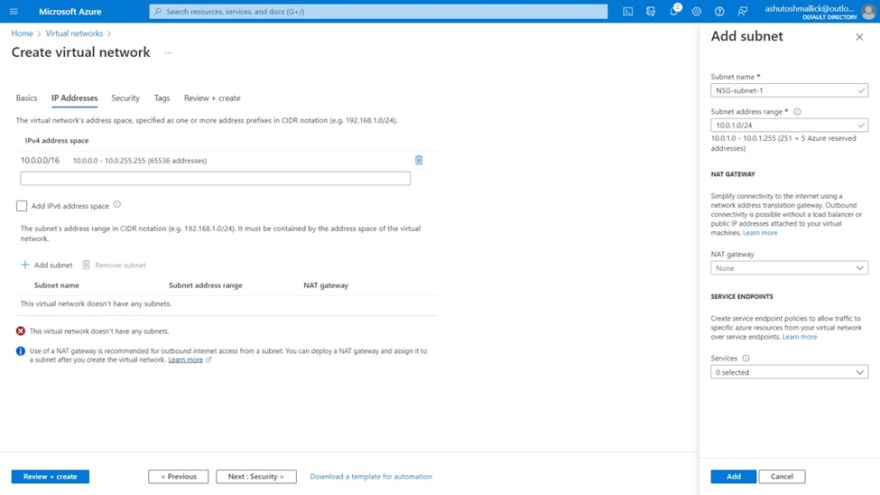 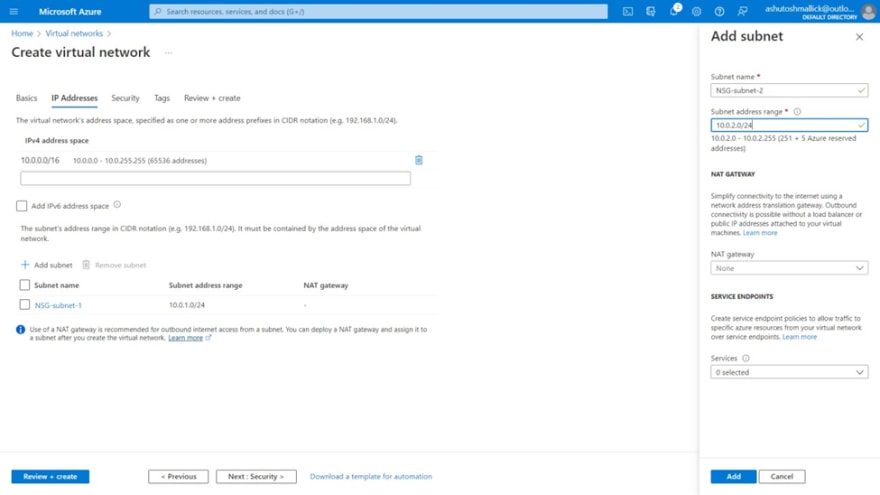 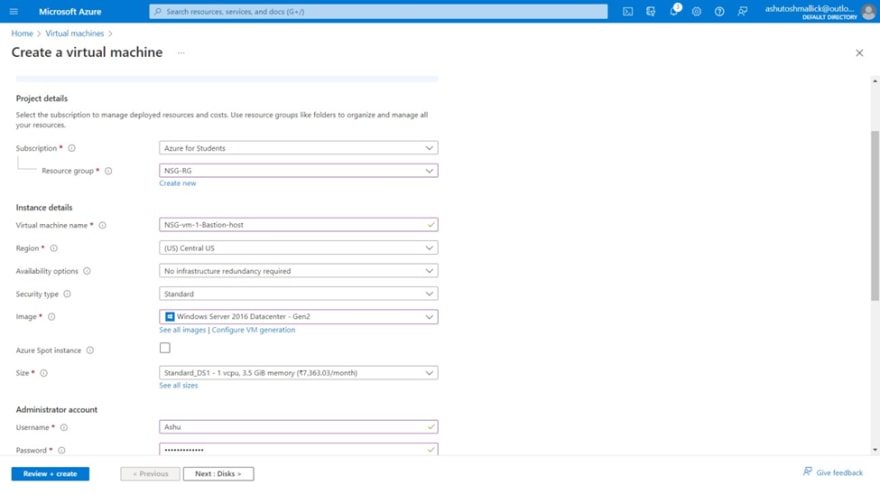 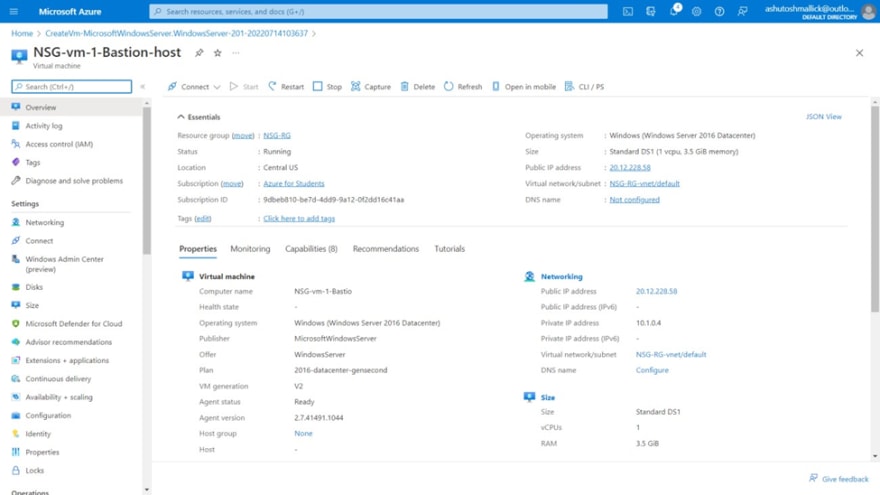 In this case NSG is applied to server by default. We can also attach NSG at subnet level. There are two rules i.e, Inbound rules and outbound rules in NSG. 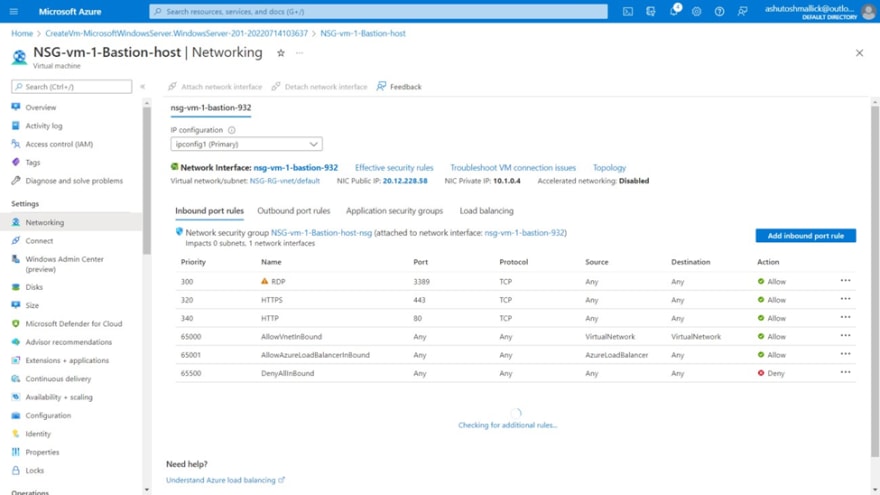 Create another VM (Web-server) inside Subnet-1. We can assign public Ip to the server. 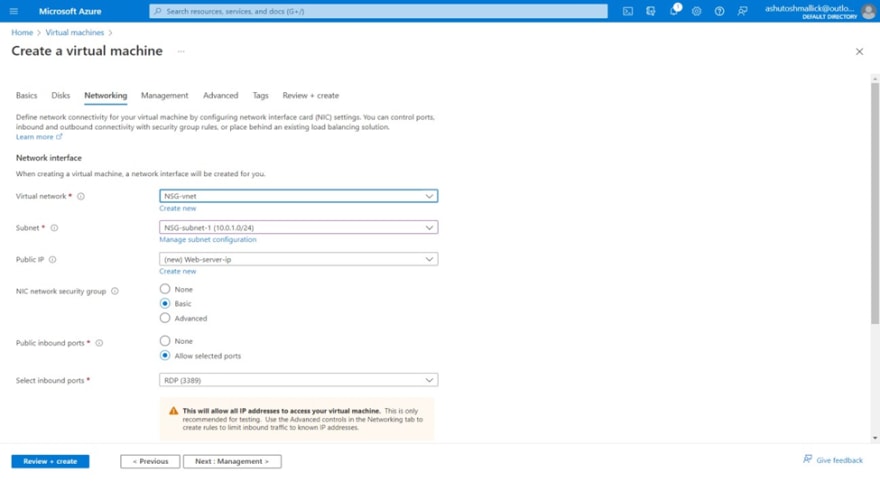 Create DB-server inside Subnet-2. Assign private ip to it. 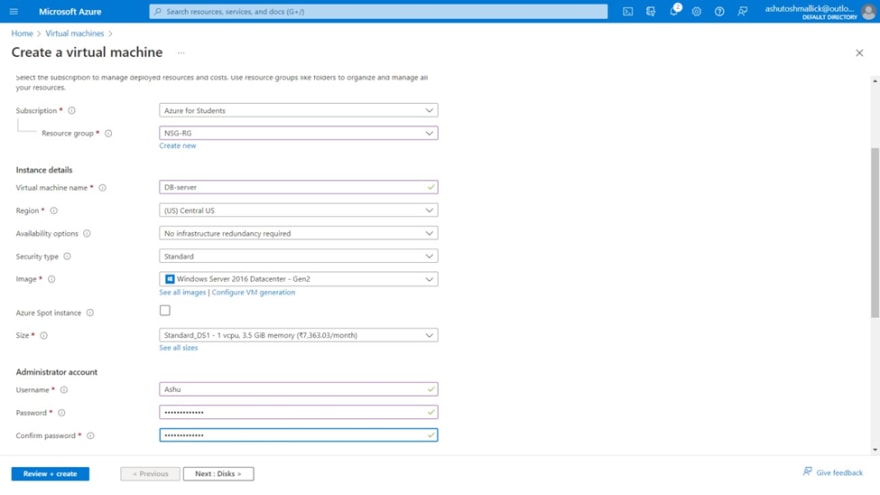 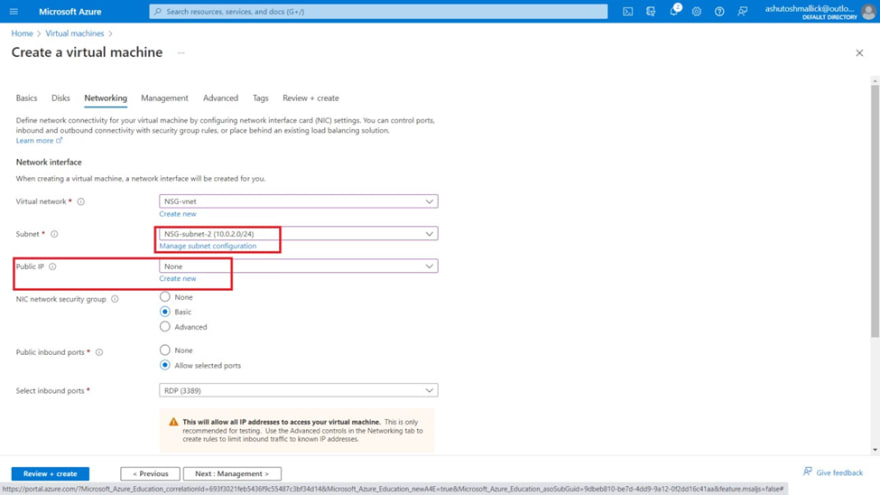 Inside inbound port there is a RDP port of source any and destination any , this means anyone can RDP into my server. 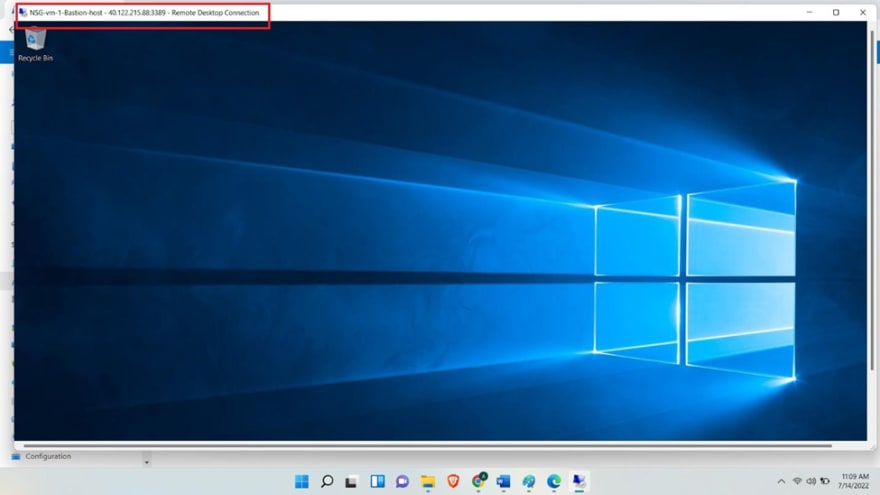 Now let’s create an inbound rule so that it can only allow my local desktop IP , to do that we have to put our ipv4 ip inside source IP addresses. Delete the previous inbound port security rule. 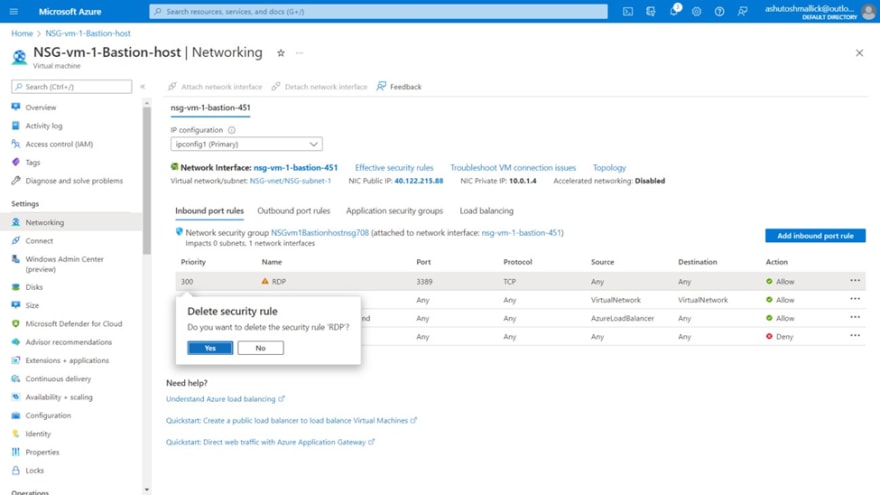 Add a new inbound port rule with source as your local PC ip address. Select service as RDP and protocol as TCP. 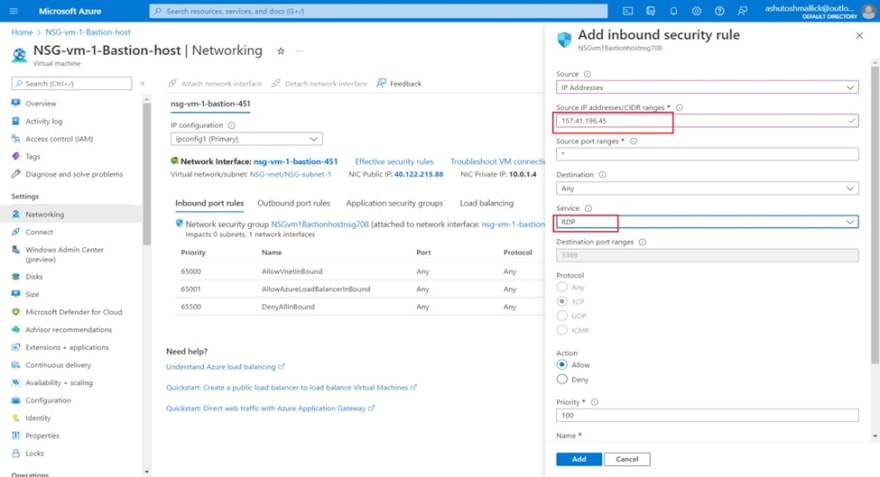 After editing this inbound port rule, NSG will only allow my local server IP to access the Bastion-host server via RDP. We can’t access the bastion-host from any other PC.

If we want to allow multiple PC to be able to access the bastion host, we can edit the inbound port rule and in place of source we can put the respective IP address of the PCs.

Suppose we don’t want a particular IP to access my Virtual machine, then create an inbound port and put that IP inside the source IP addresses and inside the destination IP addresses put this VM IP and select deny option in action.

We cannot directly RDP into our DB-server because it has only private IP, so in order to RDP we need a server that has a public ip and should present in the same network. 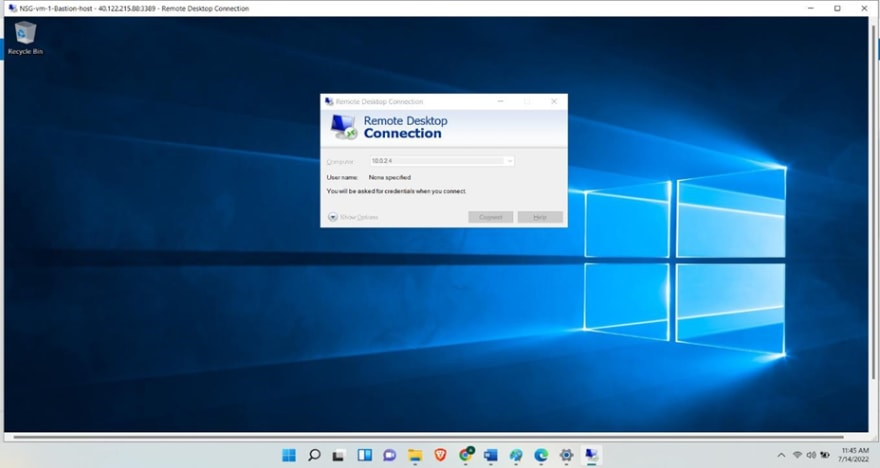 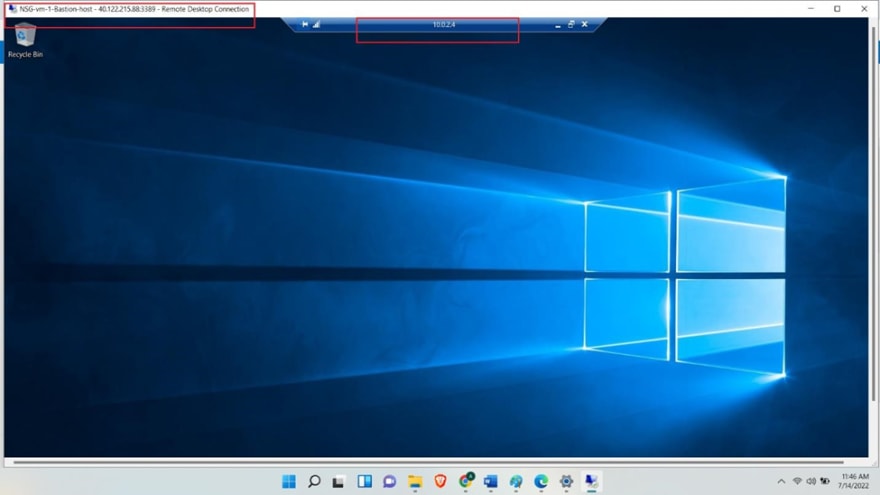 Similarly, connection to DB-server can be established by WEB-server as they exist in the same network. 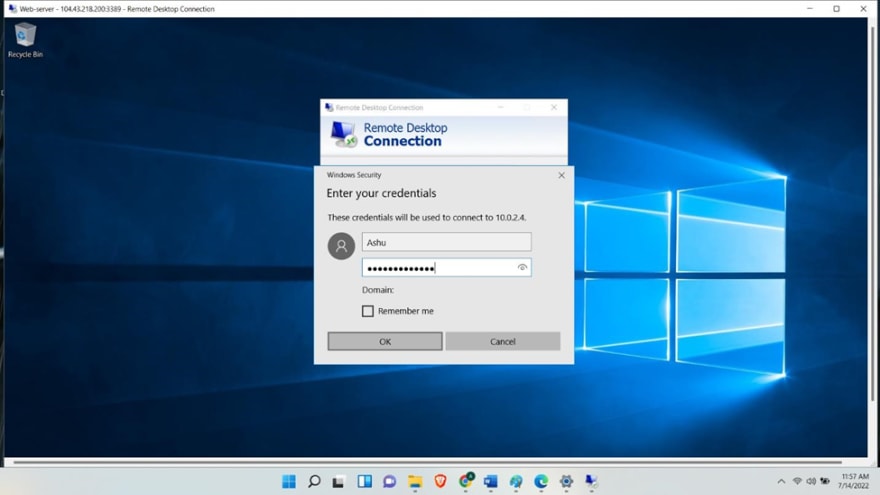 Connection established with DB-server from Web-server via RDP. 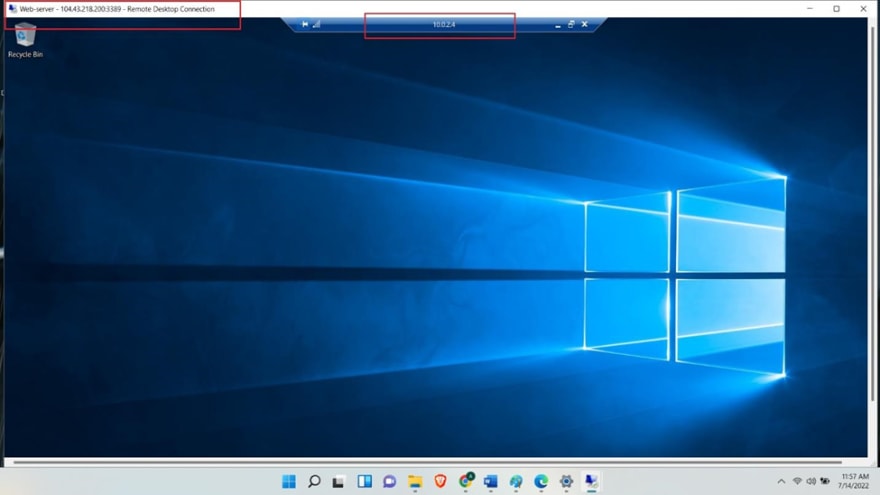 But our Connection to DB-server should only be restricted to Jump-server only. To solve this, we need to change inbound rule configurations of NSG of DB-server. 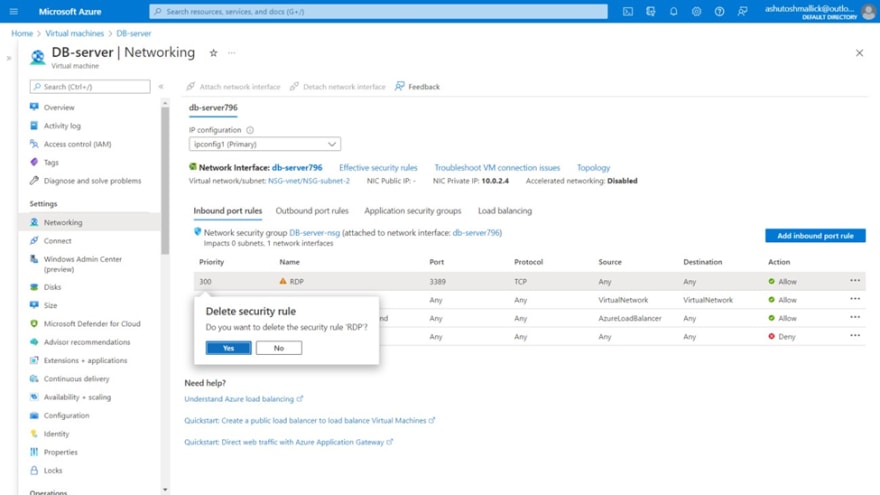 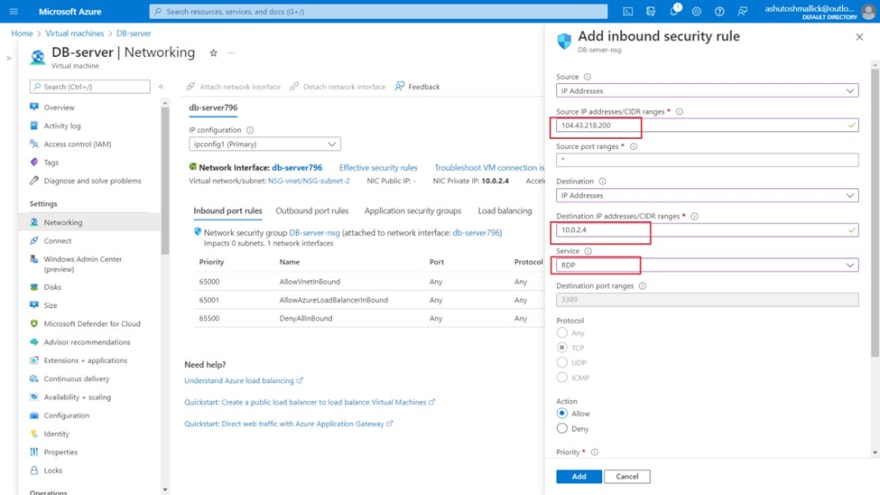 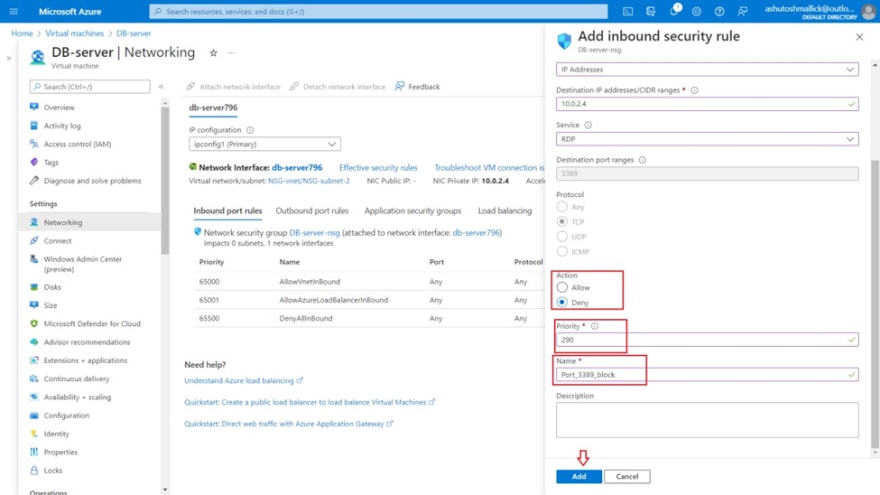 Now let’s try connecting DB-server again from inside WEB-server via RDP. We can see that the connection can’t be established. 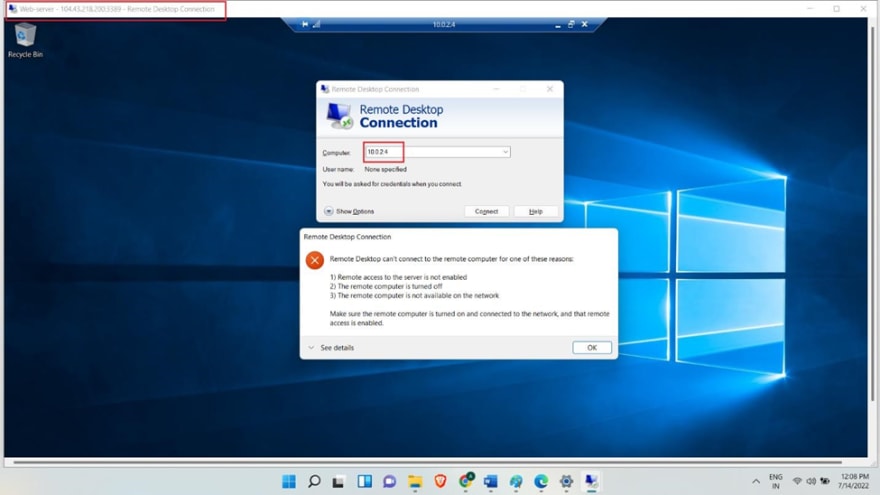 If we try connecting internet from DB-server from via Jump server we can see that DB-server has internet access. 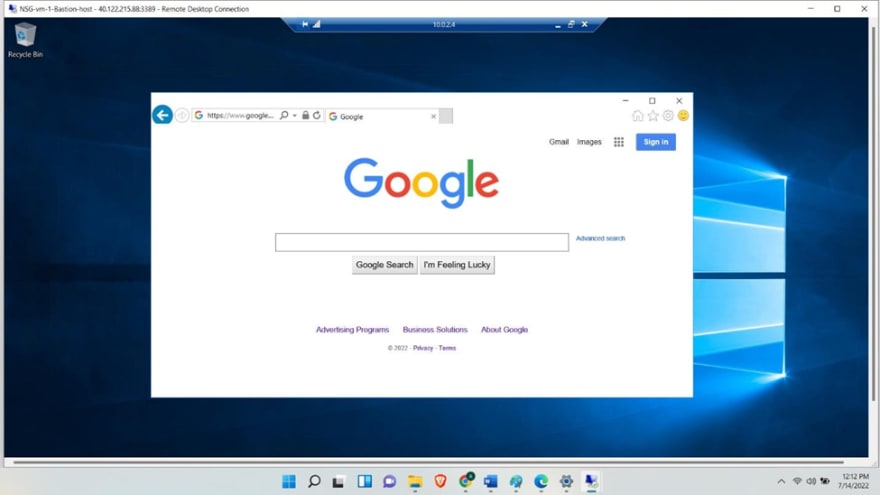 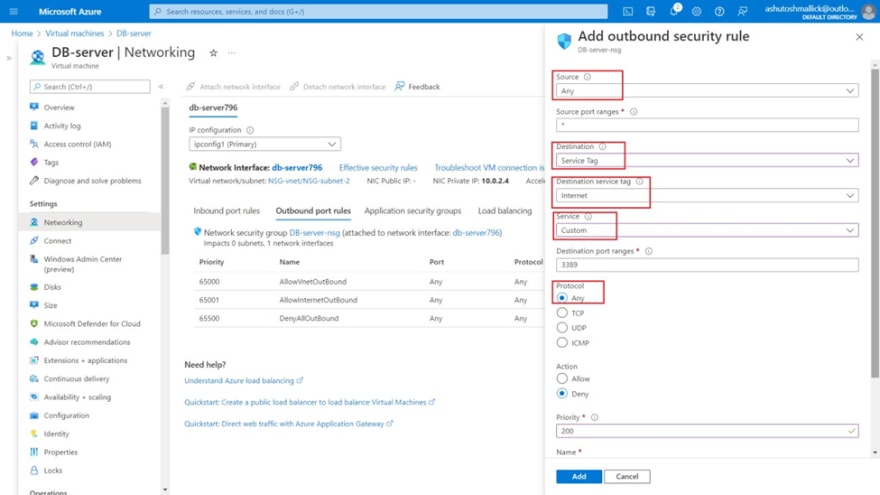 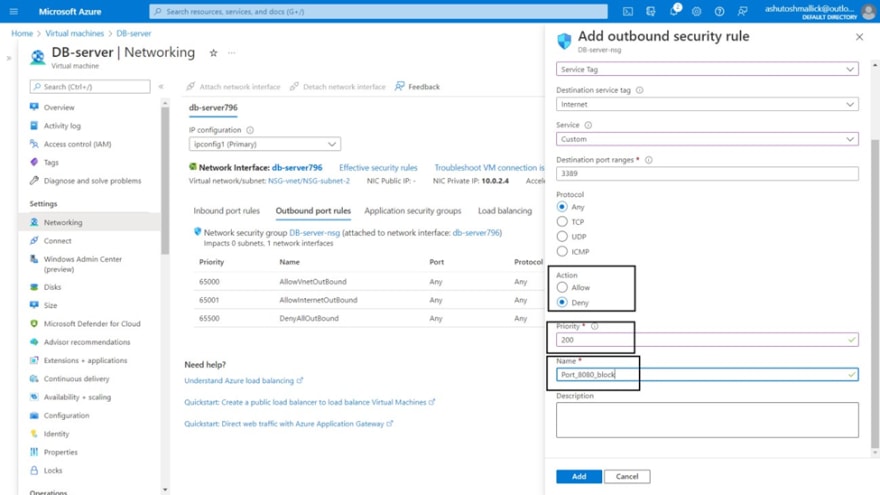 Now our deployment and setup for connecting a database server via bastion host is successfully established.

Drop your views regarding this.
Thank you!!

Serverless GraphQL on any Cloud

Once suspended, atm_06 will not be able to comment or publish posts until their suspension is removed.

Once unsuspended, atm_06 will be able to comment and publish posts again.

Once unpublished, all posts by atm_06 will become hidden and only accessible to themselves.

If atm_06 is not suspended, they can still re-publish their posts from their dashboard.

Once unpublished, this post will become invisible to the public and only accessible to Ashutosh Mallick.

Thanks for keeping DEV Community 👩‍💻👨‍💻 safe. Here is what you can do to flag atm_06:

Unflagging atm_06 will restore default visibility to their posts.