Laura is a seasoned program manager who knows her way around a retrospective. So when her favorite technique lost its shine, she recognized the signs immediately. “The team was bringing up fewer topics, and we stopped having meaty discussions. Even attendance started to fall off.”

When your “tried and true” retrospective format inevitably goes stale, you need a go-to bag of tricks to freshen things up and keep your team engaged. With the help of teammates past and present, I’ve rounded up several fun variations to mix in.

Find the biggest whiteboard you can and draw a horizontal line across the whole thing. This is your timeline. Ask team members to come up and mark releases, big wins, big fails, changes to team membership… anything that was significant for your team. Spend 10-15 minutes on this at the beginning of your retro to refresh your memories and set the stage for the rest of the session.

If your team gets a little twitchy at the thought of talking about how they feel, ease them into it by focusing on what they’ll do. This variation has “action-oriented” built into its DNA, so it’s often a hit with folks who are highly pragmatic. If you use this format for the entire retrospective, spend 10 minutes each on start, stop, and continue. For longer retro sessions, you can also use it “lightning round-style” at the end as you’re identifying action items and owners.

What did you like about the past year? What did you loathe? What did you lack (or long for)? And most importantly, what did you learn? Allow 10 minutes for each question. As a bonus, the “4Ls” technique is great for personal retrospectives as well. Dom Price, our resident work futurist, steps through the 4Ls roughly once a quarter. “Holding myself accountable to taking action and actually making changes is the key,” he says. “I don’t allow myself to add a ‘longed for’ until I’ve removed a ‘loathed’.”

It’s much easier to talk about project mechanics, rather than relationships and communication. But many issues that have nothing to do with tasks, and everything to do with human interactions. In such cases, the real_ conversation to be had is not in project language but in _people language. 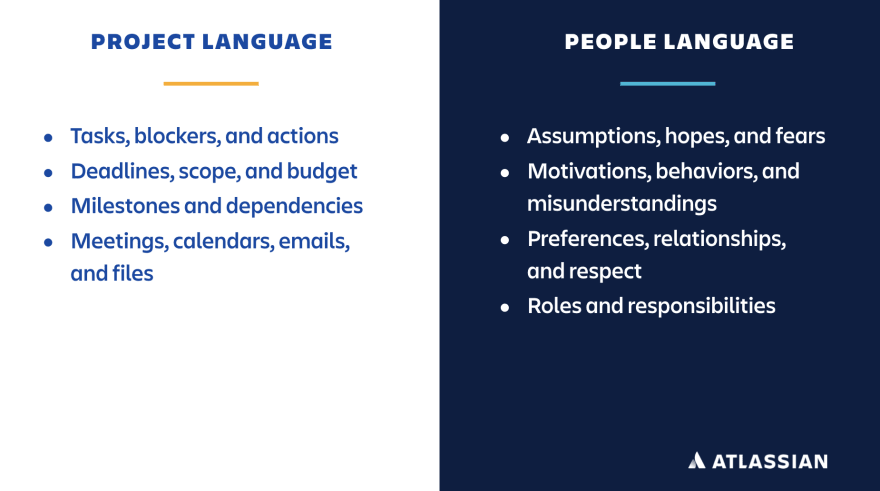 Reserve a portion of your retrospective to discuss the interpersonal stuff. What are people’s assumptions and expectations? Where are the misunderstandings? How do people feel about their work? Why are the same improvement actions coming up again and again?

When you identify a painful moment you’d like to avoid in the future, ask why the failure happened. Then, when you’ve agreed on the reason, ask why that was the case. And so on. After asking “why?” a few times, the root cause and long-term solution will be pretty clear. Allow 5-10 minutes for each pain point you plan to explore.

If loads of ideas for improvements emerge, vote on which action items you’ll prioritize in the immediate term. Start by listing them on the whiteboard. Then, have everyone grab a marker and place dots on the three ideas they’d like to see at the top of the list. Discuss the results with your team, prompting them with questions like “Why is that idea more valuable than the others?” and “What would happen if we didn’t do that?” Finally, select owners and due dates for the top-voted items.

If time allows (and team members are willing), have each participant share what strikes them as the most important thing the team discussed during the retrospective, and why it stands out to them. This helps ensure all team members contribute evenly and promotes deeper discussion.

Invite everyone in the group to wear a ridiculous hat to the retro. This helps encourage– _just kidding! _There’s no serious reason to do this. But don’t let that stop you if silly hats are your thing. Besides: the team that plays together stays together.

When you’re busy getting $#!τ done, it’s easy to let good deeds go un-noticed and un-thanked. Leave 5 minutes at the end for peer-to-peer kudos – even for little things like giving helpful feedback or being a sounding board. By this point in the retro, you’ve probably had some intense (perhaps uncomfortable) discussions, so use this technique to close the session on a high note.

To be fair, mixing in novel activities might be a band-aid solution if there are deeper issues troubling your team. “I’ve seen team engagement drop a number of times and for a number of reasons, but they all tie back to the team no longer believing retrospectives are useful”, says Penny, another seasoned Atlassian program manager. She points out a handful of reasons this might be.

The worst case scenario is the team feels like discussions in their retros are being used against them. That’s bad news, but you can help create a safe space by not mentioning who-said-what in your meeting notes. In extreme cases, you might choose not to take notes at all, or ask that the manager or stakeholders stay away for a session or two.

Or, if the action items coming out of retrospectives aren’t making an impact, the team may be disheartened. Are they being too ambitious or trying too many changes that could be working against one another? You might have more success by making small changes and treating them as experiments. If the team is frustrated by how slow things are progress, help them manage their expectations and build a sense of momentum by celebrating the small wins.

Teams in “crunch mode” may resist retrospectives because they feel they’re too busy right now. A team that already has a solid retrospective game would probably do the retro anyway and use it as a chance to figure out how to alleviate the pressure now and avoid it in the future. That said, sometimes we need to work with stakeholders and management as well to make sure we’re fostering an environment where teams are empowered to make improvements, even deadlines are looming.

Continuous improvement for the win

Keep in mind, there are other ways to change up your retrospective game. Hold it outdoors once in a while, or in a different room. Include people from adjacent teams if they were deeply involved in the work you’ll be reflecting on.

For Laura and her team, changing the cadence made a difference. “We spaced them out a bit more, and now the team walks in with more to talk about and more appetite for solving problems.” That same spirit of continuous improvement is important for facilitators, too. Keep experimenting, keep improving, and keep winning.

The post Revitalize your retrospectives with these fresh techniques appeared first on Atlassian Blog.

We did it! Top 5 Reflections - Machine Learning Final Project @ Makers

Want to run a kata at your company? I did it. Here are some tips.