I would like you to tell about why Python programming language is becoming more popular nowadays. Python language is invented by Guido van Rossum in 1991. Its main target was code readability. From 2003 Python programming language entered the most popular programming languages and this popularity increasing linearly. You willl see popularity of a programming language index graph between 2003–2013. This graph is created by Google Trends data which is based on how often language tutorials are searched on Google. Guido van Russom worked at Google between 2005–2012. After Google he started to work in Dropbox now he is working at Dropbox. While he was working at Google, Google became more interested in Python language and started to use in some projects and became an official language. Some of projects listed on https://quintagroup.com/cms/python/google. Google also has free Python class in https://developers.google.com/edu/python. 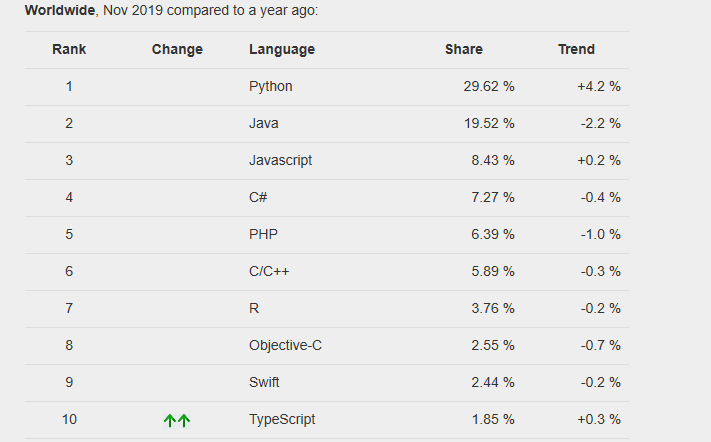 And now in 2019 Popularity of Programming Language chart is below. Python is the first by share nearly %30 and gained +4.2 popularity from previous year.

In this site (http://pypl.github.io/PYPL.html) it is shown that Python passed Java and grew by %19 percentage.

Another indicator of popularity of a programming language TIOBE index results showed below. The TIOBE Programming Community index is an indicator of the popularity of programming languages. The index is updated once a month. The ratings are based on the number of skilled engineers world-wide, courses and third party vendors. Popular search engines such as Google, Bing, Yahoo!, Wikipedia, Amazon, YouTube and Baidu are used to calculate the ratings. It is important to note that the TIOBE index is not about the best programming language or the language in which most lines of code have been written. Python placed 3rd and gain 1 step from previous month.

Up to this point, I showed the increase of Python programming language let's start to identify why Python becoming more popular. Python is very easy to learn because its syntax very close to English language. Python is a dynamic language that has no strict rules. That's why it is very enjoyable for who is learning programming for the first time. Fun is a great motivator. There is a fun fact about Python that its name not coming from snake it is coming from an English comedy group Monty Python (http://www.montypython.com/pythons). According to research in 2014 July, Python is currently the most popular language for teaching introductory computer science courses at top-ranked U.S. departments. Specifically, eight of the top 10 CS departments (80%), and 27 of the top 39 (69%), teach Python in introductory CS0 or CS1 courses. Another reason is for becoming popular Python programming language is so versatile. Python is a general-purpose language, which means it can be used to build just about anything, which will be made easy with the right tools/libraries. Professionally, Python is great for backend web development, data analysis, artificial intelligence, and scientific computing. Python is second language after R in data mining. Python has 5th most crowded developer community, in GitHub 4th most used programming language. Python has 3rd most crowded group in In Meetup.com. Community is another key factor for interest growth.
Large organizations that make use of Python include Wikipedia, Google, Yahoo!, CERN, and some smaller entities like ILM, and ITA. The social news networking site Reddit is written entirely in Python.

Applications for Python
Python is used in many application domains. Here's a sampling.
The Python Package Index lists thousands of third party modules for Python.

Web and Internet Development
Python offers many choices for web development:
Frameworks such as Django and Pyramid.
Micro-frameworks such as Flask and Bottle.
Advanced content management systems such as Plone and django CMS.

And the Package Index has yet more libraries:
Requests, a powerful HTTP client library.
BeautifulSoup, an HTML parser that can handle all sorts of oddball HTML.
Feedparser for parsing RSS/Atom feeds.
Paramiko, implementing the SSH2 protocol.
Twisted Python, a framework for asynchronous network programming.

Scientific and Numeric:
Python is widely used in scientific and numeric computing:
SciPy is a collection of packages for mathematics, science, and engineering.
Pandas is a data analysis and modeling library.
IPython is a powerful interactive shell that features easy editing and recording of a work session, and supports visualizations and parallel computing.
The Software Carpentry Course teaches basic skills for scientific computing, running bootcamps and providing open-access teaching materials.

I am a backend developer more than 8 years of web development experience with .NET environment in Banking, Automative, Journalism sectors.