Javascript is a 'functional' language. What this means is that functions are first class objects in Javascript, and as such they can be passed on as parameters to other functions. There are quite a few built-in methods provided by the Javascript standard library, which makes use of this fact, to enable us to write, clean, understandable, and easy to read code.

One such built-in class which makes extensive use of Javascript's functional nature, is the Array class. Arrays in Javascript, expose a number of instance methods, which:

The most popular of these are of course forEach, filter, map and reduce. Since these methods also return the Array instance as the return value of the method, they are often chained together, like this:

In this example, we are calculating the total paid expenses, after converting them from USD to INR. To do this, we are:

Looks like a common, very typical, valid use-case for chaining array methods right? A lot of developers who've been taught to write functional Javascript would come out with something similar when asked to solve this issue.

The Problem with Array Method Chaining

Thanks to JSPerf, we can visualize this cost quite easily. So let's run a comparison test for the same code with tripExpenses having 10 elements, 10,000 elements, and 100,000 elements. Here's the result of the JSPerf comparison: 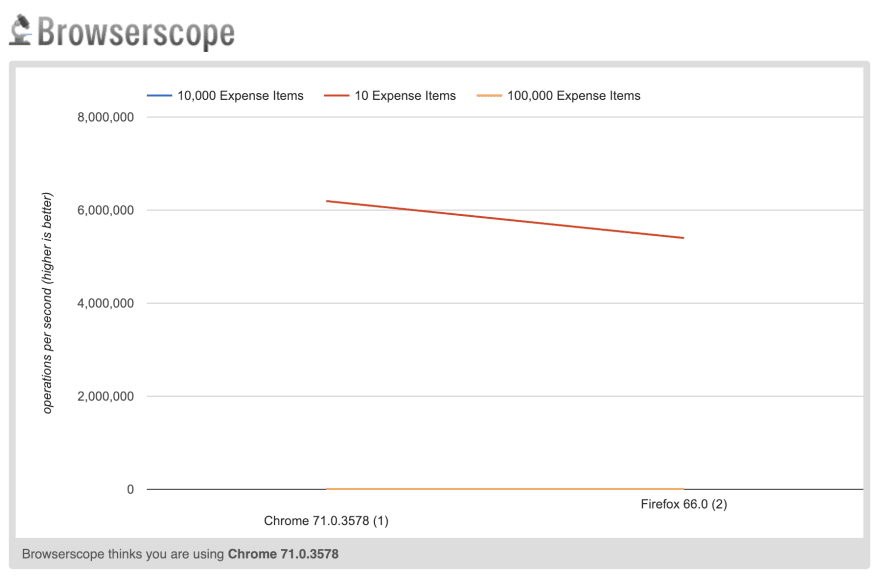 Yikes, thats really bad! And while processing an array of 100,000 elements might not happen often, 10,000 elements is a very plausible use case, that I've seen regularly in multiple applications I've developed (mostly on the server side).

This shows us, that when we write – even what seems to be quite simple code – we really should be watching out for any performance issues that might crop up because of the way we write our code. If instead of chaining the filter, map and reduce methods together, we rewrite our code such that, all the work gets done in a single loop, we can gain significantly better performance.

Let's run another JSPerf comparison to see how this performs against it's functional counterpart, in a 10,000 element test: 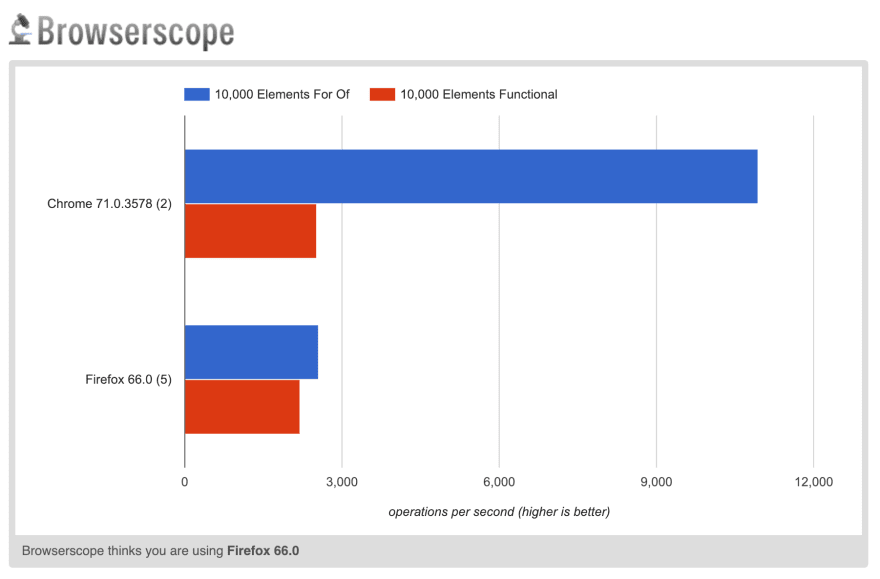 Why Such a Large Performance Delta?

So why is the functional example so much slower than the for-of example? Well it's a combination of factors, but the primary factors that as a developer, we can control, from user land are:

If you see the for-of example, you'll see that we only ever iterate through the tripExpenses array once, and we call no functions from within, instead performing our calculations inline.

One of the big performance 'wins' that modern Javascript engines get is by inlining function calls. What this means is that the engine will actually compile your code into a version where the compiler replaces the function call, with the function itself (i.e. inline where you call the function). This eliminates the overhead of calling the function, and provides huge performance gains.

However, we cannot always say for sure whether a Javascript engine will choose to inline a function or not, so doing it ourselves ensures that we have the best possible performance.

Some developers may consider the for-of example to be less readable, and more difficult to understand than the functional example. For this particular example, I'd say both the examples are equally readable. However, in the case of the functional example the convenience of the method chaining, tends to hide the multiple iterations and function calls from the developer, thus making it easy for an inexperienced developer to write non-performant code.

I'm not saying that you should always avoid the functional way, I'm sure there are plenty of valid cases for which using the functional way and for chaining the methods, but a general rule of thumb to remember when it comes to performance, and iterating arrays in Javascript, is that if you're chaining methods which iterate through the entire array, you should probably stop and consider the performance impact, before going ahead.

I'd love to hear your opinion on what I've written in this article. Do chime in with your comments below.

[Feb 6th, 2019] Some caveats, and things to keep in mind, as pointed out by commenters

As pointed out by Paul B, there are is a performance hit when using for…of in a transpiled form in browsers, but you can always use a normal for loop with an iterator variable to get around this. However, like Paul says, there are quite a few advantages to sticking with an iterator function. Do go read his comment, it's worthy of being an article all by itself.

In addition, a lot of folks have also been saying that this would be premature optimization or a micro optimization, and I do partially agree with them. You should in general always optimize for readability and maintainability over performance, right up until the point where poor performance actually starts impacting you. Once you've reached that point, then you might want to reconsider your iterators.

Originally published at asleepysamurai.com on January 8, 2019.