Adding SvelteKit tooling to your continuous integration (CI) process can help you work more efficiently as well as keep your code base more consistent. This is useful when you need to hand your project over to a client, or even get assistance from colleagues or external sources. We look at some tools you might consider adding to your CI process in this article. We cover checking your code follows best practices, that it has consistent styling as well as how you can create consistent commit messages. I hope you are able to apply at least a couple of the aspects covered to your regular SvelteKit development process.

Since 70% of professional developers use Visual Studio Code, let's take a quick look at some extensions you might want to add to your SvelteKit workflow before we get on to the main tooling items. Although the tools we look at later are mostly standalone tools, you will get additional benefits when working with VSCode if you add the corresponding extension. We will look at the dot files as we go along.

Everyone has their own favourite VSCode settings. Personally I prefer a light-touch approach, so hopefully this might be used as a starting point for anyone. You can set these globally, though typically I add a config file to each project (at .vscode/settings in the project folder) so I can tweak settings based on what the project uses.

formatOnSave is my most loved setting! I have mixed feelings about organizeImports and omit it on most projects — it can get a touch annoying when it removes imports which you still need. You can run organise imports manually using the Shift + Alt + O key combination. The markdown options make your content a little easier to read in the editor (you might prefer 100 or 120 character lines instead of 80). I have had a couple of Svelte projects where formatting stopped working and found adding the last setting fixes this. As I say this is just a base and you will probably have your own favourites. I'm keen to hear what I am missing (remember I prefer a minimalist approach though)!

pnpm is a packet management tool like npm or yarn. I like to look at it as a more modern imagination of a package manager. The main selling points are speed and efficiency. When you install packages in your project, yarn and npm will download the package and save it to a node_modules folder in your project. These folders can get huge and you have to scan though old projects deleting them whenever your machine starts running low on free disk space. In contrast pnpm creates a central repository for packages on your machine and just adds a link from the node_modules folder of your project to the particular package in the the central repo.

The two main advantages of the central local repo approach (which pnpm follows) are that it is quicker to start up new projects as many of the packages you need to install will already be on your machine. Then, on top, you save on disk space. In the screenshot below, you see in the last long line 142 packages were reused in this particular case. That's 142 packages that did not need to be freshly downloaded. You will also see the output is a little more terse and cleanly formatted than with other tools. 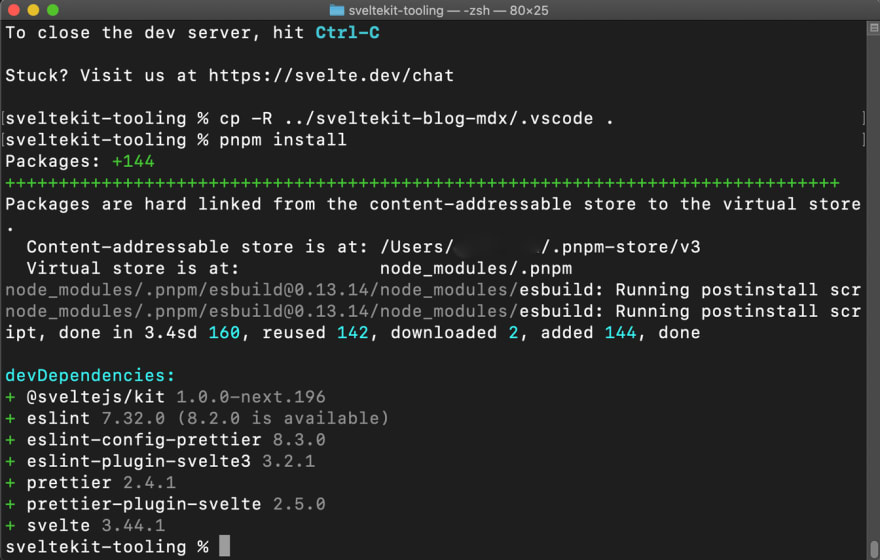 You need a one-off install to get pnpm running on your machine. After that, it accepts commands similar to the ones you will be using to with npm or yarn. If you already have npm on your machine just run this command to install pnpm globally:

To check for updates for pnpm and other global packages, run:

You can automatically add prettier to a new skeleton Svelte project form the init tool:

The default prettier script installed into package.json uses the .gitignore file to decide which files to ignore for formatting. I like to commit the pnpm-lock.yaml file but am not too bothered about how it is formatted so go update the script and add a .prettierignore file to my project root folder:

Notice I add a prettier:check script too! I use this for a final check before committing, even though I set formatOnSave in VSCode.

If you prefer tabs to spaces, ignore the rest of this paragraph! By the way I'm not saying spaces are better than tabs, just letting you know how to switch if you don't want to go with the default, just saying! Here's my .prettierrc file:

We use default filenames here for the the ignore and config file so we don't need to specify them explicitly in the scripts.

For completeness, here is a typical .gitignore file for one of my SvelteKit projects:

While we're slightly off topic and since this does not fit neatly anywhere else, it is worth adding a .nvmrc file to new SvelteKit projects. This sets the node version when your host builds the project. Not setting it can result it builds failing as some hosts use an older node version by default.

ESLint is a well-know JavaScript linting tool. There are various rules you can set though the defaults set by the Svelte init tool do work quite well. If you have set up your project using another method you can run the ESLint setup tool to get you going:

Here is the .eslint.cjs file that I go with (default for JavaScript skeleton project from init tool):

Here's the lint package.json script I typically use:

svelte-check is a handy tool for finding TypeScript errors in your code, though I also like to use it on JavaScript projects. You might find it spits out a lot of errors. If you are just starting out, you will not understand all of them or know which ones are safe to ignore. In this case, if your code works, just fix the accessibility errors and tackle the others one by one as you gain more experience.

Anyway to set it up run:

Then add a script to package.json to run it when you need to:

You can set a stricter --fail-on-hints flag as an alternative.

stylelint is great for checking accessibility issues in your CSS code. You can also use it to prevent colour drift and to keep your code more maintainable. As an example, setting a rule for no named colours will flag up an error if add something like border-color: red for debugging and forget to remove it. More likely though, you might set a hex or HSL value while fixing or setting something up instead of using a named variable like --theme-colour. When you later need to tweak the theme colour, the manually added hex value will persist creating inconsistencies in the site.

I add this script to package.json for vanilla CSS projects:

this is the SCSS alternative:

Following the type of commit in brackets we have a description for the part of the project affected. Then the commit message itself. The emoji is not required! If you want to try out conventional commits, you might like the commitizen command line tool. As well as holding your hand as you write commit messages, it can handle version bumping and generate changelogs for you. We won't go into details here, but definitely try it on a new side project to see if it suits you.

I like to include the commitlint tool in all my SvelteKit projects to enforce the conventional commit syntax. If you want to try it, install a couple of packages and then add the config file:

Next, create a commitlint.config.cjs file in your project's root folder:

Because SvelteKit uses ES modules by default, it is important that the file extension is .cjs rather than .js.

To test it out run a command form the terminal like: 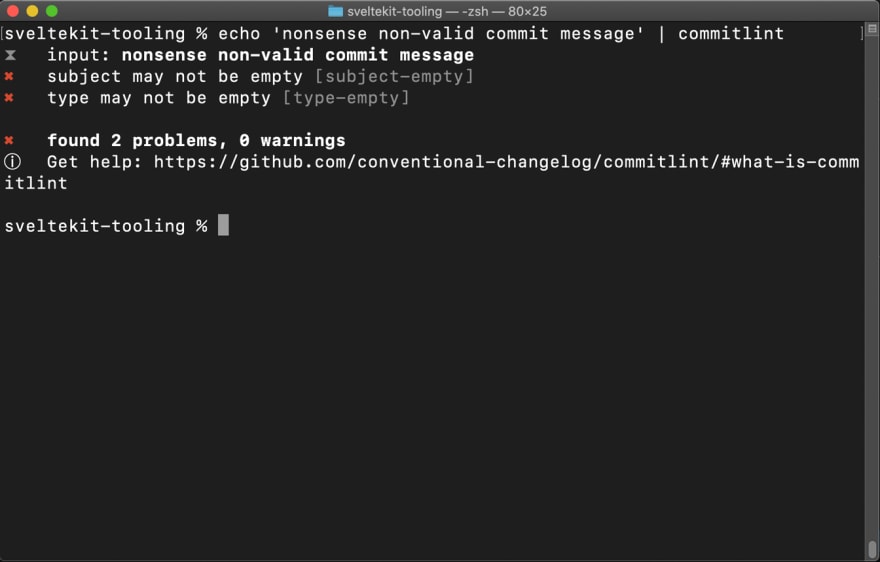 We will see how to integrate commitlint into the continuous integration process next.

Husky pulls together a few of the other tools we have already seen. Essentially it runs git hooks locally, before committing your code. If you have ever pushed code to an upstream repo only to realise you forgot to format it or didn't save a file with an error in it before committing Husky will get your back. So, as an example, you can make sure you pass svelte-check and a host of other things before pushing to your remote repo. Here's my setup but you can go to town and add a whole lot more.

To get going install Husky as a dev dependency:

Next you can add config files to run at different stages in the continuous integration process:

🙌🏽 SvelteKit Tooling: What we Learned

I do hope there is at least one thing in this article which you can use in your work or a side project. I'm keen to hear what tools you use in your own process and any further recommendations you might have. Drop a comment below with your thoughts.

You can see an example project with all of this set up on the Rodney Lab Git Hub repo.

Have you found the post useful? Would you prefer to see posts on another topic instead? Get in touch with ideas for new posts. Also if you like my writing style, get in touch if I can write some posts for your company site on a consultancy basis. Read on to find ways to get in touch, further below. If you want to support posts similar to this one and can spare a few dollars, euros or pounds, please consider supporting me through Buy me a Coffee.

Finally, feel free to share the post on your social media accounts for all your followers who will find it useful. As well as leaving a comment below, you can get in touch via @askRodney on Twitter and also askRodney on Telegram. Also, see further ways to get in touch with Rodney Lab. I post regularly on SvelteKit as well as other topics. Also subscribe to the newsletter to keep up-to-date with our latest projects.