Absolute paths are very useful. Instead of importing modules using relative paths, first descending to the root level and then going up again, when we use absolute paths we just need the "going up" part because we start from the root directory already.

One of the main advantages of absolute paths over relative ones is the independence of file location within the project; that is, you can move the file to a new location without having to edit its contents.

As an example, let's imagine that we have the following directory structure: 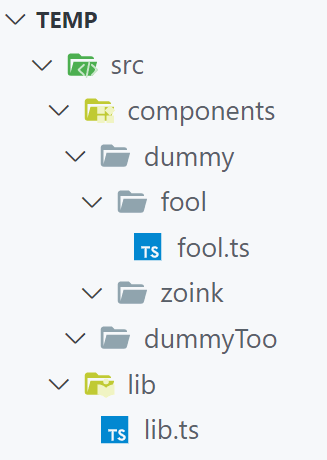 Using relative path, to import something from lib.ts into fool.ts I would have to write:

The "problem" here is that absolute paths do not work in TypeScript or Parcel by default.

To be able to use absolute paths in TypeScript we can set the baseUrl property in the tsconfig.json file. With this, we define src as our root directory (for module resolution).

According to TypeScript documentation(1):

Setting baseUrl informs the compiler where to find modules. All module imports with non-relative names are assumed to be relative to the baseUrl.

Although Parcel works very well with TypeScript, it does not use the baseUrl property of tsconfig.json to resolve module paths. For it to be able to find the files, there is a proper configuration - using aliases(2) - to be added to package.json

That's it! Now our code import { Example } from "lib/lib"; works as expected and modules paths are resolved accordingly. 🙂

What are services in Angular? And how in the world do I use them?

Understanding Buttons and Links from Zero

Arthur V. M. Dantas
@arthurvmdantas - Twitter/GitHub - Full-Stack Engineer (React/NodeJS)
CHALLENGE: Describe AI in five words or less.
#discuss #ai #watercooler
5 Life-Changing Lessons I Learned From Being Laid Off That Will Put You Ahead Of 97% Of People
#beginners #productivity #motivation #codenewbie
What was your win this week?
#discuss #weeklyretro

Once suspended, arthurvmdantas will not be able to comment or publish posts until their suspension is removed.

Once unsuspended, arthurvmdantas will be able to comment and publish posts again.

Once unpublished, all posts by arthurvmdantas will become hidden and only accessible to themselves.

If arthurvmdantas is not suspended, they can still re-publish their posts from their dashboard.

Once unpublished, this post will become invisible to the public and only accessible to Arthur V. M. Dantas.

Thanks for keeping DEV Community 👩‍💻👨‍💻 safe. Here is what you can do to flag arthurvmdantas:

Unflagging arthurvmdantas will restore default visibility to their posts.