this post will focus on no side effect environment module testing, and the code is not in any programming language :P

just to be simple we will use item as string "A", "B" and the checkout will just print format list of purchased items

now let's start writing a test on each function, start with the very easy first test on isEmpty()

this is so simple. let's see the next method addItem()

we already stuck at the name of test. this method just add the item to cart without returning any result
you can make a method return boolean to represent the success/fail result but it still not what we expect a method to do, to actually put item in the cart
instead of checking the result, we want to check the state of the cart for it's items but the items property is private
the quick easy way would be

we change the items to be exposed to public scope. now we can test

but this break a concept of encapsulation and make a test become a white box testing. we would prefer black box approach because we don't want the detail and logic of module to grow outside of itself and become hard to understand

let's just keep it like this and see the next test
the isEmpty() test we wrote is not covered all the cases it can be. also we want to test addItem() with multiple item.
we need to setup test with already added item. someone may come up with this solution

by setting items directly (or create public fn setItems to set it). you can isolate a test to just it's testing method.
also if some method require more pre-setup state, setting up state directly often be the quick way to do.

the problem is, this is not the actual usage of your module. by directly setting state, it can happen to be a "shouldn't exists state" which mean you are testing the thing that not actually exists in real code


also as mentioned before, the state shouldn't be exposed out of module. so this kind of setup is not a way we want to do.

taking a step back

if you just want code and howto, skip this part :P

for now we have 2 problems

this may feel like a paradox that cannot be solved. But let's take a step back and look at the bigger picture of module with methods and state.

imagine if we build a boiler machine.
we may not want to wire the power into the heater part to test that this machine can boil the water without testing the turn on button.
for this context, we want to test the complete machine not a component

the same with module, many times that it is designed that each method cannot live by itself, but work together as a state diagram 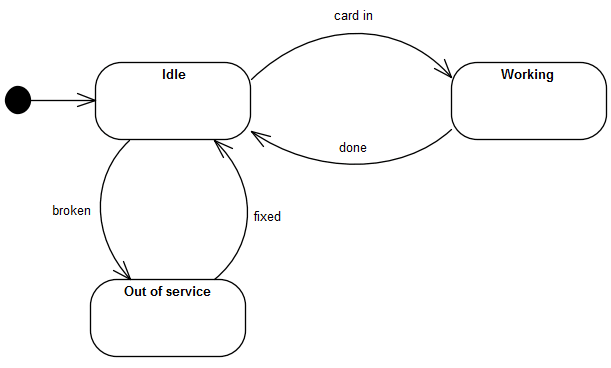 apply this with code module, not all method will work without setup by some other method and you can't set the state directly.

from the example above we may see that testing single method is not work well with encapsulated black box logic because the whole module isn't mean to be used by just that single method alone.
let's look at the problem we found again

because we can't verify the result of addItem() alone but we can look in another way, the addItem() is actually the passage to the checkout(). So we will test both of them together

we don't care to describe what addItem() do behind the scene. we only know that we need it before checkout(). so there is nothing like list or something internal in the test at all

the next problem was about setup pre-state, again we can just use the addItem together

and because we don't focus a test to just single method, let's remove a describe with the method name from tests and rename some tests

we can see some pattern here. there are 3 tests per (removed) describe scope with the new cart, single item and multiple items in both of them. let's try group them together

by grouping these together, not only we get the shorter name. we can also share the setup code in each describe block because it is tested on the same state

and if you try hard enough, you can phrase it to the given-when-then pattern.

I recommend to have multiple it or then per test if need. In this way it is easier to describe the behavior of your module
for example

even grouping by state and describe logic in the test name, it can make test name and body too long

Introduction to Software QA Tooling in 2022

Arpple
June 30th, 2022: What did you learn this week?
#weeklyretro #discuss #weeklylearn
5 reasons to start staging your code right now
#webdev #programming #productivity #testing
[Discussion] Give the challenges you have faced as a programmer
#help #discuss #programming #challenges

Once suspended, arpple will not be able to comment or publish posts until their suspension is removed.

Once unsuspended, arpple will be able to comment and publish posts again.

Once unpublished, all posts by arpple will become hidden and only accessible to themselves.

If arpple is not suspended, they can still re-publish their posts from their dashboard.