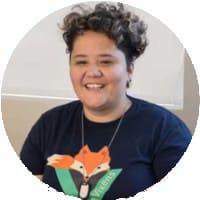 Diana delivered a very insightful talk about the link between DevOps, IoT (Internet of Things), and security. It comes down to collaboration and feedback.

DevOps is about collaboration between development and operations. Diana gave us this passage from the Vue.js docs regarding the effects of DevOps:

The adoption of DevOps culture, tools and agile engineering practices has, among other things, the nice effect of increasing the collaboration between the roles of development and operations. One of the main problems of the past (but also today in some realities) is that the dev team tended to be uninterested in the operation and maintenance of a system once it was handed over to the ops team, while the latter tended to be not really aware of the system’s business goals and, therefore, reluctant in satisfying the operational needs of the system (also referred to as “whims of developers”).

What this means is that DevOps works to bring solutions together for the benefit of the development and operations teams. For example, they may suggest using containers (like Docker) to limit the differences between the environment of a developer's laptop and the production server.

She explained that efficient DevOps will also provide faster feedback which bring about quicker & better enhancement/repairs as well as insight around performance and usage. With IoT, feedback regarding device performance and usage is analyzed and used to tune the product's quality for everyone's benefit.

The part of Diana's talk regarding security was eye-opening.

There is a huge lack of faith in the security of IoT devices by not only customers but developers too.

Not only IoT devices for smart homes are potentially security-light but wearables as well. Peoples' biometric data is out there in the cloud which can sound kind of scary. Imagine how you would feel in the case of a data breach. 😱 How much personal information and security are people willing to unknowingly give out in the name of convenience?

Why aren't more developers/companies focused more on security instead of delivering a product quickly? The answer is mostly about money unfortunately. Companies also deter from seeking outside consultation because people don't like being told what they're doing wrong.

Diana then gave suggestions on what to concentrate on for increased device security: secure update processes, authentication, encryption, & independent security assessments to name a few.

At the end there were a few questions to ask yourself regarding your own IoT usage.

It was a very interesting presentation focusing on collaboration, capturing valuable feedback, and being security-minded. There was so much information - one of the best talks that day.

Liveness Probes: Feel the Pulse of the App