This is a hacky way to run webdriverio and maybe other kind of node frameworks like protractor on WSL (windows Subsystem for Linux).

I would like to mention this still uses the npm for windows but only to install the wdio client; We have to install it because we need the chromedriver version for windows.

So basically you can run Ubuntu or other many distros on Windows, of course there are some incompatibilities but for now I prefer to use WSL instead of git bash, MSYS or powershell.

git bash sometimes froze or didn't show some logs and it's the same for MSYS (git bash use MSYS), I know there are other alternatives like cygwin or MINGW but kinda the same problems.

Node it could be a nightmare on windows, it depends on what are you doing. For example I lost many hours trying to make node-gyp work on windows.

I know I can use a virtual machine or docker etc.. there are many ways to have linux environment for develop software but I like to share this one, maybe it could be helpful for someone.

From windows store you can search for the linux distro you like to install. I choose ubuntu.

After the installation finish, you have to restart your machine and now you can type your distro on the windows start menu and open your terminal.

Note: it looks like this because I already installed tmux and some plugins.

Your local files it's on /mnt/c or /mnt/f it depends of how your partitions were made.

My only problem was the rights permission on the partition, it can only be modified by the root and the command to change the user seems to work but the access folder it was still only by root.

If you have the same problem, close the Ubuntu terminal and from powershell run the next command.

This command will restart WSL service and if you open your terminal again you would be able to modify your files without problem.

I can modify my files from windows on WSL and vice versa?

On windows I really like this node manager nvm-windows

Go to the release tab and download the installer it's very easy to install and use. With nvm you can install any node version and change from version to version easily.

You can do the same on your ubuntu terminal

start the webdriver config and install

From ubuntu you can create a symbolic links so create one from your home to your external drive. I have a external ssd and I can access from home easily thanks for the symbolic link.

Is important to install your projects on C or your external drives, it would be more easy to access and edit from Windows or Ubuntu.

Now you can install any other dependency on ubuntu we only need webdriver cli for windows.

Run the next command to generate the config file for webdriverio

and select your browser driver that you like. I choose chromedriver.

use your any editor and add paste this code

Now let's edit our package.json to add the wdio script. 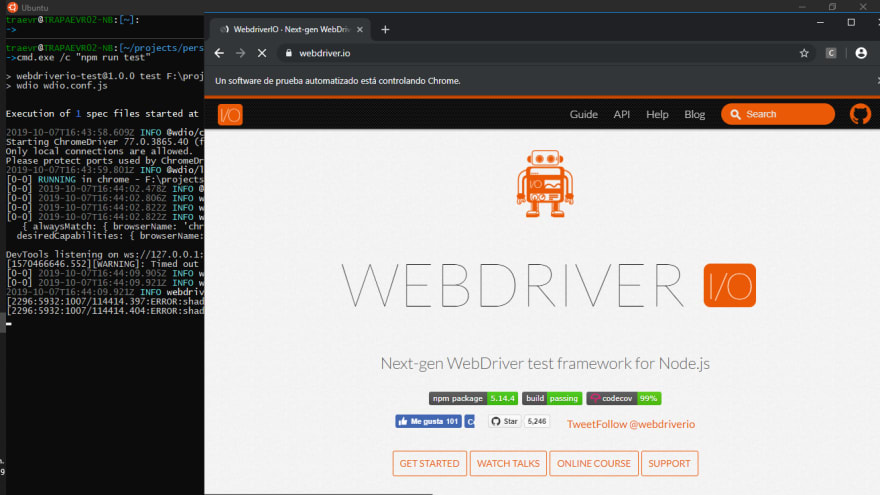 We can save the previous command on a bash alias.

thanks for reading any suggestion or recommendation would be appreciated.

Which one is the best test automation tool?