Welcome to the release notes for Yarn 3.2! This release is a little smaller than the 3.0 and 3.1, as we've hold off on some changes in preparation for our next major ... but more on that later 😃

As always, keep in mind those are only the highlights, the full changelog is much more comprehensive. And if you just happen to love reading our release posts, here are the past entries 👇

The Yarn org needs your help to make our work more sustainable! Please take a look at our OpenCollective and GitHub Sponsors pages for more details 😊

We implemented in 3.1 a feature we call "conditional dependencies". The idea is simple: if a package is listed in the optionalDependencies field and its os / cpu fields don't match the current machine, we don't install them at all. This pattern is today used by various tools like Esbuild or SWC to avoid overfetching dependencies that systems wouldn't needed.

One problem however is that while os and cpu are useful at differentiating systems, they aren't the only parameters at play. In particular, knowing the standard C library against which native modules are built is critical: using a module linked against the glibc with a Node release built against musl would promptly crash.

To avoid this, Yarn now supports a libc array field in the package.json that currently accepts any of two values: glibc and musl. Just like os and cpu, packages will be skipped if they don't match the host libc.

This isn't the final iteration; while libc is a good improvement, more parameters could be taken into account. Both Yarn and npm have open proposals to address this situation, and we'll see what we decide to implement.

It can be difficult to know how to react when facing errors. Our website tries to help with that by providing detailed explanations, but when you're in your terminal this might not be the first thing you have in mind.

The new yarn explain command will let you get all the details about an error, right from your terminal: 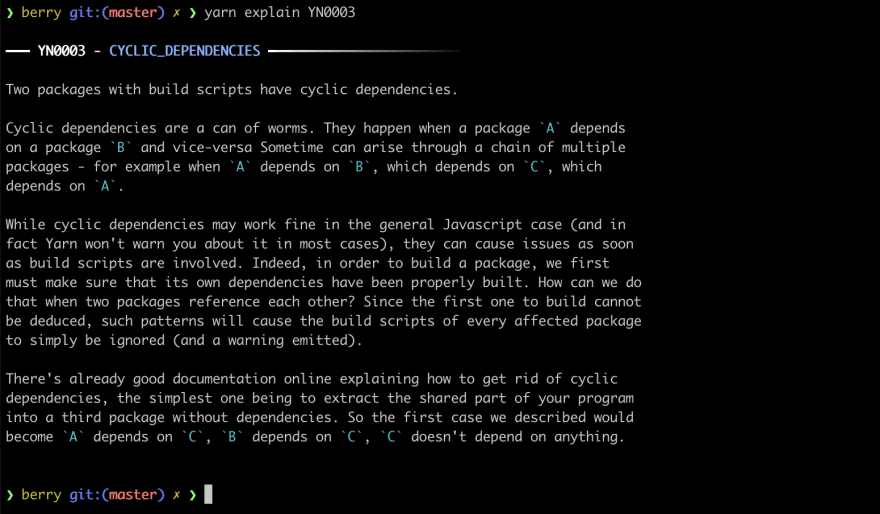 In the future we'll expand the documentation to cover more error messages, and may use yarn explain to aggregate some of the other similar mechanisms we already have (such as yarn explain peer-requirements).

Every version we look for little UI annoyances to fix. This time is no exception with a couple of neat improvements:

With 3.2 out of the door, we'll now start working on the next major release: Yarn 4! We have an issue highlighting the things we currently have in mind, but generally speaking expect us to decrease the friction when starting new projects. Some highlights:

And more! 🙂 We have plenty of other ideas to improve Yarn, so expect to see a significant amount of improvements in our next major - including lower friction when starting new projects or migrating older ones.

Say No to NgModule in Angular 14!