Appwrite is an open-source, self-hosted Backend-as-a-Service that makes app development easier with a suite of SDKs and APIs to accelerate app development. #30DaysOfAppwrite is a month long event focused on giving developers a walkthrough of all of Appwrite's features, starting from the basics to more advanced features like cloud functions! Alongside we will also be building a fully featured Medium Clone to demonstrate how these concepts can be applied when building a real world app. We also have some exciting prizes for developers who follow along with us!

Let's kick off Day 2 of #30DaysofAppwrite by discussing the first step of your Appwrite journey: Installing Appwrite. We'll cover the different ways to install Appwrite, as well as some tips to debug common issues you may face during the installation.
Appwrite uses Docker to install and run its services, so we can install Appwrite on any system that supports Docker, including MacOS, Linux and Windows. To develop locally on our machine, we need to first install Docker. If you have not already installed Docker, please visit the Docker official installation docs.

Installing Appwrite on any platform is as simple as running a single command in the terminal/command prompt. We just need to choose the right command for our platform. Below are the installation commands for different platforms.
Make sure you use the latest appwrite version from here

If you are on command prompt use

If you are on powershell use

If you run into issues during installation, here are some common problems to investigate. First make sure you have enough disk space and RAM to run Appwrite. Appwrite requires at least 1 CPU core and 512MB (2GB Recommended) of RAM. If ClamAV is installed, 2GB of RAM is required since ClamAV uses at least 1GB on its own. If your system doesn't have enough memory or CPU power, your installation may terminate without any information or error message.

Do note that ClamAV can be disabled if you are running low on resources. You can follow this guide to learn how.

Another common error that might occur during installation is caused by the Docker Hub pull rate limits. The installation script needs to pull the appwrite/appwrite Docker image from Docker Hub, so if you are not signed in to Docker Hub, you might run into this error. To resolve this error, you just need to login to Docker Hub using docker login command. For more information visit the official Docker docs.

More information on upgrading and migration can be found in the official docs.

Installing Appwrite on cloud providers is not much different than installing locally. We can deploy Linux virtual machines on any cloud providers and then follow the UNIX installation code to install Appwrite.

Checking the Health of Your Appwrite Installation

Running this command will show you the details of your Appwrite Server and status of various services. 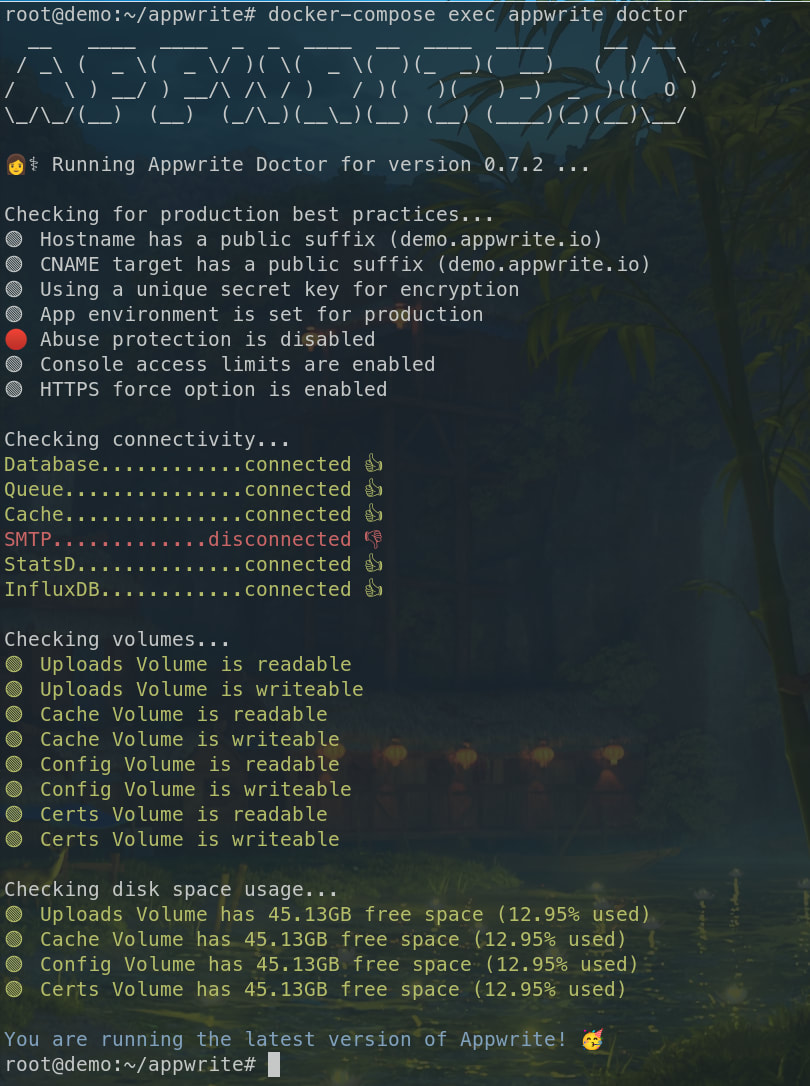 We hope you liked this write up. You can follow #30DaysOfAppwrite on Social Media to keep up with all of our posts. The complete event timeline can be found here

Feel free to reach out to us on Discord if you would like to learn more about Appwrite, Aliens or Unicorns 🦄. Stay tuned for tomorrow's article! Until then 👋