An SCM such as Git is more than just a database for source code. It's not only the thing you need to interact with to get code to production, but also a log of changes on a project.

It's not just the last couple of weeks of commits that are worth looking at. Any commit remains relevant weeks, months and years later.

Git is a great resource to document why a change was made and the considerations that were part of the process of creating the commit. It's the documentation of how the project evolved.

After some digging, you've found the change that introduced a bug, but you are no further in finding why the change was made in commit "WIP". You ask the person who authored it for more information, but they may not remember why the change from a year ago was necessary or they may no longer work at the company. So you're going to have to assume things about why a change was made and work off of that. That should not be necessary.

When you or your team are reviewing a Pull Request, the same thing is happening, but you can ask why a change was made while it's still fresh in their memory. But you first need to ask. To make a good review, the reviewer also needs to know if and which alternative solutions (if any) were considered and why. We need to make better commits to make that possible.

Why "The why" is Important

A commit with only a subject says very little. At best it tells you which change was made, which may be useful to tell what code was changed, but the reason why the change was made is missing.

Explaining why a change was made is a good moment to reflect on the process that got you there. Was the change made because it was the most logical choice, or were there alternative approaches, and why were these not chosen?

I use writing commit messages to rubber duck problems. When I'm stuck on a change, rather than grab my rubber ducky, I explain it in writing. This way, I also immediately have my commit message for my team.

To explain the "why" of why a commit was made, the commit message can explain the bug that's occurring that prompted a fix, along with its solution. This way, we have the reason for the commit as well as how the issue was fixed.

For example, there is a method that needs to be called with an Integer value. In the production app, an invalid argument error is reported on the line the method is called. Upon closer inspection, it is found that the method is sometimes called with a String value.

The quickest commit to write would be something along the lines of "Fix method call", but this commit without a message doesn't explain the actual problem. 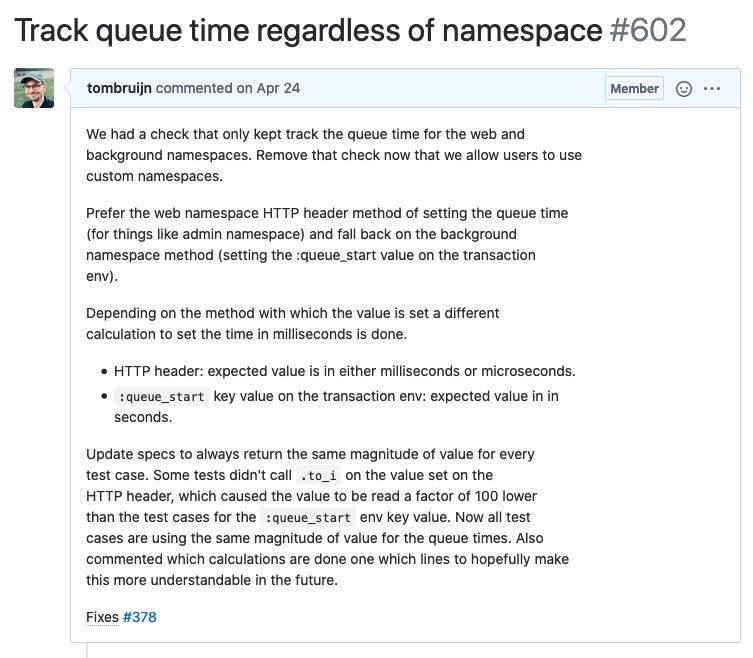 If a Pull Request has multiple commits, I advise you to use the same format. Repeating all the commits in the Pull Request's description as separate headings. 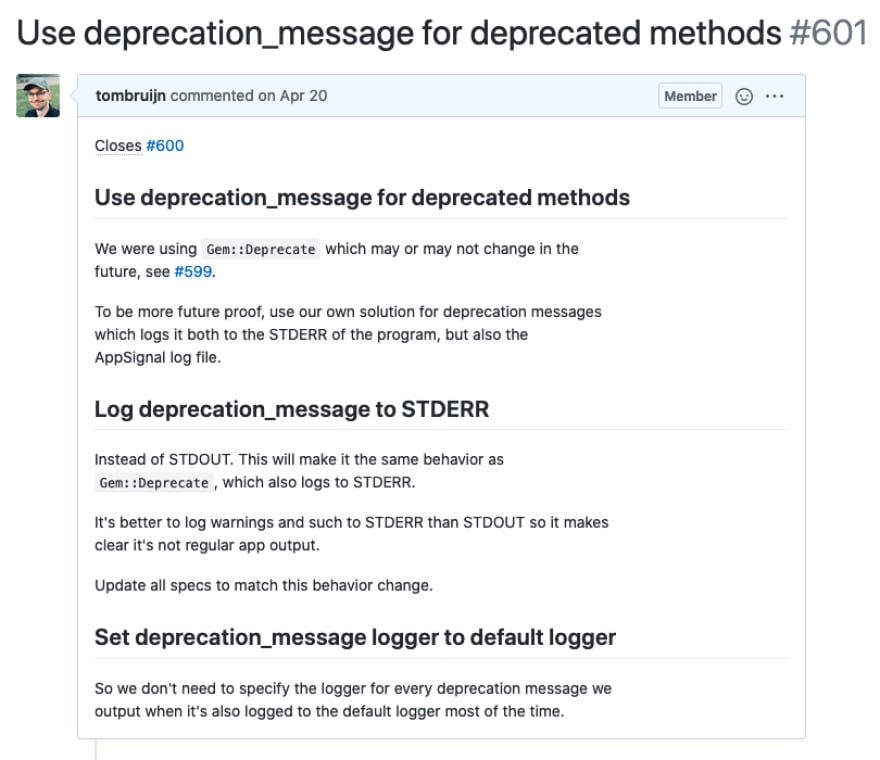 I use the important commit's subject as the Pull Request title or write a brand new one if it helps identify all the combined changes.

There's very little additional context a Pull Request needs after a good title and description. Commits should contain the important bits of a Pull Request. If more context needs to be added to the Pull Request body, it should have been part of one of the commits.

This also prevents a lot of back and forth between author and reviewers to explain the changes in a Pull Request, speeding up the review time.

If a set of changes start to become large and difficult to review, send in smaller chunks as Pull Requests early to get feedback on the changes. This way you know you're on the right track.

If you find yourself refactoring code while working on a change, send in a separate Pull Request for the refactor if possible. This way, the Pull Requests are easier to review because their size is smaller and focus only on one type of change. Your team can get started reviewing the refactor while you work on finishing the other changes.

Nobody truly likes to review Pull Requests with 20 commits or 20,000 line changes. It's difficult to find the important changes between all the noise.

Also, make sure every Pull Request can be merged independently, so it doesn't have to stay open until the entire change is done.

A reviewer doesn't need to experience the exact same process you went through to get to the final changes. If you first went for approach A and halfway through, switched to approach B, do not include both A and B, but only the final result. But do document the alternatives and reasons why approach B was chosen in the commit message.

Rebase your commits to present a tidy history with just the necessary changes. Nobody needs to see when you merged the upstream develop branch back into your branch. Or when you signed off for the day and committed all your changes into "WIP" to 'back it up' on a remote server. This is noise that hides changes in undescriptive commits, and why they were made.

Any additional commits as a result of reviews are of course fine, as they communicate the changes that were made as part of the review. Allowing reviewers to see what changes were made based on their feedback. (So no "Processed feedback" or "Update path/to/file.ext" commits.)

Git is about communicating with your team. Document why you made a change in your git commits. Your team, your future self, and your future colleague will thank you.

Make sure all the context needed is present in commits and Pull Requests in terms of why a change was made, how and what alternatives there were.

Improve Pull Request review turn around time by keeping them small. And make them better by understanding why a change was necessary and review it with that thought in mind.

5 habits every developer should adopt!