Starting out with embedded Rust, I found that reading embedded HAL documentation was really confusing. As I navigated around trying to find things I recall the feeling at times that things were going around in circles. Also, quite frankly, whenever I asked in different Rust circles, I couldn’t really get a clear explanation of how I should go about it. With some time and practice, at a certain point, I did manage to find my way around to reach what I need. Though if one would ask me to describe how I got to where I need, I wouldn’t have been able to answer.

My eureka moment came along when I learned how to write device drivers in embedded Rust (I created a whole series about it here). This was in addition to the significant time I spent navigating HAL source code. Interestingly enough, it turns out that the design of a HAL is quite similar in nature to a driver. From that point on, everything started clicking.

I should caution that there still can be a certain level of vagueness that hangs around certain items. This can be attributed to documentation not being in perfect shape. Still, it's not something that would prevent one from proceeding. However, I would say that it's also part of the open source effort/responsibility of each of us to contribute their share in filling the gaps as we grow in the space.

When writing program code for a microcontroller, there are generally two tasks that would be involved. The first is configuring the peripherals and the device, followed by writing the application code that uses the peripherals. However, using crates based on the embedded Rust HAL, takes somewhat a slightly different approach.

A general theme adopted in the embedded Rust HALs is that PAC-level peripherals need to be, so to speak, "promoted" to the HAL-level before they can be used. Recall in Rust, a common line of code observed in a standard template looks as follows:

Through this line, a handle, dp, is created to obtain access to all PAC-level peripherals, albeit not yet usable at the HAL level. By promoting the peripherals, a new handle is then attached to the newly created HAL-level peripheral which HAL-level methods can be applied to them. As such, relative to peripherals and the embedded HAL, three tasks need to be performed as follows:

I am stating this because it's important to understand what our goal is in finding what we want from documentation before starting to read it. Especially that here the case is slightly different than usual. This means that for task 1 we need to find how to create an instance of the promoted PAC-level peripheral. For, task 2, we need to find out what methods, structs, or even enums can be used to configure a peripheral. Finally, for task 3 we need to find the functions/methods we can apply to an instance.

Our initial goal is to find the method that allows us to promote the PAC level peripheral to a HAL-level. As such, if you open any of the Rust embedded-HAL-based documentation, on the main page, the device peripherals are all organized in modules. The following screenshot is an example from the stm32f4xx HAL: 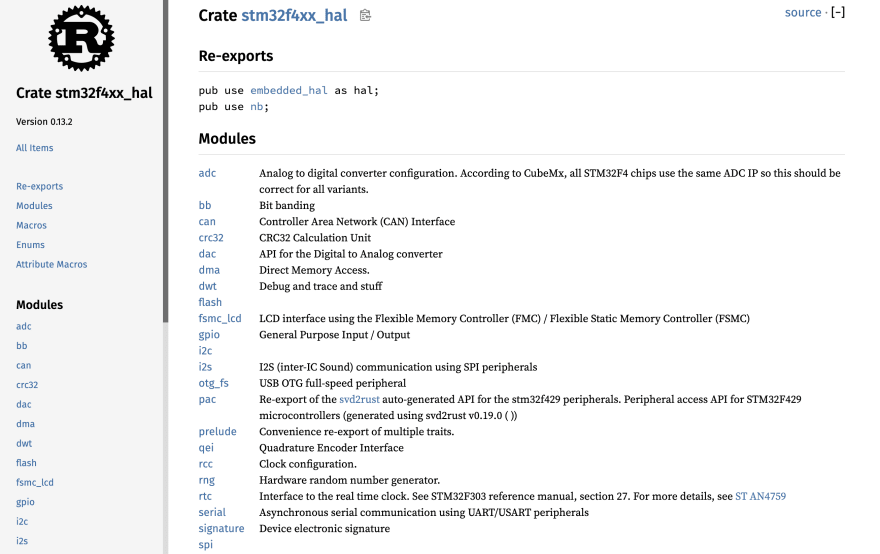 When clicking on a particular peripheral module name, the peripheral module page would typically include some description followed by a list of structs, traits, types, enums, functions, and even other modules in the current module. The following is a screenshot example of the ADC peripheral module from the stm32f4xx HAL:

Note here that in the ADC module there is only a modules and structs section with a bit of description on the side. Some other peripheral modules would contain much more than this. I chose the ADC module given that it's more compact to show in a single screenshot.

In the case of the ADC, you'll find that it's the struct named Adc.

So how about all those other structs, enums, types...etc. that appear on a peripheral module page? Those are all used for different purposes by the driving struct methods where a common case is passing different configurations.

Now that we've identified the core driver struct, in this step we need to promote and then configure the peripheral. Or even do both at the same time. As such, promoting and/or configuring a peripheral can take place by looking for one of the following:

As an example of a constructor method, we can look at the spi module in the stm32f4xx HAL. The core driver struct is the Spi struct, clicking on it, on the next page, you would find a long list of methods including a new method with the following signature:

Note that the first parameter is the PAC-level SPI peripheral that you would pass via the dp handle. Also, the remaining parameters are configuration parameters. Meaning that this constructor promotes and configures SPI and returns a HAL-level instance.

Going back to the spi module page, scroll down to the Traits section, you can also find a SpiExt trait. Clicking on it, you'll find several traits of which one has the following signature:

This is a trait that can be applied directly to a PAC-level SPI peripheral achieving the same as before though in a different manner.

Note that given the state of embedded Rust, it is not all uncommon to find out that a certain method isn't implemented. There are several ways to address this, you could either submit an issue in the GitHub repo of the hal and hope that the method is implemented sometime. Or you could do a pull request and update the HAL code with your own implementation. Finally, you can skate around this by implementing that particular feature at the PAC level manipulating registers directly.

I feel that navigating documentation is a necessary skill that is often overlooked. Given how to code up a certain application (ex. in a training course) versus trying to figure out how to do it yourself are totally two different experiences. In the latter, you need to stick yourself into the weeds of documentation trying to figure out how to do it for something you haven't seen before. This is something beginners often encounter and it's no different when learning embedded Rust. In this post, I give a primer on navigating Rust-embedded HAL documentation by breaking the process down into 4 main steps. This post is meant to give an initial direction for somebody starting out but is by no means comprehensive. Still, to become more comfortable, one would need to spend significant time navigating the docs and trying out different things.