This post elaborates on the 10 most common usages of an API Gateway such as Apache APISIX in architecting API-Led Connectivity. We understand different solutions where you can make use of the API Gateway capabilities to design reliable, high-performance, and simple APIs for other developers.

Here is the summary of 10 patterns that uses the API Gateway (but not all):

First of all, let’s revise once again these 3 terms like: API Gateway, API-Led architecture, and API-Led Connectivity.

API Gateway is a pattern formed by adding a layer between the client and the server that acts as a single entry point forwarding request from the client to the server. It allows all clients to access the services they want to access with a single API Gateway layer.

API-led is an architectural approach that puts APIs at the heart of communications between applications and the business capabilities they need to access, in order to consistently deliver seamless functionality across all digital channels.

API-led connectivity refers to the technique of using reusable and well-designed APIs to link data and applications which in turn it is based on API-Led architecture. It’s an architectural approach that looks at the best ways of reusing APIs to boost your innovation and move quickly in the market. At the most basic level, API-led architecture should address things like:

Let’s describe in subsequent sections each usage of an API Gateway to address common requirements/challenges that arise when adopting API-led architectures.

The first in the list is the API resource routing method which uses an API Gateway to route incoming calls based on unique resource identifiers (URIs). Implementing an API gateway as the single entry point to all services means that API consumers only have to be aware of one URL domain. In this way, it becomes the API gateway's responsibility to route the traffic to the corresponding service endpoints and also enforce any applied policies as it is depicted in the below diagram. 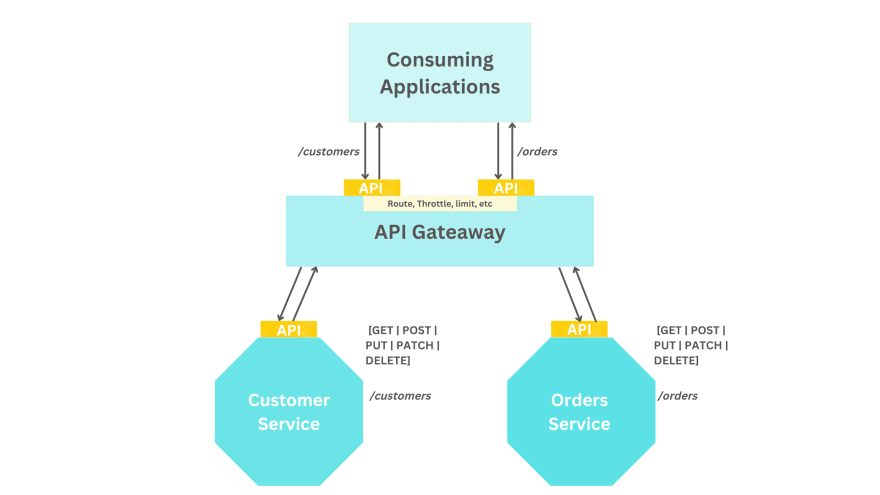 It reduces complexity on the API consumer side because the client applications do not need to consume functionality from multiple HTTP endpoints in case there are many services in the system. Also, no need to implement all cross-cutting concerns, such as authentication/authorization, throttling, and rate limiting separately for each service. Most API Gateways like Apache APISIX has already these core features.

Similarly, API content-based routing mechanism also uses an API gateway to route calls based on the content of a request (for example, based on the HTTP header or message body) instead of just the URI.

Take a scenario when database sharding is applied in order to distribute the load across multiple database instances. This technique is typically applied when the overall number of records stored is huge and a single instance struggles to manage the load. Instead, records are spread across multiple database instances. Then, you implement multiple services, one per unique datastore, and adopt an API gateway as the only entry point to all services. You could then configure the API gateway to route calls to the corresponding service based on a key obtained either from the HTTP header or the payload. 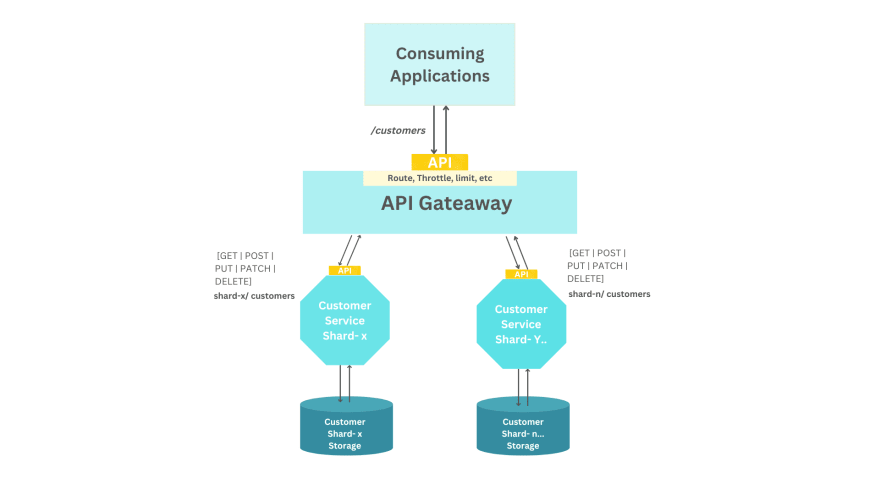 In the above diagram, an API gateway is exposing a single /customers resource for multiple customer services, each with a different data store.

API geo-routing solution routes API calls to the nearest API gateway based on where they originate. In order to prevent latency issues and other unforeseen issues that may occur due to distance (for example, a consuming application from Asia calling an API located in North America), API gateways and other service infrastructure have been deployed in multiple regions across the world as needed. For example, using different sub-domains for each API gateway in each region and letting the consuming application determine the nearest gateway based on application logic. Then, an API gateway provides internal load balancing to make sure that incoming requests are distributed across the available instances of a service. 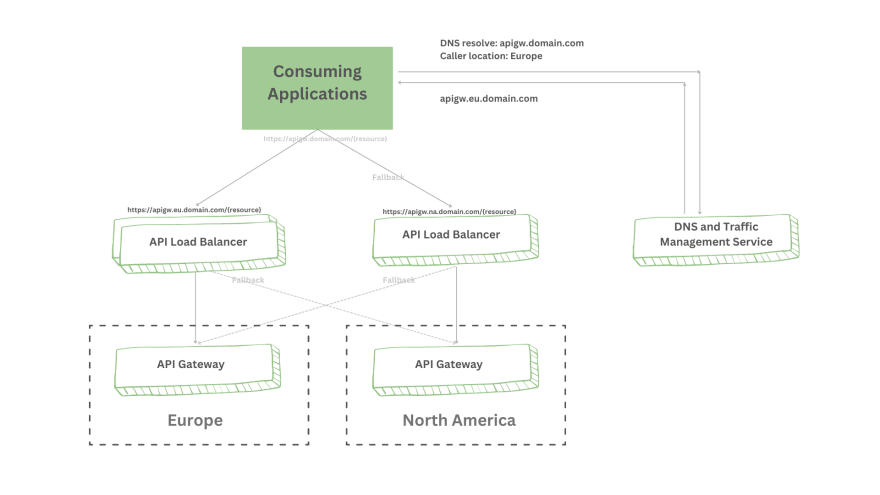 As you can see in the preceding diagram, it uses a DNS, traffic management service, and an API Gateway to resolve each subdomain against the region’s load balancer and passes the client request further down to the closest API Gateway.

This technique performs operations (for example, queries) against multiple services and returns the result to the client service with a single HTTP request/response call. Instead of having a client application make several calls to multiple APIs, an API aggregator uses an API Gateway to do this on behalf of the consumer on the server side.

For example, consider a mobile app that makes multiple calls to different APIs to show the data for a single screen. In this case, it increases complexity in the client-side code, over-utilization of network resources, and even poor user experience as the application is more exposed to latency issues. API Gateway can accept as input all information required, does request authentication and validation, understands all data structures from all APIs that it interacts with, and is capable of transforming the response payloads so they can be sent back to the mobile app as a uniform payload needed for the consumer. 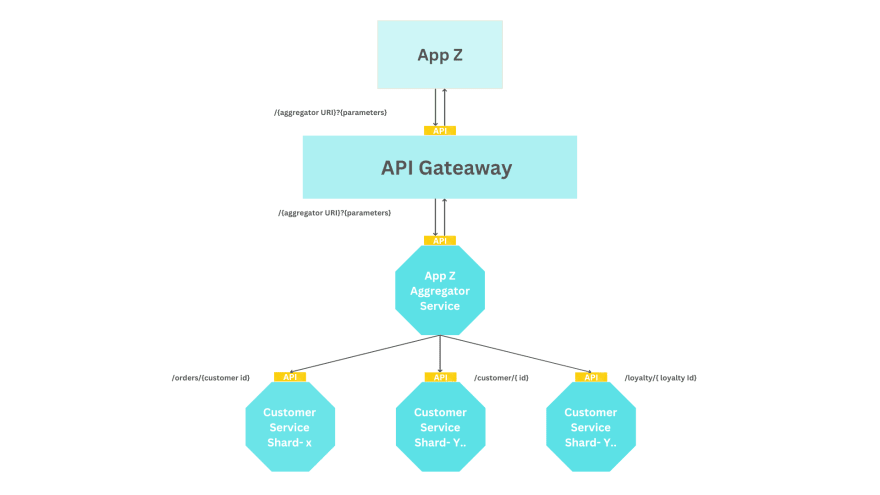 In this design, an API Gateway acts as a centralized authentication gateway. As an authenticator, API Gateway looks for access credentials in the HTTP header - for example, a bearer token, and implements business logic that validates those credentials with an IDP, identity provider such as Okta, Cognito, Azure Active Directory or Ory Hydra) typically using the OpenID Connect (OIDC) is an authentication protocol based on the OAuth 2.0 and checking whether they have access or not. 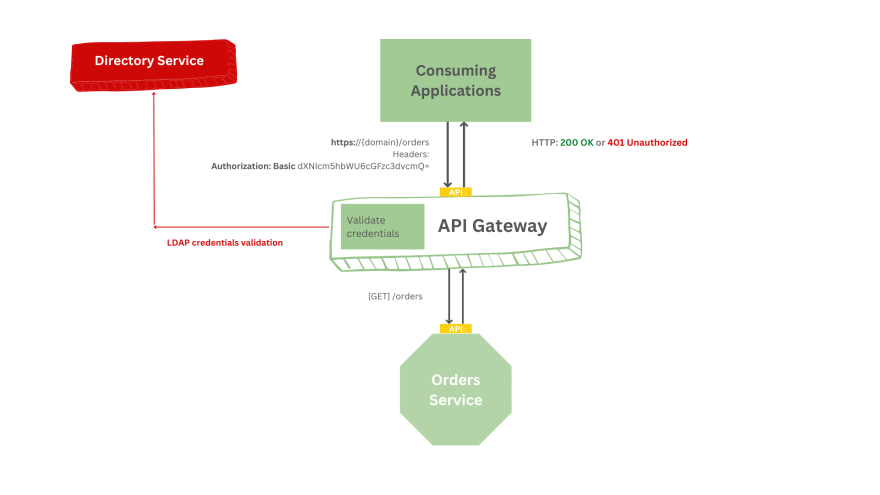 Centralized authentication with the API Gateway can solve many problems and have some benefits as it completely offloads user management from an application and it improves performance by responding quickly to authentication requests received from client applications. 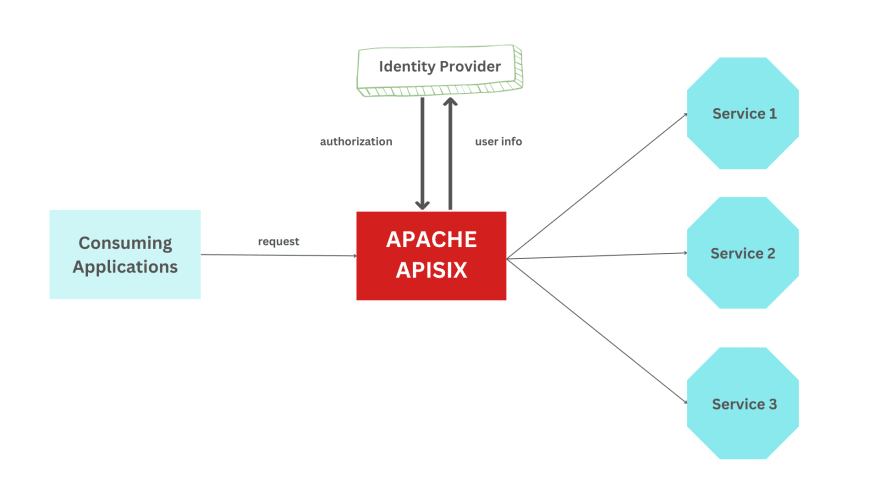 This refers to having the ability to convert payloads from one format to another over the same transport. For example, from XML/SOAP over HTTPS to JSON over HTTPS and vice versa. API Gateways, by default offer capabilities in support of REST API and some specialized API gateways support, in addition to payload conversions, transport conversions such as converting from Message Queuing Telemetry Transport (MQTT) over TCP (a very popular transport in IoT) to JSON over HTTPS. 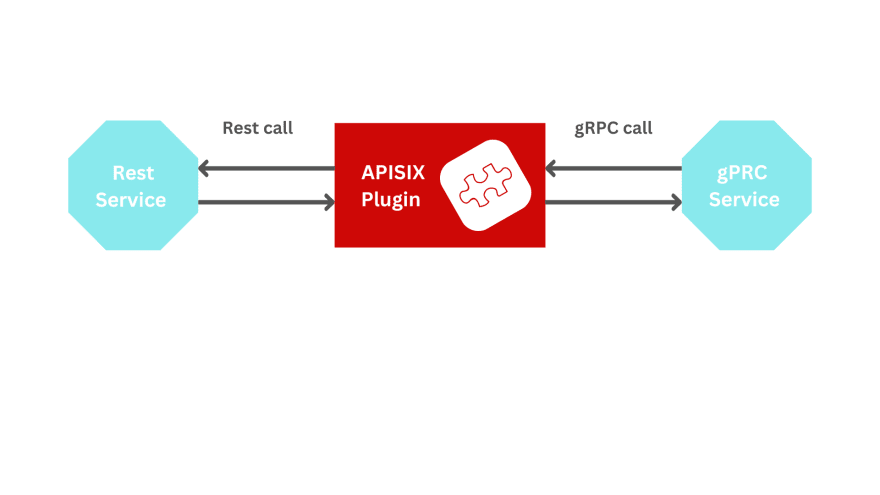 For example, Apache APISIX is able to receive an HTTP request, then transcode it and forwards it to a gRPC service, gets the response, and return it back to the client in HTTP format by means of its gRPC Transcode plug-in.

By now, we know that an API gateway offers a central control point for incoming traffic to a variety of destinations but it can also be a central point for observation as well since it is uniquely qualified to know about all the traffic moving between clients and our service networks. There is always the possibility to instrument the API gateways so observability data (structured logs, metrics, and traces) can be collected in order to use specialized monitoring tools.

For example, Apache APISIX provides pre-built connectors (plug-ins) that you can easily integrate with external monitoring tools. You can leverage these connectors to ingest log data from your API gateways to further derive useful metrics and gain complete visibility into the usage, you can manage performance, and security of your APIs in your environment. There is also a dedicated post on how to use these observability plugins.

API Caching is yet another level of caching that is usually implemented inside API Gateway. It can reduce the number of calls made to your endpoint and also improve the latency of requests to your API by caching a response from the upstream. If the API Gateway cache has a fresh copy of the requested resource, it uses that copy to satisfy the request directly instead of making a request to the endpoint. If the cached data is not found, the request travels to the intended upstream services (backend services). 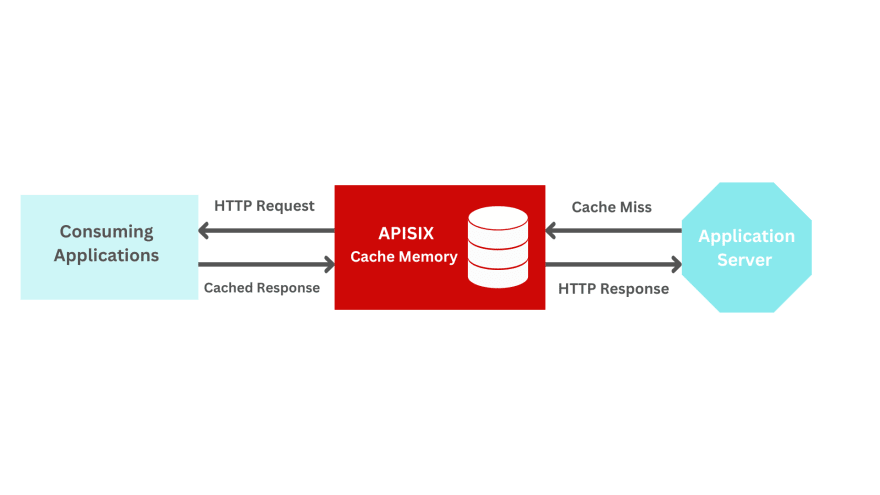 You can read more about API Gateway Caching with Apache APISIX in the dedicated blog post.

API services fail due to any number of reasons, such as networks issues, connection (failed to open a connection to a data source like a SQL Server database), API performance issues, or failure to authenticate to dependencies. In such scenarios, our API services should be resilient enough to deal with predictable failures. Also, we want to be sure that any resilience mechanisms we have in place such as error handling code, circuit breaker, health checks, retry, fallback, redundant instances, and so on. Modern API Gateways support all the above error-handling features including automatic retries and timeouts. 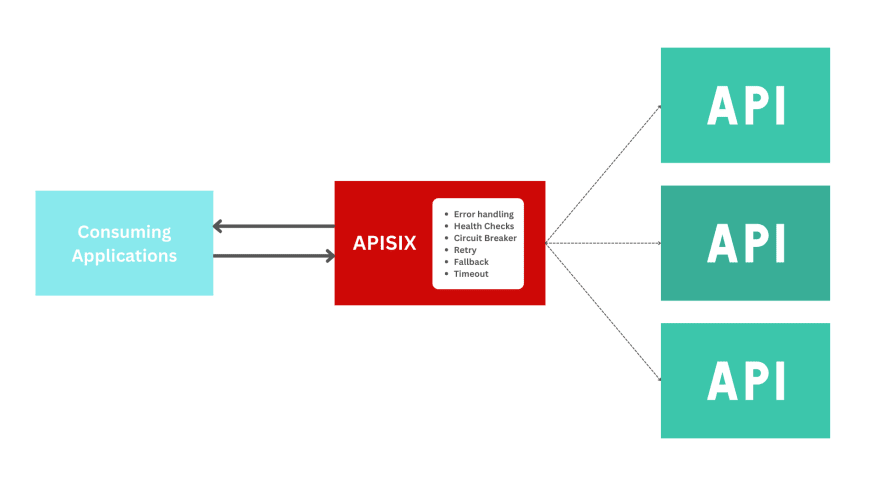 API Gateway acts as an orchestrator that can use this status report to decide how to manage the traffic, load balance to a healthy node, fail-fast due to some cascading failures or simply alerts you when it notices something goes wrong. API Gateway also ensures that routing and other network-level components work together successfully to deliver a request to the API process. It helps you to detect in the early stage and fix issues for your running application much more easily. Or the fault injection mechanism at the API Gateway level can be used to test the resiliency of application or microservices APIs against various forms of failures to build confidence in the production environment. 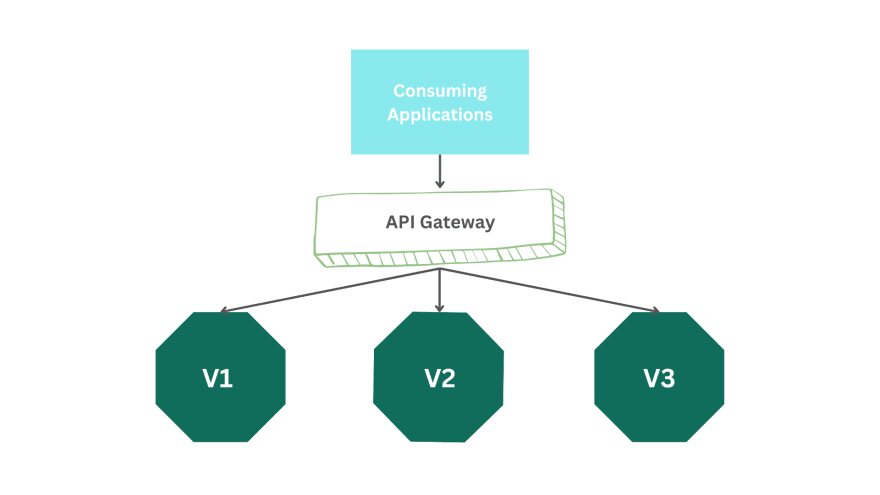 You can use an API Gateway to implement API versioning (Header, Query parameter, or Path) based. Evolving your RESTful APIs, a step-by-step approach blog post explains how to achieve versioning by configuring two routes in the API Gateway, one versioned and the other non-versioned, switching between them by enabling proxy-rewrite plugin of Apache APISIX.

Throughout the post, we described some of the use cases of API Gateway in designing API-Led architecture like how an API handles authentication, transformation, aggregation, caching, observability, how an API gateway can be applied in order to route access to multiple backend endpoints and so on. However, there are many other use cases one might think of.