Few moths ago while playing around with TypeScript types, I found myself wanting to convert an union to intersection type.

When I realized that I literally have no idea on how to do it,
As any other 10x developer, I googled it - "Union to intersection in typescript".

Immediately I found this amazing post by @ddprrt, after going through the post, I had no idea how that UnionToIntersection type worked, It looked like magic to me and didn't even understood the concept of contra-variant/co-variant so I just copy pasted the utility and moved away pondering how it works.

Couple months later when I got better at TypeScript I dived deeper into type variance and got a general idea about it.
This video from @titiancernicova helped me a lot to understand about variance in typescript along with this post, but still I sometimes get confused about variance.

Now, today with this post my aim is to make you understand the UnionToIntersection type without even knowing about variance.
I will explain the type step by step in simple terms so that you can understand it.

Let's first on a very high level visualize the anatomy of the UnionToIntersection type and see a demo of how it works.

As we go deeper unpacking the type we will discuss more details about each part.

let's say you have an union like this, which you want to convert to an intersection.

Let's drop in the UnionToIntersection type.
As you can see the type is now converted to an intersection.

Refer to @ddprrt's article to learn more about this section of the code, I'm skipping the detailed examples here since I don't want to repeat the same.

Let's extract out the first part of the type to a different utility type for easier understanding,
And go step by step of how the compiler will evaluate the type.

Simple enough right? Basically it converts the passed union to an union of functions.

Understanding how the intersection will happen

Now that we have this union of function.

let's assign this to a function and see what happens

What's happening here is that, to safely call the function foo which has a type of UnionOfFunction we have to pass a type which will satisfy both of the function's requirement. In other words the argument must be { a: string, b: string }

Voila! we get an intersection type in the param. 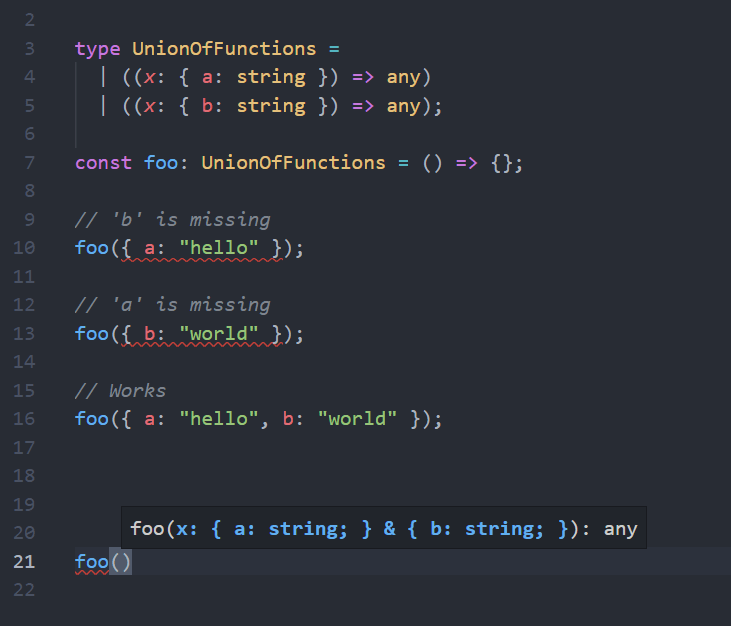 Now all that is left is to get the type of the parameter, which covers the second part of the type.

In this part we are first checking if the result of ToUnionOfFunction is equal to this (x: infer R) => any, but instead of passing T into the arg we are inferring the argument with the keyword infer

Let's inline all of it:

Infer keyword is like a magnifying glass of TypeScript which lets us inspect any certain type from the eye of compiler & extract it to a type variable, in this case R

Let's look at the whole thing at once.

I hope you got a basic understanding of how this handy type works.

Now as I said my aim with this post was to explain and breakdown the type without going into the topic of variance, So I oversimplified some things and how the intersection on the param actually happens so,

If you want to learn more about exactly how it works and go digging deeper into this topic here are few resources:

5 Tips for Black Women Learning How to Code

Once suspended, anuraghazra will not be able to comment or publish posts until their suspension is removed.

Once unsuspended, anuraghazra will be able to comment and publish posts again.

Once unpublished, all posts by anuraghazra will become hidden and only accessible to themselves.

If anuraghazra is not suspended, they can still re-publish their posts from their dashboard.

Once unpublished, this post will become invisible to the public and only accessible to Anurag Hazra.

Thanks for keeping DEV Community 👩‍💻👨‍💻 safe. Here is what you can do to flag anuraghazra:

Unflagging anuraghazra will restore default visibility to their posts.