I find metaballs fascinating: Pure shapes fusing and morphing with each other, making a weird gooey result. Such a simple idea, yet I had no idea how they could be implemented for a very long time.

I remember seeing an amazing interactive gallery using these metaballs on the canva.com website:

Note that the gallery doesn't work when following the canva.com link directly, but it does work when accessing it from the web archive website.

In this post, I'll share with you a bit of my path to enlightenment with these balls, and how I implemented them on my own, using only two SVG filters.

If you want to check the final result first, check out the playground on my website: https://garand.dev/projects/metaballs/

Let's start with the obvious questions: What are metaballs? The wikipedia definition isn't quite clear:

In computer graphics, metaballs are organic-looking n-dimensional isosurfaces, characterised by their ability to meld together when in close proximity to create single, contiguous objects.

Simplified, metaballs are blobs, which can feel some sort of attraction within each other, and can fuse into a single entity whenever they're near each other.

To skip this section and go straight to the final solution, click here!

The first idea I had was to use a purely geometric approach, inspired by this illustrator plugin: The two blobs (A and B) could be bridged with a rectangle (E), and then I could "subtract" two circles (C and D) to make a blobby feeling! 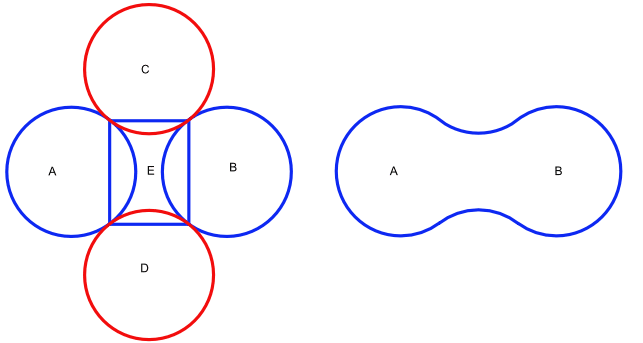 I actually implement this a while back, using FabricJS, you can find the playground here (source code), and it did look fine!

You can actually see the different segments when it didn't fully update between frames, which I find interesting:

As each element had to compare and create a bridge for each neighbor, it didn't scale as well as other approaches.

There were no clean ways of creating a magnetic type of attractiveness where the balls would reach for each other, which I absolutely wanted.

When a metaball was within reach of few others, each bridge was independent of each other, giving odd results when they overlapped 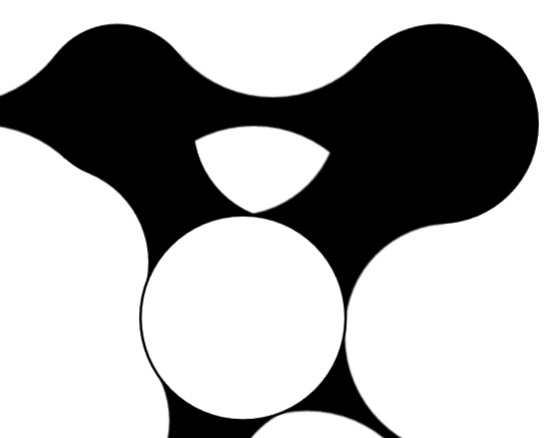 Therefore, I ditched this approach, and looked for a better solution.

Two years later, looking through my old experiments on github, I found the project and decided to tackle it once more, but this time solving the issues I had with the first version.

I found this post on webflow from @vinchubang which used blur and contrast to achieve their blobs: First, blurring the blobs themselves, and then setting the brightness and contrast to a high value to remove the regions with a low opacity while increasing the visibility of others with a high-enough opacity.

One big limitation with the use of the contrast filter is the requirement of uniform background, it doesn't support transparency or any type of dynamic coloring. These are limitations I'd like to get rid of, because I can!

With this new knowledge in mind, there are few essential steps for the technique to work:

In these step, opacity refers to the final opacity of the different layers, once they were alpha blended together, where the more layers of elements there are, the more opaque the color.

I started with the first step, blurring the elements. To do so, I used the feGaussianBlur filter.

Note that I added a lot of space for the width and height of the filter for the blur to avoid being cut once it reaches the edge.

As expected, this resulted in blurry red circles! 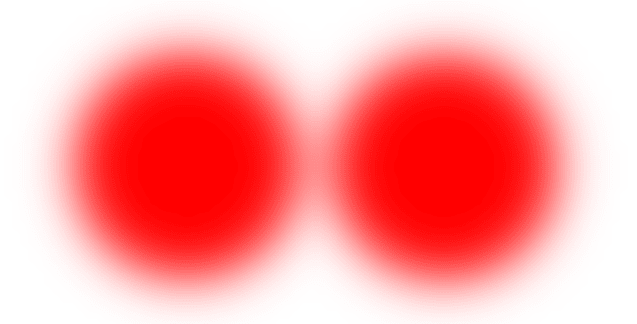 The next step was to juggle with the opacity without requiring a solid background.

After looking at the available filters, I ended up using feColorMatrix, which can manipulate the alpha data independently from the other channels!

As its name implies, it uses a matrix, essentially a 2d array, where each value controls a single parameter.
There are 4 rows, representing RGBA, and 5 columns, one per RGBA input and one to control perform an additional shift.

While it does sound kind of complex, in this case all that matters are two values, the two last ones, which I'll explain in more details shortly.

There are only two values which matter to get the desired effect:

With these two value, we can mimic an opacity threshold, by setting a high multiplier, and a small negative shift value.

The exact formula would to get our result is originalAlpha * multiplier + shift, where one shift unit is equivalent to 100% opacity.
I've made a quick spreadsheet to demonstrate the impact of both values on the resulting opacity: 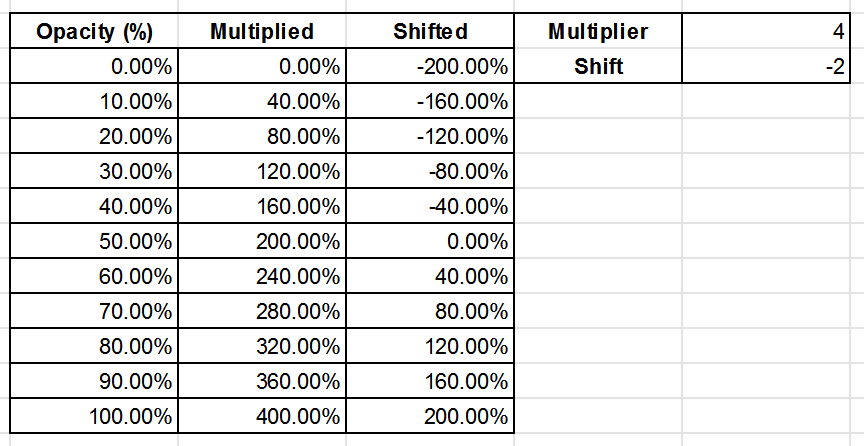 As the opacity is 8 bits of data, its maximum value is 255, so using it as the multiplier should give us a perfect granularity for our threshold. Then, for a threshold of 60%, we can define a shift of -153! 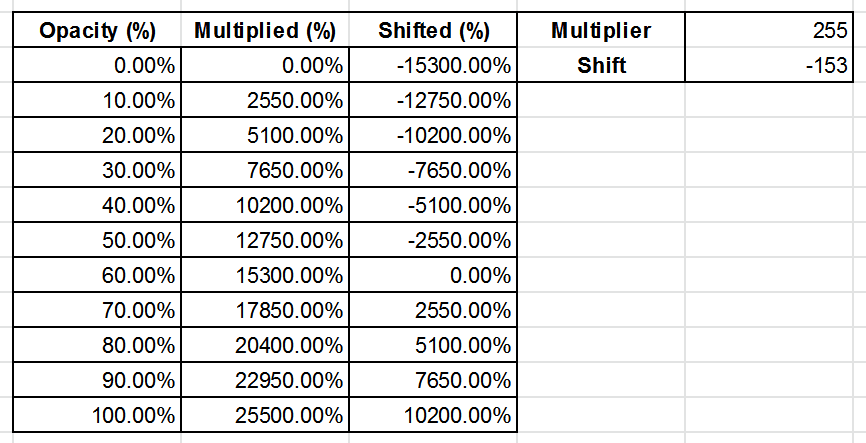 Let's start with an Identity Matrix, which does no changes on the incoming image. Then, adding the two modifiers into the matrix, we get a crisp looking result: 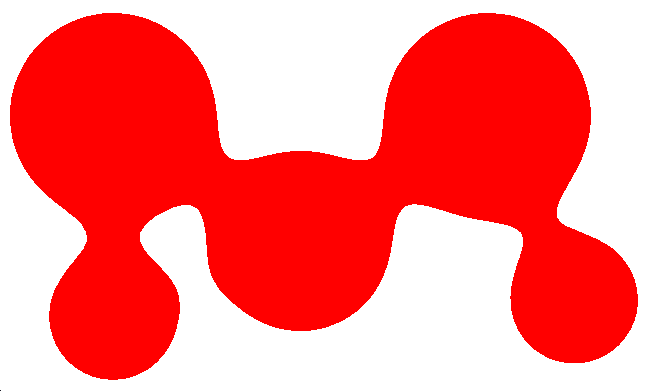 Now, notice that there are only fully opaque or fully transparent pixels. Using a multiplier of 255 has the bad side effect of removing all forms of anti aliasing for the blobs.

To add a bit of smoothness, I added reduced the values by an order of magnitude, setting the multiplier to 25 and the shift to -15: 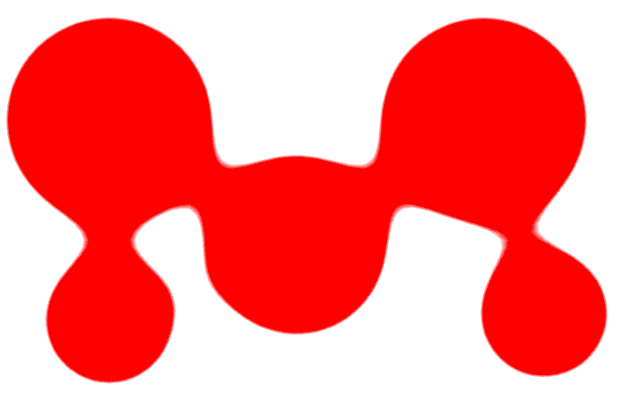 This is a lot smoother, even though some of the edges of the bridges are a bit blurry!

I'm sure I could get a better result by tweaking the values, but it's good enough for the moment.

While having metaballs is nice, it's not fun if we can't interact with them!
I won't go for a full gallery just yet, but start with simple drag and drop controls with the mouse.

The code should be self-explanatory: There is one variable to store the element being moved, and another one to store the X and Y offset of the original click, as well as the mousedown, mousemove and mouseup events to move the circles.
Ideally, I would also add the mobile event touch[start|move|end], but click only will do for this proof of concept!

I also added few sliders to play with the values in real time, feel free to check the source code for the implementation if you're interested.

Metaballs are a fascinating type of object, and now thanks to these two SVG filters, you can add them anywhere!
Unlike the geometric approach I initially attempted, using filters has many benefits:

And unlike the contrast method webflow used, it does support a transparent background, end even blending colors of the blobs!

Right now, these metaballs are still only a proof of concept, but I have few interesting projects I'd like to do with them, such as a lava lamp and a gallery similar to the one Canva did.

Keep in mind that I'm not the first one to find this way to make metaballs using the blur and colormatrix filters. While looking at other projects to do with this technique, I found this post from Chris Gannon on making a lava lamp and this one from Lucas Bebber on a gooey menu, both of which are over 5 years old!

Things like this reminds me that we're all doomed to reinvent the wheel at some point, and that great minds think alike!

Once suspended, antogarand will not be able to comment or publish posts until their suspension is removed.

Once unsuspended, antogarand will be able to comment and publish posts again.

Once unpublished, all posts by antogarand will become hidden and only accessible to themselves.

If antogarand is not suspended, they can still re-publish their posts from their dashboard.

Once unpublished, this post will become invisible to the public and only accessible to Antony Garand.

Thanks for keeping DEV Community 👩‍💻👨‍💻 safe. Here is what you can do to flag antogarand:

Unflagging antogarand will restore default visibility to their posts.