First before anything else: ⚠️ SPOILER ALERT! ⚠️ This blog post will discuss possible solutions to the first puzzle of Advent of Code. If you haven't completed it yet, and want to do it before looking into any solutions, don't read this blog post. Also if you're just a beginner in coding and you need to spend a lot of time figuring out how to solve the puzzle, this might get over your head and that's fine. I want to say that it's totally fine not to optimize your solution, since Advent of Code doesn't have any efficiency criteria for solutions.

This is my first year to participate Advent of Code, and I find it very enjoyable. I have a degree in CS, but since I graduated in 2018, I haven't done any coding puzzles. I solve the puzzles with some brute-force method first, but then I find myself thinking about if there's a more efficient solution. We have a group of people in our community that solve the puzzles, and when I mentioned the time complexity of my solution, someone said they had never thought analyzing the time complexity of their code. That's why I thought I'd write a blog post about big O notation and how to analyze your solution to understand it better. I use the first puzzle of Advent of Code to demonstrate how to analyze the code.

In the first part of the puzzle the assignment is the following:

Before you leave, the Elves in accounting just need you to fix your expense report (your puzzle input); apparently, something isn't quite adding up.

Specifically, they need you to find the two entries that sum to 2020 and then multiply those two numbers together.

The second part is the same, but with three numbers, that need to sum to 2020. I focus on the first part only, because I didn't optimize the solution of the second part, and also because it would make this blog post even longer. I used Python to solve the puzzle and will use that in the examples, too.

Time complexity shouldn't be thought of as the actual duration of the algorithm execution, but rather as how fast the duration grows in relation to input size. There are multiple classes that are typically used. I've listed some of them in the table and will show examples of them later.

So the easiest way to solve the puzzle is a brute force solution. As I said earlier, Advent of Code doesn't have any requirements for how efficient your solution is, it just wants an answer, so brute force is a completely valid approach to the problems. I first used the brute force solution to get the answer, and then later optimized my solution, so my first version of the code looked like this:

This is a very simple solution, and it works. The size of the list is 200, so it's not too slow to be solved like this. Let's get to the analysis of that solution then.
As I wrote as a comment to the code, iterating over a list is an O(n) solution. Because there are two loops, and the second one is inside the first one, they are multiplied. We multiply also the comparison complexity and the multiplication complexity, but since they're both constant, they don't affect the complexity of the solution. Thus the complexity of the solution is n*n = O(n^2). You can test this with a small list (for example of size 5) and calculate how many iterations it takes with that function. Remember to calculate the worst case, which is in this example that there are no two numbers that sum to 2020, and you go over the whole list. 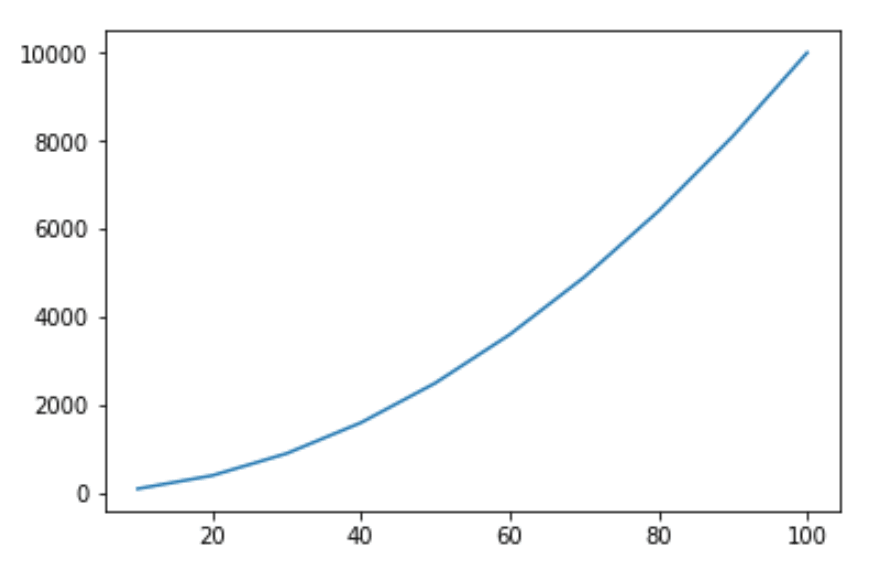 But since there's an early exit if the two numbers are found, wouldn't it mean that it's better than O(n^2)? Unfortunately not. Because big O notation is about the worst case, and the worst case is that either there are no such numbers, or they are the last pair to compare, the time complexity is still the same. 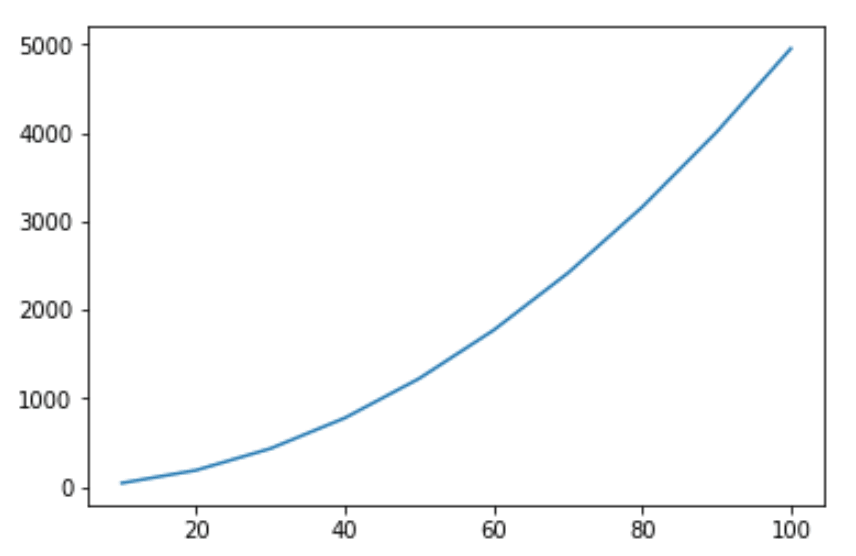 So you see that although the number of iterations is lower, the growth is as fast as with the simple version.

So after I had given the correct answer to Advent of Code and got a confirmation that I'd solved it, I started to think about how to optimize it. I came up with an idea that maybe I could sort the list of numbers and then use a binary search to find the number we were looking for. Python has a sorting function as built-in, so I didn't need to implement that myself, but I implemented binary search myself. I first implemented the iterative version of it but later refactored it to be recursive. Here's the code:

Now recursion makes the analysis of the algorithm a bit more complex, but as binary search is a commonly known algorithm, we know its time complexity is O(log n). If you are familiar with logarithm, it's easier to understand, but basically with each iteration the size of the list that we need to go through halves, so in total, the number of iterations is log n.

After making the improvements described above, I went to see how other people had solved it. On Twitter, I saw some vague tweet about using a set data structure, but couldn't wrap my head around it. Then I came here to see if someone had posted their solution and found Christopher's post. The solution in the blog post is simple and elegant, and it was more efficient than the sort + binary search solution. You can check the blog post but I also explain it shortly here.

So this solution is very smart because it uses a set as a data structure. Inserting a new element, removing an existing one, and finding a value in a set has constant O(1) time complexity. This means that only step 1 has larger time complexity, O(n), and all the other steps have time complexity O(1). When we multiply all of these together, we get O(n).

In the picture below you can see different solutions in a one plot, it might make it easier to understand how large difference there is: 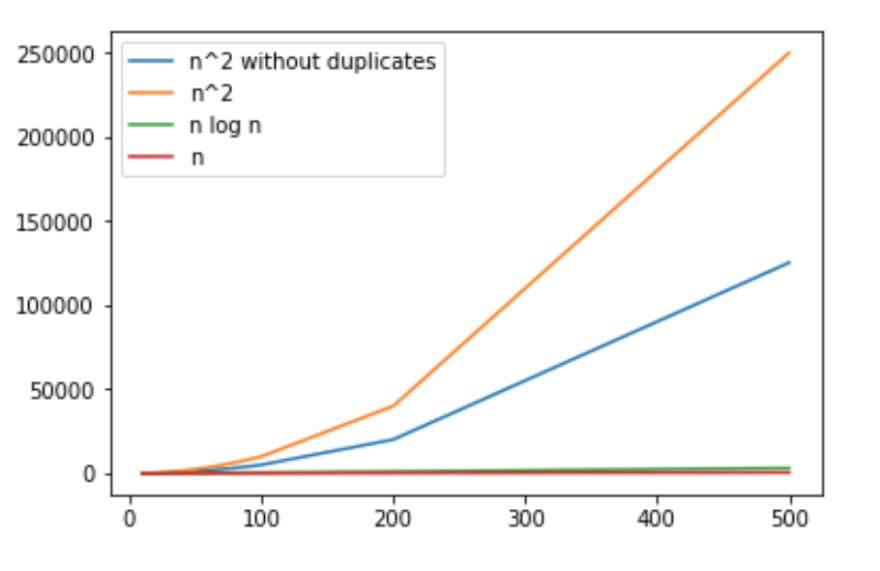 So when you analyze your solutions for Advent of Code or some other puzzle (or even your work!), the most important thing is to remember that big O notation doesn't describe duration, it describes the growth of the number of iterations in relation to the size of an input. In practice, some optimizations might make your code faster, but the growth in relation to the input size doesn't change. When you calculate the complexity, you can define complexity for each row and then either sum them or multiply them, depending on whether they happen in a row or a nested manner.

If you want to compare your solutions with others, comparing time complexity instead of duration might be a good idea if it doesn't feel too heavy. It's because when you measure duration, the context is important. The duration depends on for example your computer, if you have to same data, if the data is in the same order, the programming language you're using, etc. If you haven't analyzed your solutions and their time complexity before, I think Advent of Code provides nice puzzles to start with!

Solving day 5 of Advent of Code 2021 in JavaScript

Once suspended, annisalli will not be able to comment or publish posts until their suspension is removed.

Once unsuspended, annisalli will be able to comment and publish posts again.

Once unpublished, all posts by annisalli will become hidden and only accessible to themselves.

If annisalli is not suspended, they can still re-publish their posts from their dashboard.

Once unpublished, this post will become invisible to the public and only accessible to Anniina Sallinen.

Thanks for keeping DEV Community safe. Here is what you can do to flag annisalli:

Unflagging annisalli will restore default visibility to their posts.