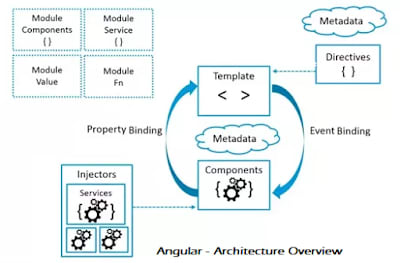 Angular is one of the widely used frameworks for building SPA applications. Angular made writing the client-side applications more ease by adopting the TypeScript.

Below are the key components in Angular.

Components play a key role in Angular. Every Angular app must have at least one component.

In Angular, a component represents a specific portion of the user interface (UI).

Each component will contain a selector that will represent the HTML associated with the component. To make a class a component, we need to add @Component({}), decorator.

In general, metadata termed as data about data. In Angular, metadata used to specify how a class needs to be processed by the Angular framework. A class decorator is used to define the metadata about the class. For example, any class that has @Component class decorator attached to it known as a Component.

String Interpolation  — represented as “{{ }}” also known as a mustache syntax. Angular process the expressions/variables insides the “{{}}” and insert the output into HTML.

Event Binding  — Allow the application to respond to user actions and inputs.

Directives are used to add additional behavior to your HTML.

There are two types of Directives

Attribute directives provide additional behavior or modify the appearance of your HTML elements.

In Angular, Services are singleton objects which get instantiated only once during the application lifetime. It contains data that needs to be shared across the application.

The primary objective of service is to organize and share the Business logic, and data with different components of an angular application.

Dependency Injection is a process of injecting the dependent objects into a class from an external framework/ class. So that the class can focus on primary responsibility assigned to it. Dependency Injector will take of handling the lifetime of injected dependencies.

using dependency injection, we can externalize the injecting the dependencies to the classes and managing their lifetime.

Originally published at http://www.techmonks.org on December 18, 2019.

You Don't Have To Use Observables In Angular