You might need your program to choose a random lucky winner from a list of people participating in a lottery or maybe you want to chooses a random fruit from a list of fruits the doctor made you. There are many use cases for this library and let us see how we can use this library.

Now that we have imported the library, let us quickly go through some of the common and important functions the library comes with

Let us see random.choice() first
This will pick a random item from any iterable object (list, string etc.)

So in the above image we can see that each and every time the function is run, it will print out a different value as it is picking out randomly

Now this is an interesting function and probably the one most are looking for. It basically picks out a random number from a range of numbers

There are 3 arguments taken in of which the first two are compulsory and third one is optional and be default 1. But what are the arguments?

Now does that sound similar?
Yes, this are the exact same arguments take in by the range function which is in-built in Python. The random.randrange() function basically creates a list from the range with the arguments given and then picks out a random.

Now this one is a pretty simple one. It returns a float value between 0 and 1

Now this one is a bit tough to understand. So the seed function is basically used to save the state of a random function so that it can generate some random numbers on multiple executions of the code on the same machine or on a different machine for a specific seed value. The seed value is the previous random value generated by the generator or if run for the first time, it is set to the current system time.

As the name of the function suggests, we can use it to shuffle a list i.e. change the position of the items in the list.

This one is pretty similar to random.randrange() but then returns a float value instead of an integer value and does not take any step in input

Takes 2 arguments as the lower limit and the upper limit. The returned number is between these 2 values and can be anyone of them as well. 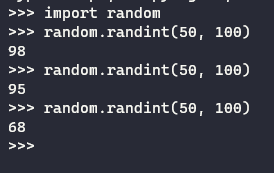 So that was some of the most important and commonly used functions of the random package and that is it for this blog!!!

Link to random package docs if you want to explore more - https://docs.python.org/3/library/random.html

Python Daily exercise 1: Generate a list of even number