A lot of complaints I heard when starting with Angular are about the sheer amount of files you get even on simple apps. When looking at the default starter template you get from Angular CLI's ng new command, it's true that it can be a bit overwhelming if you're not used to it.

But it doesn't have to always be that way. In this article, we'll explore how we can create a smaller and simpler template that's also easier to grasp for beginners, following the YAGNI principle.

Note: what we'll discuss here doesn't aim to be a new universal starter to replace the default one for all use cases, but rather an experiment on how it's possible to make things simpler.

Make sure you have a recent Node.js runtime installed (at least v14), and let's start by installing the Angular CLI.

This command-line tool is used to initialize new projects, among other things. After installing, you usually use it to create a new Angular project with the ng new command, but hold off a bit!

If you're old enough, maybe you remember using nLite to slim down your Windows install, back in the day? We'll take a similar approach here with the Angular starter to create a "ngLite" template, making sure to keep the number of files to a minimum..

Note: In the following sections, we'll take some time to understand the base application template and how it can be slimmed down for simpler projects. If you want to skip directly to the end result, you can use the command npx degit sinedied/ng-lite-starter my-app that will use this pre-made github template, but you'll miss all the fun 😉.

Slimming down the starter template

Let's create our app with this (long) command:

After the files are generated and the dependencies installed, let's hop into the ng-lite folder and start with some cleaning, removing dependencies we don't need.

Now let's have a look at all the files we have:

The .vscode folder contains configurations related to the Visual Studio Code editor. It provides tasks to debug your app when pressing F5 key, and suggests you to install the must-have Angular language service extension when you open the project. If you don't use VS Code though, you can remove this folder.

Next, we'll slim down a bit the number of files at the root of the project. You can see two tsconfig.json files there, used for TypeScript configuration. This separation may be useful when you want to use a different configuration for your tests, which is the case for the default setup created by ng new, but we don't need it here. Add these lines coming from tsconfig.app.json at the bottom of the tsconfig.json file:

We'll need to change a bit the angular.json file before your app can build again, but let's keep that for later.

Now, there's another file that we can get rid of: .browserslistrc. It's a file that tells which browsers you want to support, and the Angular build system will adjust the CSS and JS output accordingly. Instead of having a separate file for that, you can add this entry at the end of the package.json file:

Then you can remove the .browserslistrc file.

In the src/ folder, you'll find a file named polyfills.ts that may contain polyfills, small pieces of code used to provide a compatibility layer for newer features. If you're targetting recent browsers, you can get rid of this file and just add the zone.js import at the top of main.ts:

Now, there's a folder named assets/ that you can use to put any assets (images, fonts, JSON files...) you want to be copied to the dist/ folder. It contains an empty .gitkeep to get the folder stored in the git repo, as git doesn't store empty folders. We can simplify this structure a bit, by also grouping our future assets with the base index.html and favicon file:

This doesn't change much, but it's more in line with what you can find in almost all other web frameworks (React, Vue, Svelte...) and it means that you can easily add any new files to be placed at the root of the dist/ folder without having to edit angular.json every time, something we'll have to do once a bit later.

The next change we'll do here is get rid of src/app/app.module.ts. Starting with Angular 14, we can create apps using only components and that's perfect as it's all we need to get started.

⚠️ Keep in mind that Angular Standalone components are still in preview, so the API may still change in the future.

Edit the file src/app/app.component.ts, our entry component, and add standalone: true at the top of the component properties:

We'll finally update the entry point of the application located at src/main.ts, to bootstrap our app using our component. Replace the content of the file with this:

We'll keep the rest of the files as-is as they will be useful for our app:

The angular.json file is the (rather verbose) configuration file that tells the Angular CLI how to run your project's tasks, such as building your app. Since we changed a few things from the default app structure, our final step it to update this file to reflect our changes.

Wheew! That's a lot of changes, but we managed to simplify our starter template by quite a lot while still retaining essential Angular features. Look at this screenshot: 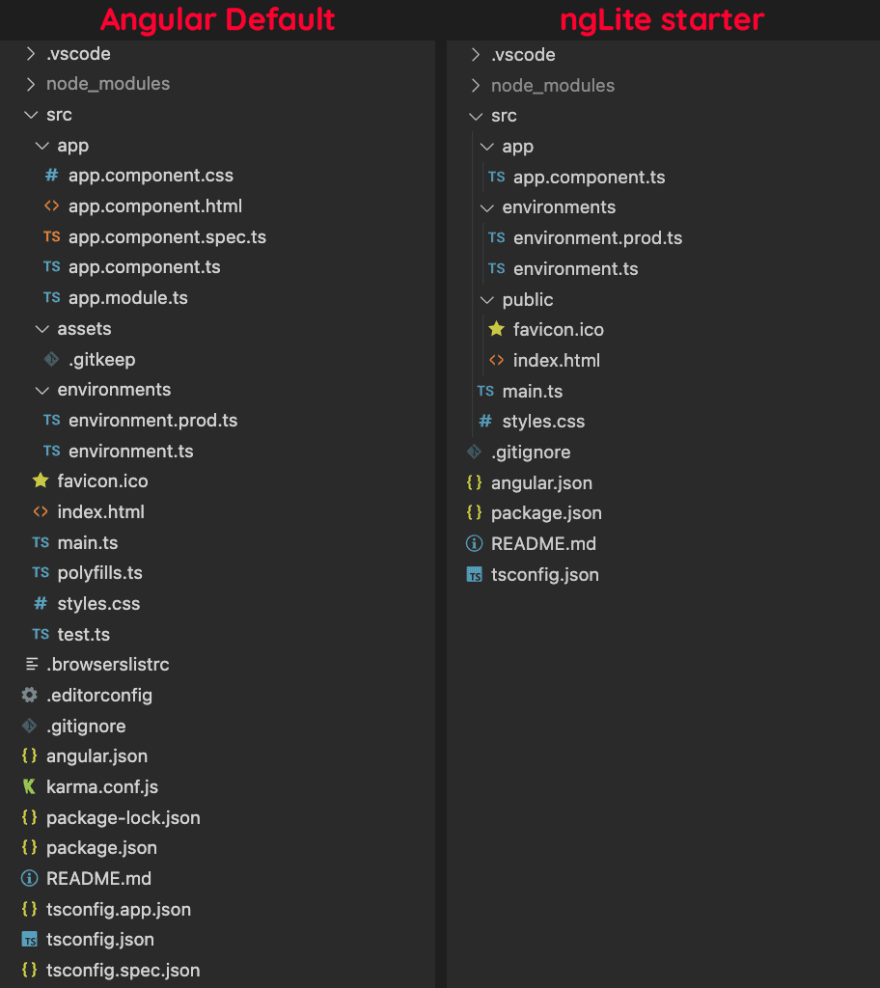 Of course, that's a bit tedious and not something you want to do every time you start a new project! You can use this github template if you'd like to use this starter again in the future, or you can make your own.

You may have noticed that this template doesn't include any testing tools. This is fine for learning and personal projects, but it's not a good idea for a production app to skip unit testing.

While the default Angular starter includes unit tests, it makes use of the older and clunky Karma/Jasmine combo for unit testing.

When you need unit testing for your project, you can use the much better and faster testing framework Jest with our ngLite template by adding a few extra steps:

You can now run your tests with ng test or ng test --watch.

If you followed closely, you've seen that we didn't even include some of Angular's core libraries like @angular/forms or @angular/router. Well, that's not because you're writing an Angular app that you have to use all of the provided libraries! For sure they're convenient, and you can always add them back later if you need them, but you can also build your entire app without them.

That's what we'll explore in a further article. Now that we have a simpler starter template, why not try building a complete app, and keeping the code as simple as it can?

In the meantime, you can have a look at this todo list app built from expanding on that idea.

Once unpublished, this post will become invisible to the public and only accessible to Yohan Lasorsa.

Thanks for keeping DEV Community 👩‍💻👨‍💻 safe. Here is what you can do to flag angular:

Unflagging angular will restore default visibility to their posts.