At the time of this writing, I am working on a UIKit application for a client and wanted to share how I set up programmatic projects in Xcode. SwiftUI is quickly becoming the standard for building user interfaces for Apple's ecosystem, and I'll be updating my app RoadHazard with the framework once I'm finished with this client's project!

I prefer programmatic UIs over Storyboards, and again SwiftUI brings this to a whole new level. In my experience, using a Storyboard-based app can get hectic and quite sluggish. Swift provides the same Auto Layout functionality that you'd find on a storyboard, and the transition to programmatic UIs is actually quite smooth.

The first thing you'll want to do is create a new "Single View App" in Xcode. Make sure you are using the Storyboard interface. 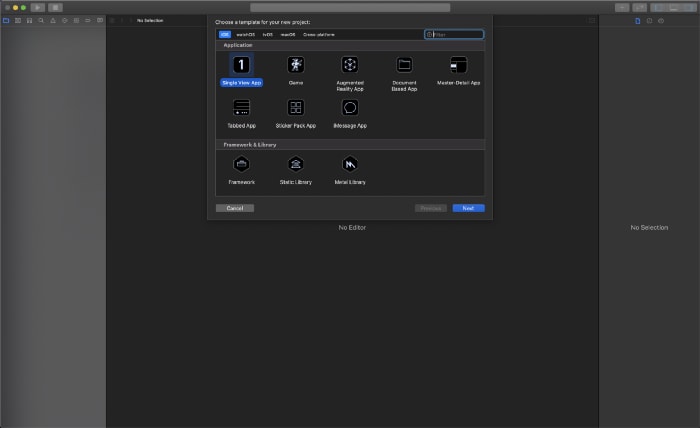 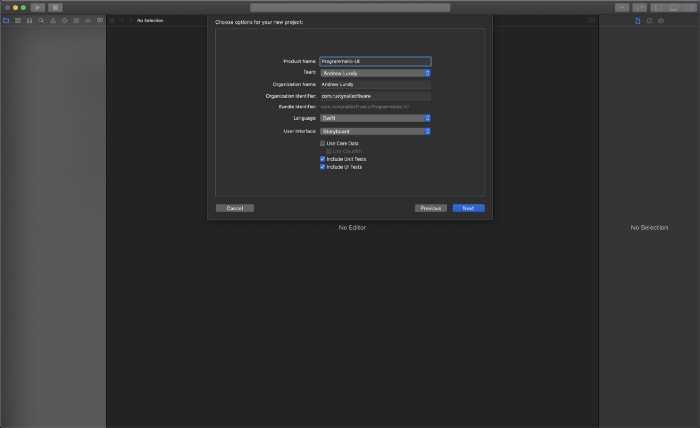 Secondly, go to the General Settings of your target, and under Deployment Info, you should see a dropdown option labeled Main Interface. 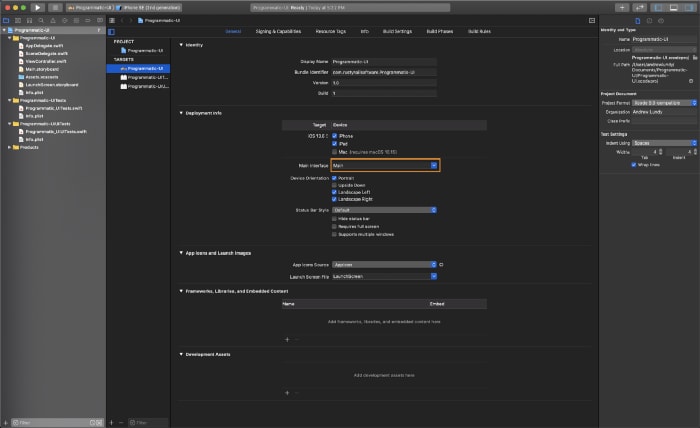 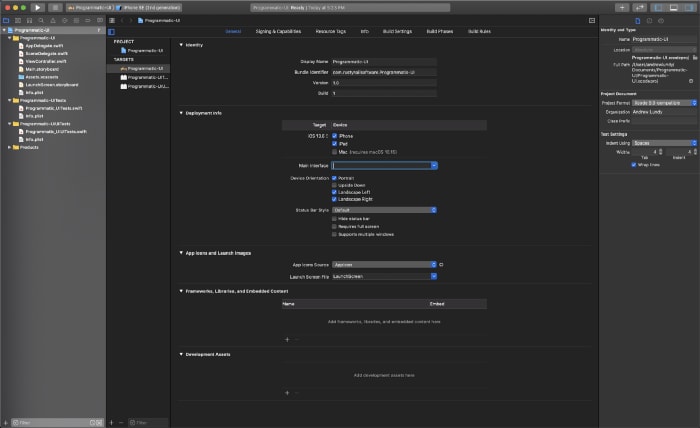 Next, go ahead and delete the Main.storyboard file by either Right-Clicking -> Delete or pressing Command (⌘) + Delete. This will produce an alert that asks you if you want to move the storyboard file to the Trash, or only remove the reference to it. 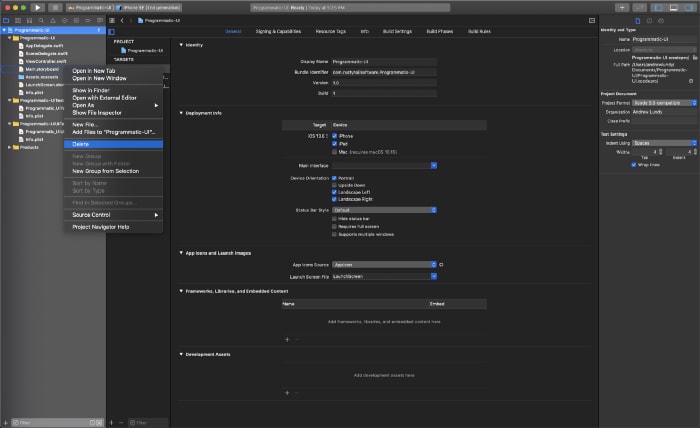 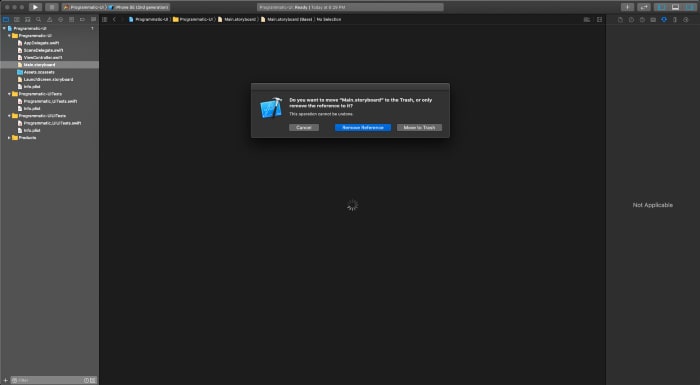 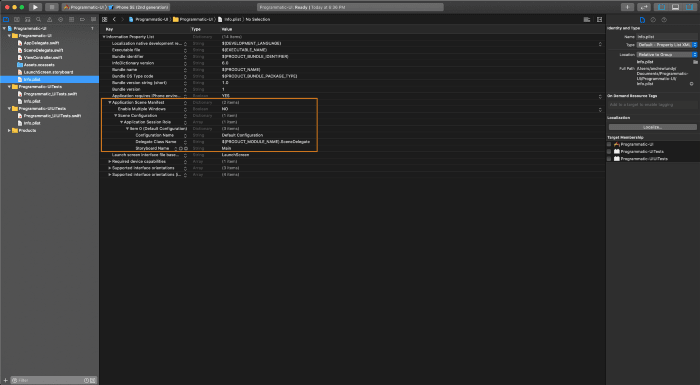 If you do not remove the "Storyboard Name" key after removing the Storyboard file, and Main Interface setting of your target - the app will crash, and you will receive the following error:

Terminating app due to uncaught exception 'NSInvalidArgumentException,' reason: 'Could not find a storyboard named 'Main' in bundle NSBundle.

The last thing that we're going to do will take place in the SceneDelegate file. At first, the class should contain five empty functions, and one named willConnectTo, which includes a guard let statement. We'll be working within this function. Please note that this function is called during the process when the app is starting up. 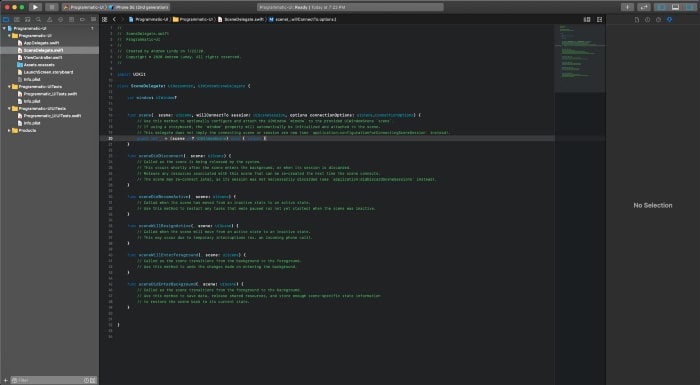 First, you'll want to store the scene in a variable. To do this, we just give the guard let variable a name. It's currently marked with an underscore, which means this variable doesn't have a name. This type of syntax is also seen when you want to exclude the labels when you call custom functions, amongst other uses.

Go ahead and change the guard let statement to read as:
guard let scene = (scene as? UIWindowScene) else { return }

The final step to getting started with a programmatic project is making the window you just created the key window of the app and showing it. You do this by calling the makeKeyAndVisible method on the window:
window?.makeKeyAndVisible() 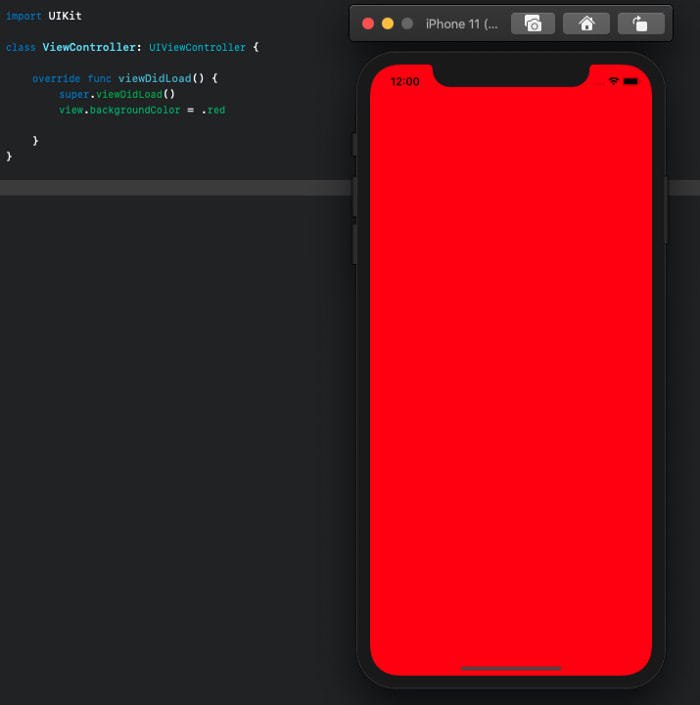 There you have it. Creating a programmatic project in Xcode is quite a simple process, and I personally prefer working with programmatic user interfaces compared to Storyboards. One is not better than the other - as they each have their pros and cons. I'd recommend learning and working with both, then deciding on which process you like more.

As Apple's tech continues to advance, SwiftUI is becoming the standard way to build user interfaces for their ecosystem. That being said, I believe that there is still value in knowing UIKit as it shows you the foundation of how iOS applications are built. SwiftUI is built on top of UIKit, and you can actually integrate the two frameworks in one app.

If you'd like resources on where to get started with iOS development, you can check out the projects laid out in the Hacking with Swift series by Paul Hudson. He offers both a UIKit and SwiftUI path - 100% free. Start with some of his projects, but be sure that you branch out and build something on your own as this is where the real growth as a developer comes.

Until next time - keep spreading the love, building innovative software and encouraging other humans.

Be prepared to migrate your Vue app to Vue 3