Lately I have been getting a little more familiar with the Git command line and I have to say I am liking it. The reason why I had stayed away from it until now was that I found the GUI(SourceTree in my case) to be a safe/easier interactive medium for something I was not at all that familiar with. However I realize the CLI is faster for issuing commands so I made a conscious effort to start familiarizing myself with it.

The idea of this post was to demonstrate and explain the most frequent commands I typically use and will hopefully help others interested in understanding the Git CLI basics but may be a little apprehensive.

Disclaimer: I know there are many more commands that I am excluding however I just wanted to focus on what I believe are the most frequent most used day to day commands for a beginner.

I wanted to not only list the commands with their explanations but provide a real example against a sample application for better context.

To follow these examples, you will need to have some pre-requisites installed.

What I use (in case you were wondering from the images)

What I will cover

I will list the commands with their explanations, then apply them on a sample application which I will build completely from scratch using .Net Core.

I will be 100% in the command line from creating the application to interacting with Git outside of using an editor to update files.

Commands I will be using:

If you want to set the configuration globally you simply add the ‘—global’ switch.

You add the -m switch to attach a message to your commit.

First, we need to create our .Net Core Console application to work with.

Next just browse to a directory in which you want to create the new project, in my case I will create in ‘c:\dev\github’.

Now create the application and name it ‘GitCommandLine’ by typing ->

You should see the below..

Now that we have our dotnet core console app created, now let’s start with Git.

First, Lets’ navigate in to our project directory we just created.

Now we want to initialize our new project as a Git repository so we will want to use the ‘Git Init’ command like below.

Now we want to set the config specifically the Identity (user name and email) to associate with our commits, I will use

Note: The configuration scope is just this project so I excluded the –global switch. 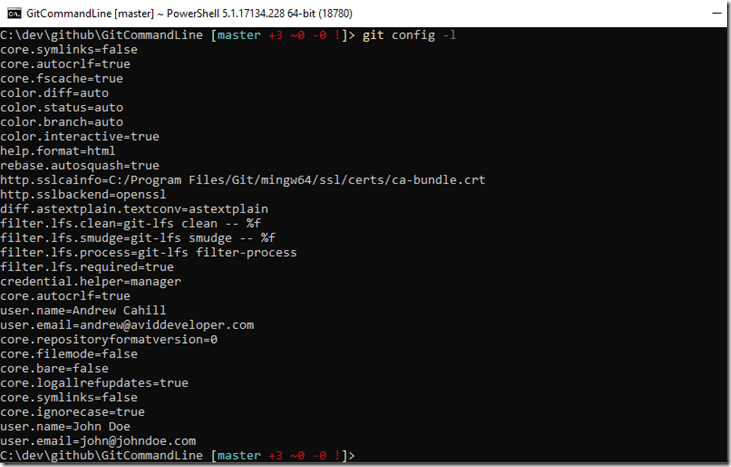 and it looks like they did as you can see near the bottom.

Let’s call a Git status to see the current changes in our repository.

What this is telling us is that we have not specified any files to be included in the next commit.

As mentioned above we can either call a Git add as a separate command or within the commit command, let’s call it separately for now.

Here we specify what is to be added to staging, we are adding everything with ‘git add .’ we could have specified individual files if we wanted to.

You will now see the output is different – stating we have new files ready to be committed.

Let’s go ahead and commit them, we will add a message to our commit let’s call it ‘Initial commit’

Now we will want to push our local repository changes to our remote repository (GitHub).

FYI: I have already created a new repository in my GitHub account(https://github.com/andrewcahill/GitCommandLine).

In order to push I will need to specify my remote repository details, specifically where it is located so I use the below command.

Now we will issue a push command with ‘git push -u origin master’.

Great, now we have our repository in GitHub.

Now let’s create a new development branch, make some changes in this new branch then push them to GitHub and then finally merge these changes to master.

I will make a minor change to our Program.cs file and change the “Hello world!” output to “Hello GitHub!”

Quick tip: To view content of a file there is a PowerShell command ‘Get-Content’ which will allow you to do exactly that.

We can use this to view a before and after, like below..

And after the change..

Now let’s commit them, why not this time add our ‘add’ command within our commit command and add the message “Updated output”.

Now let’s push our changes to a new remote ‘development’ branch. In order to do this we will want to create our new remote branch by issuing the command ‘git push –set-upstream origin development’

Note this is only a one-time operation

Now let’s merge these development changes to master so both are in sync.

This is a two-step process first lets checkout or switch to our master branch then we will call merge – like below.

Now we can see the master branch has an update pending so let’s push this change to our remote repository.

All we really need to do is clone down this repository, to a directory of our choosing, make the changes and push them back up.

I will create a new folder under my github directory called ‘GitCommandLineContributor’.

Now as a contributor lets make another change to the Program.cs file –> we will change from “Hello GitHub” to “Hello from contributor”.

Okay, now let’s go ahead and commit and push as before.

Now go back to our owner viewpoint(c:\dev\github\gitcommandline) in my case, switch to development and pull down any changes that may have happened by contributors by issuing ‘git pull‘.

And we see after we perform a pull we can see new changes being applied.

So we issue ‘git checkout master’ & ‘git merge development’ and finally ‘git push’ as before.

At any point you can run a ‘git –help’ command which lists all the available git commands available to run. As well as that you can run a ;git [command] –help; to bring up a webpage detailing further information on that specific command. For example ‘git commit –help’ –> pretty cool.

Finally one last command I wanted to show was the Git Stash command, as I have on more than one occasion forgotten to switch to the correct branch before making changes, for example accidentally making changes on master instead of development – this command really helps me out. As I usually try to make my commits small and often I had previously ended up simply copying my changes to the new branch –> a pain and error prone.

How I will show it is:

As an example we accidentally make a change to master that we wanted to make to development so we stash these changes, switch to the correct branch(development) and apply the changes to the development branch.

Lets again make a change to our Program.cs file with “Hello owner!” in our output.

Now we realize this change should have been in development, so, lets stash these changes. 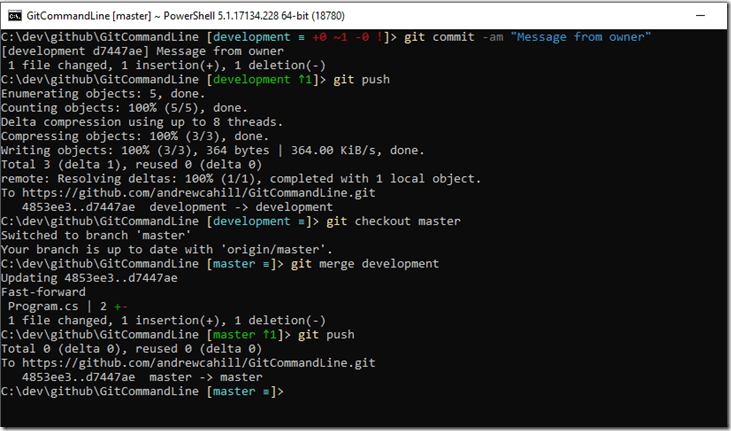 That’s it a top to bottom of all my frequent Git commands, I hope somebody may find this overview useful.

Git - How to fix a bad commit

Andrew Cahill
Andrew Cahill is a software developer/architect/CTO writing software since 2002 & professionally since 2009. Working in startups to fortune 100 companies in Europe, the US and the Middle East.
Are We Really Doing Continuous Integration?
#git #devops #opensource
Adding Tiered Compilation in .Net Core 2.1
#netcore