Let me explain through a example:

When you make a commit and push sources to Git SCM(Source Code Management like Github, GitLab etc), then automatic builds and tests are run with the latest changes, this is knows as Continous Integration

With Continous Delivery, code changes are automatically built, tested, and prepared for a release to production. Continuous delivery expands upon continuous integration by deploying all code changes to a testing environment and put on a manual approval for adding them in production envirment.

Continous Deployment expands upon continuous delivery and pushed to production environment automatically without any approval.

What is Pipeline and MultiBranch Pipeline?

Jenkins is an open source automation server.
The Jenkins project was started in 2004 (originally called Hudson) by Kohsuke Kawaguchi, while he worked for Sun Microsystems. It was mainly developed for Continuous Integration, but in recent days, Jenkins orchestrates the entire software delivery pipeline — called continuous delivery and Continuous Deployment (CD). Presently, it is among one of the most popular Devops tools.

Docker is a tool designed to make it easier to create, deploy, and run applications by using containers. Containers allow a developer to package up an application with all of the parts it needs, such as libraries and other dependencies, and deploy it as one package. By doing so, thanks to the container, the developer can rest assured that the application will run on any other Linux machine regardless of any customized settings that machine might have that could differ from the machine used for writing and testing the code.

It is a tool that is designed to benefit both developers and system administrators, making it a part of many DevOps (developers + operations) toolchains. For developers, it means that they can focus on writing code without worrying about the system that it will ultimately be running on. It also allows them to get a head start by using one of thousands of programs already designed to run in a Docker container as a part of their application. For operations staff, Docker gives flexibility and potentially reduces the number of systems needed because of its small footprint and lower overhead.
Here, we will be integrating Docker with Jenkins.

and add the following line in the bottom of file:


* You will need to get the token from

and copy the text and paste that on Jenkins webpage.

Enter Secret as your Personal Access Token which you created earlier.

Enter same ID if you are going to use my Jenkinsfile from this project or edit the ID in the Jenkinsfile acccordingly.

Enter same ID if you are going to use my Jenkinsfile from this project or edit the ID in the Jenkinsfile acccordingly.

Well, Jenkinsfile is the ultimate pipeline file through which Jenkins will automatically detect the whole automation process and follow the steps mentioned in it. 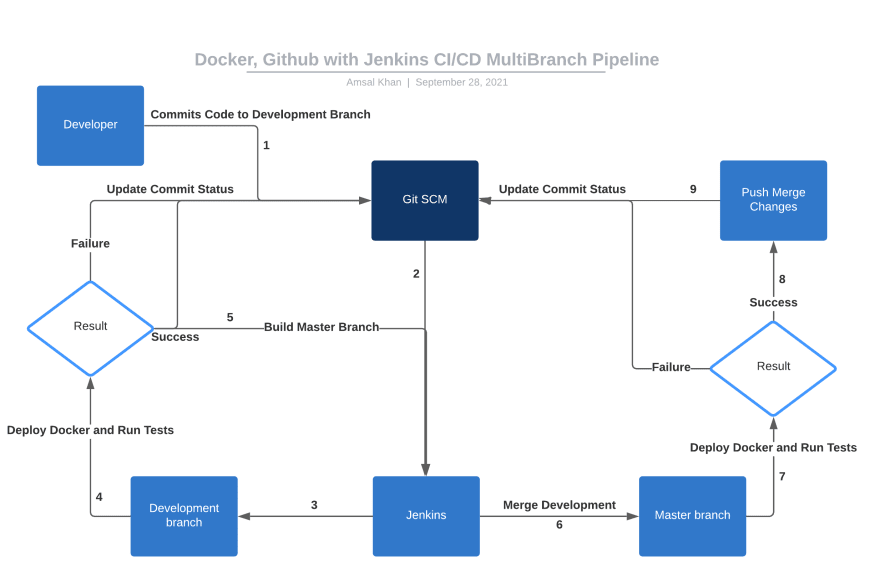 Replace my git repo url with yours throughout the file. Also change UserIdentity block with your GitHub Details in class GitSCM of Code Checkout

Push this modified Jenkinsfile to your both branches in your repo. It would be better if you add it in master branch and create dev branch using that but you may only do this on a new repo. For a older repo, you may need to use combinations of few git commands including git reset, git rebase, git checkout and git branch. Text me if you face any diffcuilties😄

Also remember, I am using master and dev branch. If you're using any any other branch instead of 'dev' then, make changes accordingly in Jenkinsfile.

Select and set Credentials and set your repo name.

How to Set up Facebook Conversion API on Shopify

How to deal with slow Docker performance on M1/M2 Mac?

Getting Rid of QA Engineers is a Mistake

Once suspended, amsal will not be able to comment or publish posts until their suspension is removed.

Once unsuspended, amsal will be able to comment and publish posts again.

Once unpublished, all posts by amsal will become hidden and only accessible to themselves.

If amsal is not suspended, they can still re-publish their posts from their dashboard.

Once unpublished, this post will become invisible to the public and only accessible to Amsal Khan.

Thanks for keeping DEV Community 👩‍💻👨‍💻 safe. Here is what you can do to flag amsal:

Unflagging amsal will restore default visibility to their posts.