In my last post, we explored a contrastive learning approach to zero-shot text classification. In this post, we will explore a different approach based on text generation. This approach was proposed by Puri et al. in their paper “Zero-shot Text Classification With Generative Language Models”. The paper was also presented in the "3rd Workshop on Meta-Learning" at NeurIPS 2019.

Build a text classification model that can classify classes on a new dataset it was never trained on.

In the paper, the authors reformulate text classification as a text generation problem. Instead of classifying a text into X classes, the model needs to generate the correct class when given a text and the classes in a multiple-choice question answering format. Both the input and the output of the model are in natural language.

Let's understand how the authors implemented this idea in a step-by-step process:

As seen in the formulation above, we need to teach GPT-2 to pick the correct class when given the problem as a multiple-choice problem. The authors teach GPT-2 to do this by fine-tuning on a simple pre-training task called title prediction.

In the original GPT-2 paper, the training data was prepared by scraping outbound web links that were submitted or commented on Reddit and had a minimum of 3 karma score.

In the current paper, the authors build upon this idea with the OpenWebText dataset. Since we can know the subreddit the link was posted in and the submission title the user used, this metadata can be collected and used as the supervision signal. 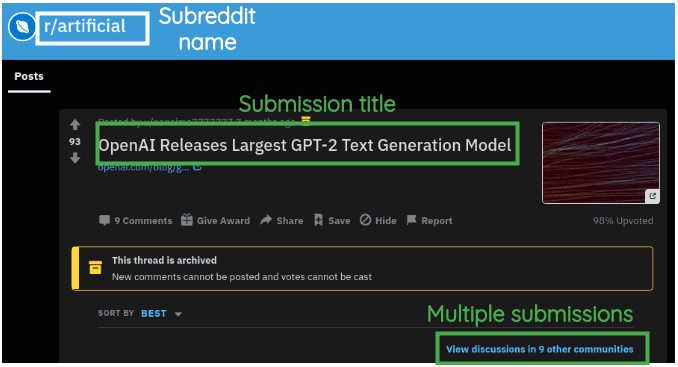 The authors found subreddit prediction didn't generalize well and so they use submission title in their experiments.

To feed the annotated data into GPT-2, the authors prepared 26 different multiple-choice question format. A random question format is sampled during training.

Now for each document, we randomly choose between 2 to 15 titles. One title is correct for that document while all others are random titles.

As shown below, the titles are placed after the question as a comma-separated list.

The question is prepended to the document to simulate a multiple-choice question answering task and a pre-trained GPT-2 language model is fine-tuned on this dataset to learn the submission title prediction task.

From the previous step, we have a model that has been trained on a wide variety of titles from the web and thus simulates meta-learning with N-way text classification tasks.

To test the zero-shot capabilities of the model, the authors tested it on 6 benchmark datasets without doing any finetuning.

For each dataset, they perform the following steps:

Even without access to the training data, the model was able to achieve up to 45% improvement in classification accuracy over random and majority class baselines.

The paper provides a good overview of the method and challenges of using generative language models for zero-shot classification and show that natural language could be a promising meta-learning strategy for text problems.

How to Analyse & Clean Text Data in Python