To be honest, I am tired of counter-app examples.

I had to step on and write this article to demonstrate to react beginners a real use case of useReducer() because I am sure you are tired of the counter app examples too. No?

In this article, we'll discuss what is useReducer(), its syntax, and implement it to create an effect of a well-known website (spoiler, it's Pinterest).

Prerequisite? Basic ReactJS and to know what is "state". Are you familiar with Redux or not? It doesn't matter. Optionally, it's good to know the reduce() method. Here's a small post that explains it in a nutshell.

So this article is for beginners who are into React hooks.

Before we proceed I would like to state that I am jobless for the moment and I am looking for a remote frontend job position. How can you help? Refer my portfolio to someone who's looking for a frontend developer, less than that, you can share my article.

Thank you and let's go.

We import useReducer, then we have the initialState which is the default value of the state.

Also, the reducer function takes two arguments: The state and an action and contains a switch statement.

In case the action is 'toClick' we will do something to the state and return it. But where? Now comes the hook itself.

The useReducer() hook itself takes two arguments: the reducer function and the initial state of which we defined before.

The useReducer() takes the initailState and passes it to the reducer function through the state argument and whatever it returns, it saves it inside the actualState.

In programming, everything is confusing until explained with a real example. 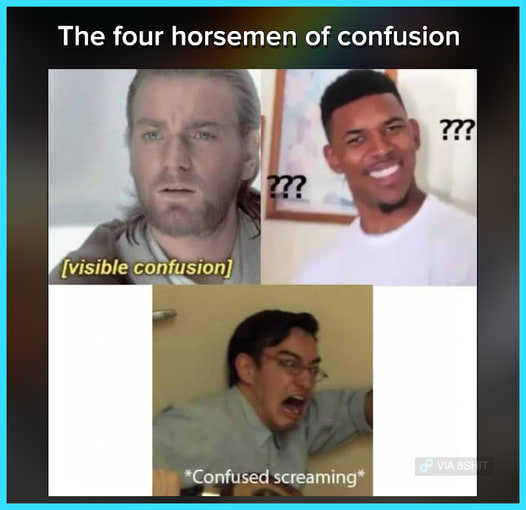 A Real use case.

So I decided to work on a Pinterest clone. It turns out that the home page has this effect where four buttons represents four themes.

So I have four buttons and each click changes the state of four elements:

The default text is "Weeknight dinner" so I created a theme named dinner with the color of darkYello, so my initial state is going to be an object with three states: The color, the text, and the theme.

Next is the dispatcher:

It acts like the usual setState but instead, it sets an action.

Here, we have four buttons, each one has a dispatch function with an action as an object which contains the action's type. 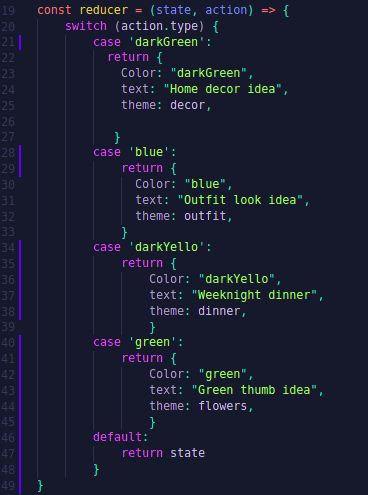 It takes two arguments: the state and the action.

We defined a switch statement because we have multiple actions. So, in case the user clicked on the button with the dispatcher green, the case green will be triggered and change the state of Color, text, and theme.

It takes the reducer function defined earlier and the initial state and returns an array. The returned array contains an object of the states: text, theme, and color, not to forget the dispatch method.

Here's how I am implementing it in the JSX.

PS: I am using TailwindCSS.

And for the title.

I am just placing the state text and if's null it will display "Weeknight dinner" as a default value.

The user will click on a button and the dispatch function will be triggered with an action, The reducer function will take that action plus the current state (if it's the first time, then it will take the initial state) and compare the action's type with all the cases, if one is found it will do the logic and assign the result to the states defined in the useReducer() hook, if no, it will return a state or throw an exception.

Well! yes, but actually no.

It's time for you to practice. If you have a dummy react project that uses useState, try it to replace it with useReducer.

The goal was to make you understand the useReducer() hook without using the counter app example.

I hope that you enjoyed the article and if so, please don't forget to share it. Also, feel free to add a comment if you see that I forgot to mention something important.