There has always been a discussion about which Android architectural pattern to use. You had the impression that something was wrong with the way things were set up from the beginning. Many people then experienced difficulty with architecture in general as a result of this.
However, writing applications in a clean manner has been discussed for a while.
Understanding the concept behind the Clean architecture and why it's a good solution for the majority of issues we encounter today as programmers is very instructive because it can be used in any application and platform, not just Android. 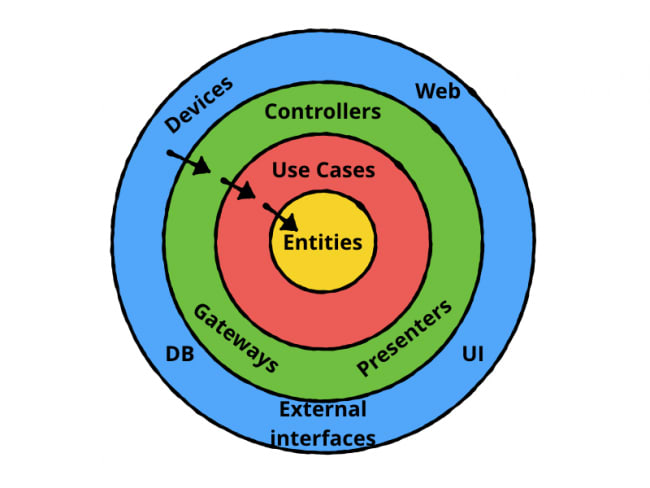 Like other software design philosophies, clean architecture seeks to offer a practical method for creating high-quality code that performs better, is simpler to change, and has fewer dependencies.
The rings up top stand for the various software tiers in your app. Two important considerations must be kept in mind before continuing:

The most concrete ring is on the outside, and the most abstract ring is in the middle. The Abstraction Principle states that implementation details should be in the outer rings while business logic should be in the inner rings.
Another principle of Clean Architecture is the Dependency Rule. According to this rule, each circle can only rely on the inner circle that is closest to it, allowing the architecture to work.

A software design framework called Model-View-ViewModel (MVVM) distinguishes between program logic and user interface elements. In 2005, it was unveiled by John Gossman and Ken Cooper, two well-known Microsoft architects. In addition, MVVM is also referred to as a model-view-binder. The MVVM design pattern, like many others, aids in code organization and program module separation, enabling quicker and simpler code development, updating, and reuse. Windows and web graphics presentation software frequently use this design. The MVVM design is used by the Windows Presentation Foundation (WPF), which utilizes Microsoft's.NET platform. Silverlight, a multimedia plug-in that runs on the internet and is similar to Microsoft's WPF, also uses MVVM.

Using MVVM, your view—that is, your activity and fragments—is separated from your business logic. MVVM is adequate for small projects, but as your codebase gets bigger, your viewmodels start to bloat, and it gets difficult to divide responsibilities. In these situations, MVVM with Clean Architecture is a good option. It goes a step further in clearly defining the roles in your code base. Your app's actions have abstracted logic that makes them unintelligible. The Model-View-Presenter (MVP) architecture and Clean Architecture can now work together. As a result, we're choosing MVVM over MVP because Android Architecture Components already comes with a built-in ViewModel class, eliminating the need for an MVVM framework.

The Advantage of Clean Architecture

Different people have different ideas about how many levels Clean Architecture should have. The design does not specify separate layers but instead lays the groundwork. The idea is that you can change the number of layers based on your requirements. Here, we'll use five to keep things succinct; take a look at them.

How to get web development clients ???

Once suspended, amenya will not be able to comment or publish posts until their suspension is removed.

Once unsuspended, amenya will be able to comment and publish posts again.

Once unpublished, all posts by amenya will become hidden and only accessible to themselves.

If amenya is not suspended, they can still re-publish their posts from their dashboard.

Once unpublished, this post will become invisible to the public and only accessible to Zaccheaus Amenya.

Thanks for keeping DEV Community safe. Here is what you can do to flag amenya:

Unflagging amenya will restore default visibility to their posts.