Protein folding problem is a 50-year-old problem that has not been solved by the scientific community. A protein’s shape is closely linked with its function, and the ability to predict this structure unlocks a greater understanding of what it does and how it works. Many of the world’s greatest challenges, like developing treatments for diseases or finding enzymes that break down industrial waste, are fundamentally tied to proteins and the role they play.

Proteins are essential to life, supporting practically all its functions. They are large complex molecules, made up of chains of amino acids, and what a protein does largely depends on its unique 3D structure. Figuring out what shapes proteins fold into is known as the “protein folding problem”, and has stood as a grand challenge in biology for the past 50 years.

"We have been stuck on this one problem – how do proteins fold up – for nearly 50 years. To see DeepMind produce a solution for this, having worked personally on this problem for so long and after so many stops and starts, wondering if we’d ever get there, is a very special moment."

CO-FOUNDER AND CHAIR OF CASP, UNIVERSITY OF MARYLAND

This has been a focus of intensive scientific research for many years, using a variety of experimental techniques to examine and determine protein structures, such as nuclear magnetic resonance and X-ray crystallography. These techniques, as well as newer methods like cryo-electron microscopy, depend on extensive trial and error, which can take years of painstaking and laborious work per structure, and require the use of multi-million dollars. 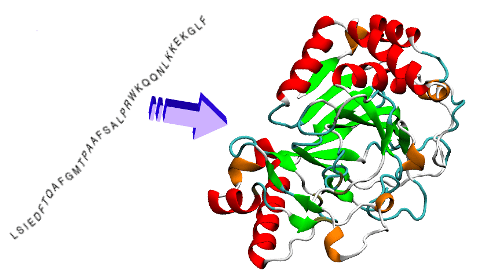 In his acceptance speech for the 1972 Nobel Prize in Chemistry, Christian Anfinsen famously postulated that, in theory, a protein’s amino acid sequence should fully determine its structure. His hypothesis sparked a five-decade quest to be able to computationally predict a protein’s 3D structure based solely on its amino acid sequence as a complementary alternative to these expensive and time consuming experimental methods. A major challenge, however, is that the number of ways a protein could theoretically fold before settling into its final 3D structure is astronomical.

In 1969 Cyrus Levinthal noted that it would take longer than the age of the known universe to enumerate all possible configurations of a typical protein by brute force calculation – Levinthal estimated 10^300 possible conformations for a typical protein. Yet in nature, proteins fold spontaneously, some within milliseconds – a dichotomy sometimes referred to as Levinthal’s paradox.

AlphaFold has been able to solve this problem with a high degree of precision and with great speed. To know about the details of the AI system Alphafold visit this link. This can help in discovery of drugs at a faster pace. In the present time it can be a very great invention to help the discovery of COVID-19 vaccine. It can help predict the 3D model of the SARS-Cov2 virus more accurately and then find and vaccine much more efficient.

Our Favorite Machine Learning Courses On Coursera For Free

How to Remember Pandas Index Methods