I was studying Object Oriented Programming concepts last week and I decided to share a sum up about one of them: inheritance.

Inheritance allows classes to share their attributes, methods and functionalities to other classes. So in order to link those classes inheritance adopts a hierarchical schema relationship.

And why is that relevant?

Inheritance then makes it possible to create an increasingly specialized hierarchical structure of classes. The big advantage of this is not having to start from scratch to specialize an existing class. The child class should be a specific implementation of unique attributes/methods/functionalities from a more generic class that shares similarities.  So let’s go to a Python example.

Let’s say we create a class called Person which has the first_name and last_name as attributes. That would cover a generic situation if we assume all people are likely to have a first name and a last name, right? Proceeding from that we also create a class called Employee. We can say all employees are also persons so we will make our Employee class inherits the Person class attributes and methods, so the Person class will become Employee’s parent class.  If we go a little further we also could create a class called, for example, Developer. And for our example we will assume that all developers are also employees so that they will inherit attributes and methods from its parent class (which in this case is the Employee class). So we could write something like this: 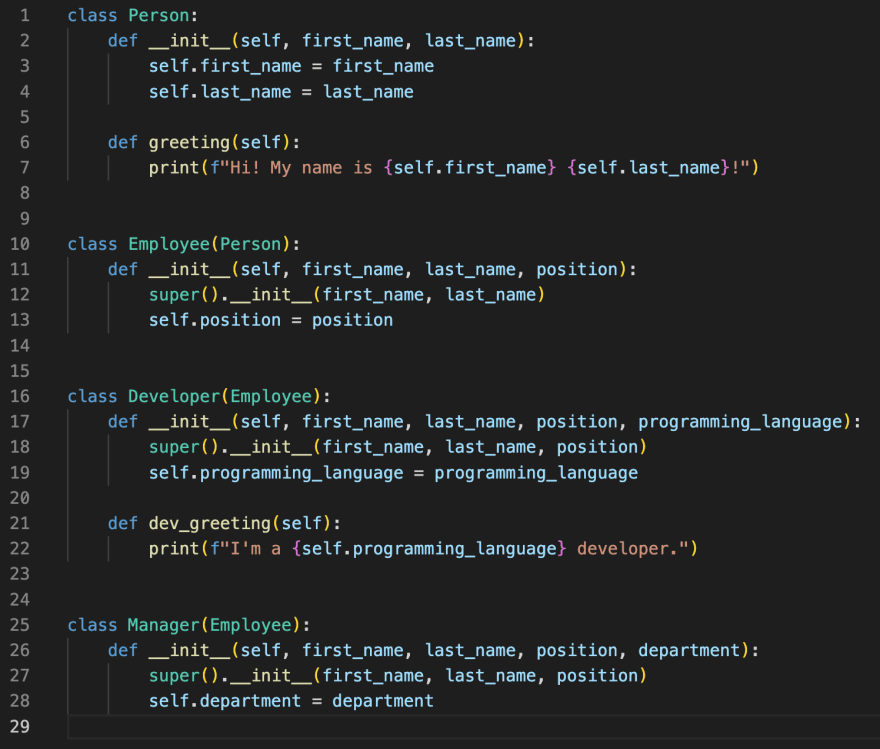 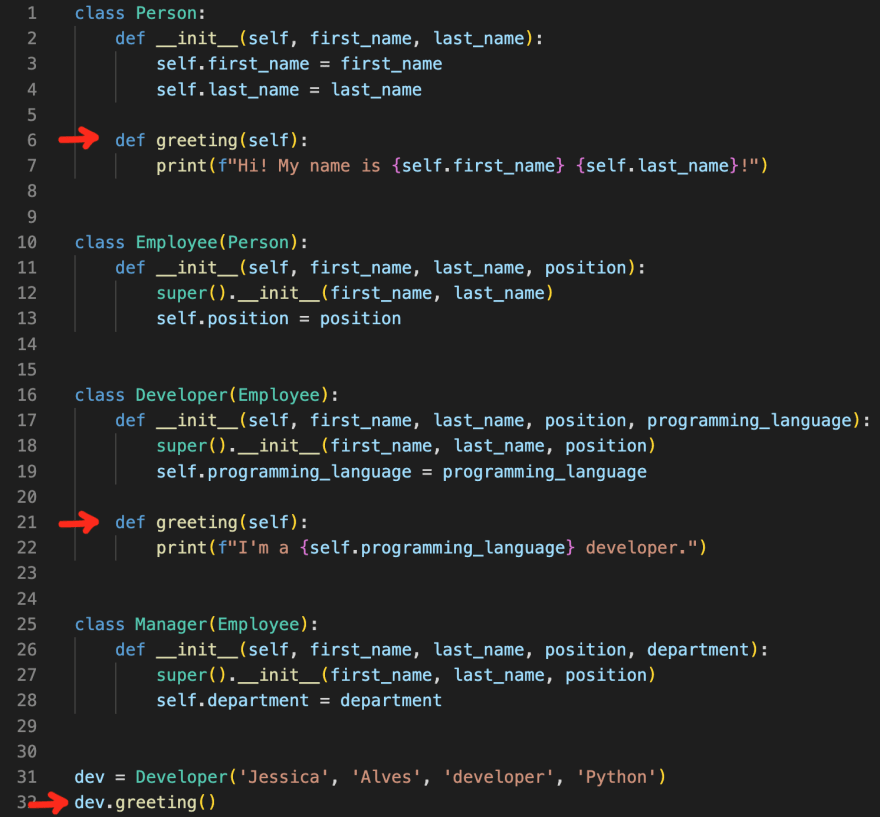 We could also add something else to the existing greeting method, printing out the greeting from the parent class plus our specific greeting for the Developer class. Like this: 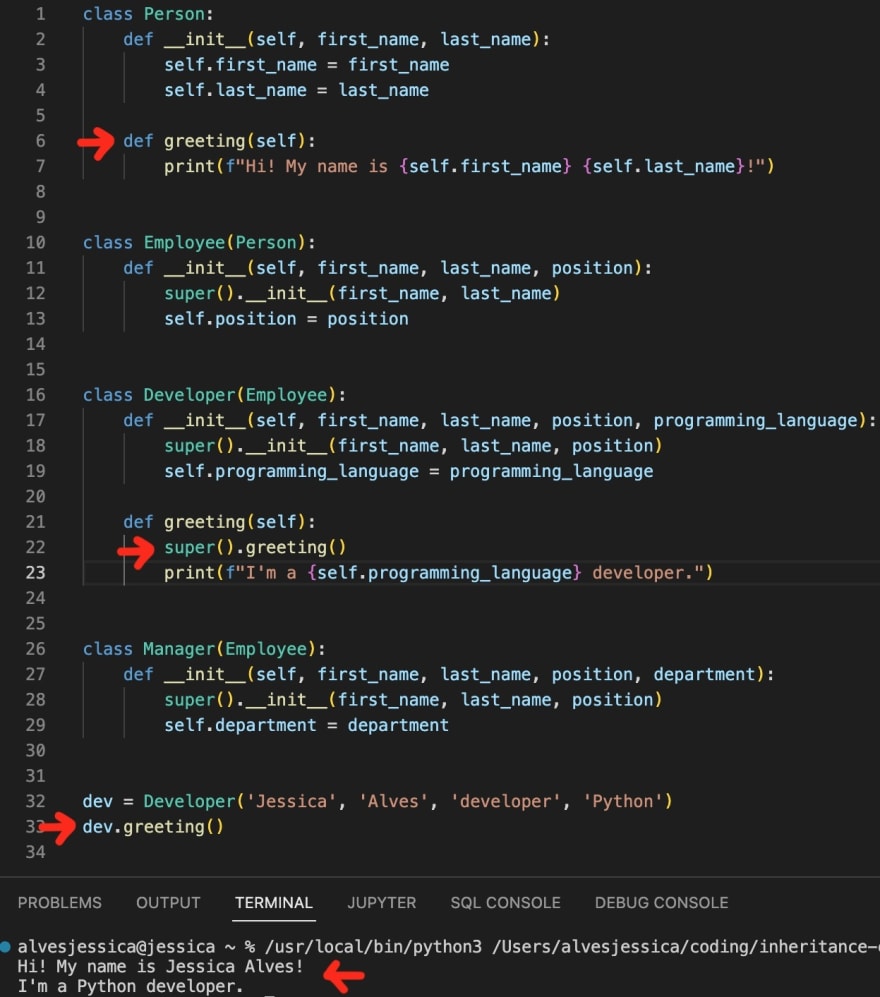 In Python you will find multiple inheritance which means a child class can have more than one parent class and it will inherit all the methods and attributes of all its parent classes. See the example below: 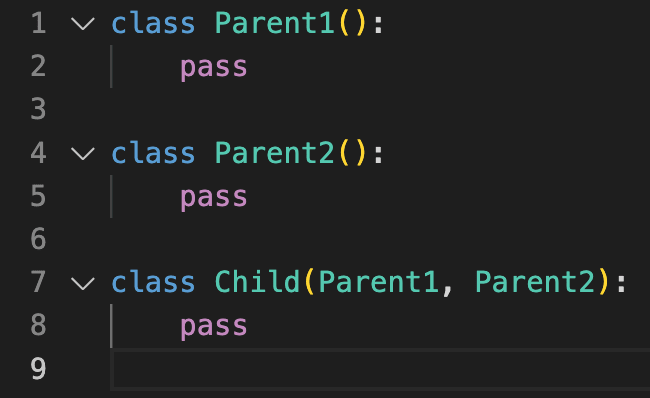 It’s also relevant to mention that when using the super keyword and referencing any methods from the parent classes in the child class you will notice a behaviour called Method Resolution Order (MRO).  For example, let’s say you use the super keyword to reference a method from one of the parent classes in the child class and create an instance of this last one. The instance methods, including the init method, will be executed based on the order defined by the classes inheritance as shown in the example below: 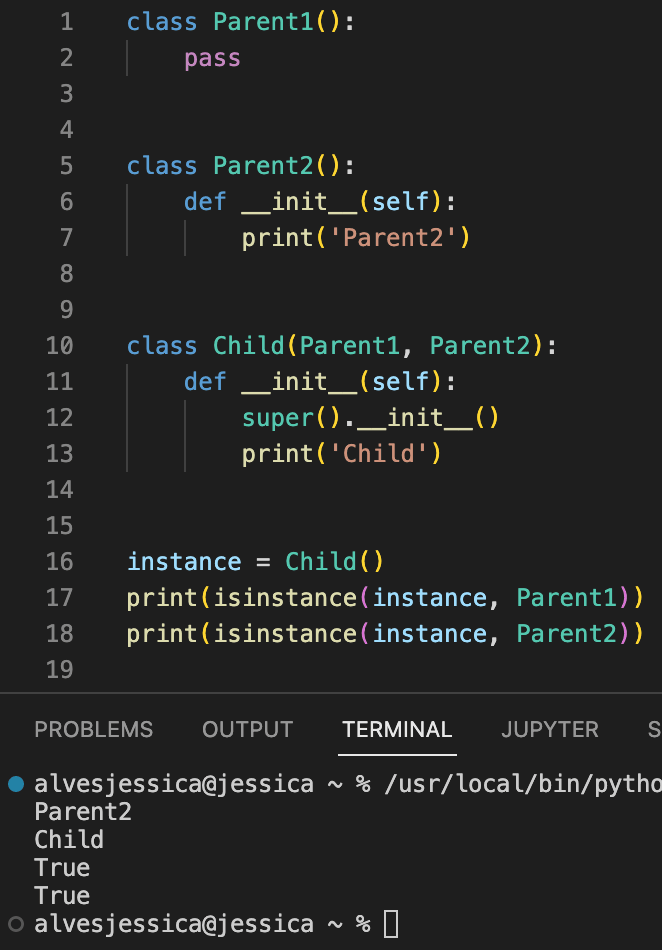 This behaviour can be really confusing depending on the complexity your code reaches. In other programming languages such as Java you're not allowed to use multiple inheritance in order to avoid possible runtime errors (like duck typing examples in Python). Things like inheriting from multiple classes that declare a method with the same name but with different signatures can be really confusing and complex to deal with if you don't track them properly. Which can also demand a lot of work and raise confusing runtime errors that are hard to deal with.

7 tips to improve your coding skills

Once suspended, alvesjessica will not be able to comment or publish posts until their suspension is removed.

Once unsuspended, alvesjessica will be able to comment and publish posts again.

Once unpublished, all posts by alvesjessica will become hidden and only accessible to themselves.

If alvesjessica is not suspended, they can still re-publish their posts from their dashboard.

Once unpublished, this post will become invisible to the public and only accessible to Jessica Alves.

Thanks for keeping DEV Community 👩‍💻👨‍💻 safe. Here is what you can do to flag alvesjessica:

Unflagging alvesjessica will restore default visibility to their posts.