Docker simplified - its definition, benefits, Architecture and a quick demo of how easy it is to use

For a long time, Software Development has been isolated from Software Deployment, Maintenance and Operations.

However, with the advent of Docker, Developers now have an easy way to learn about deployment, configuration and operation, giving rise to what we today know as DevOps - one of the most sought after and well paid roles in the industry.

Docker Containers have also helped spark many industry trends in technology which are now considered standards, some of which include: automated CI/CD Pipelines, Microservices, Serverless architectures etc. just to name a few.

But what actually is Docker anyway!?!

Docker is a platform that allows us to package our applications into deployable executables - called containers, with all its necessary OS libraries and dependencies.

This basically means we can separate our applications from the underlying infrastructure/hardware being used - enabling rapid development, testing and deployment.

"Now what the heck is Virtualization" you ask? It might sound like a daunting topic, and it can definitely get quite complex.

Lucky for you, I have written an entire blog on Virtualization - aiming to make it as simple as possible. I highly recommend you go though it first before continuing.

What is Virtualization? | Bare Metal vs Virtual Machines vs Containers

Just in case you're in a hurry or need a refresher, I'll summarize -

Virtualization is the technology that allows us to create & manage virtual resources that are isolated from the underlying hardware.

It is what powers Cloud Computing, and is utilized by almost every production systems of today.

The main benefits of Virtualization are:

There are several types of Virtualization, among which Virtual Machines (VMs) and Containers are the most relevant to our discussion.

Alright, with this in mind, we can now ask…

The main differentiating factor of (Docker) Containers vs Virtual Machines is the fact that Containers virtualize just the operating system, instead of virtualizing the the entire physical machine like VMs.

This means that Containers themselves do not include an entire Guest OS, making them substantially lighter, faster, more portable and flexible than it's alternative.

Docker itself provides the platform and tooling to manage the entire lifecycle of Containers.

To better understand why Docker is so widely adopted and is worth learning, let's look at -

The main benefits of Docker:

Even though containers are awesome, they are not the one size fits all solution.

Since several containers run on the same host machine and do not virtualize the hardware, they provide a lower level of isolation when compared to VMs. This could give rise to security or compliance issues in some niche projects, which might be an important consideration.

But that is not an issue for most projects, so… chill out!

Okay, now for the most exciting part… 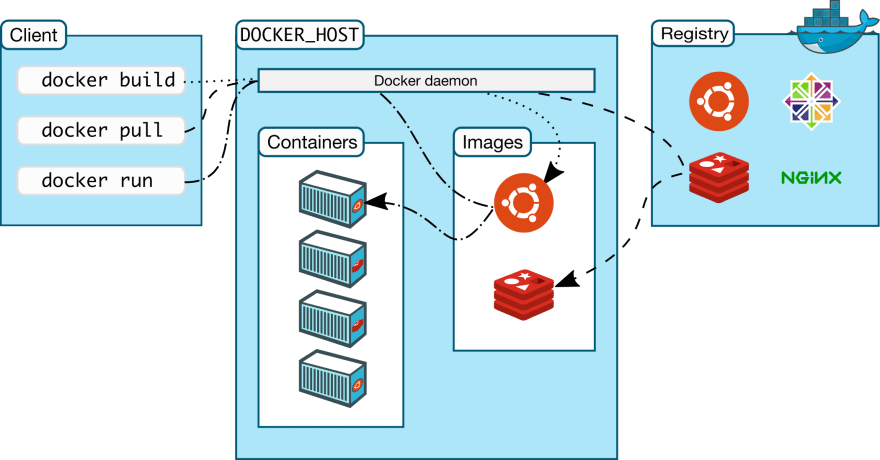 To understand Docker, we need to know about the following concepts:

The main Docker Workflow is as follows:

Suppose you have Docker installed on your system. Now, to run a Redis Container, for example, just open up your terminal and execute:

"Wait what? You have Redis running in just 3 words!?!"

Yup, that's how simple it is!

When you run the command, Docker performs these steps:

This was just an example. You can similarly run many other verified & official pre-built Images like MySQL, Ubuntu, Nginx, Apache Server etc. just to name a few.

You can also build your own Image by extending from existing ones; i.e. add your own code in your desired language, libraries or frameworks, and configure them as you like.

But let's keep it simple for this first blog of this series. In the upcoming ones, we shall get more hands on with Docker!

By simplifying virtualization, Docker has made containers the de-facto standard of today's modern software teams. It also allowed developers who were once afraid of operations, to now, manage and automate it instead.

It is no doubt that anyone in the IT industry will benefit from learning about Docker and Containers.

So, let's continue to learn more about Docker together!

In the next blog in this series, we'll learn more about how Images work, how to use them properly and build your own custom Images using a Dockerfile.

Docker Made Easy #2 is coming soon… so keep and eye (and notification) out. ;)

I would suggest you to install Docker on your system and start getting your hands dirty in case you haven't already done so.

Till then, keep learning!

How to Secure Your Data Lake?

All you need to know about Terraform provisioners and why you should avoid them.