Learn what the None driver is, how it enables network isolation, how to use it, and possible use cases

What is the none network driver in Docker and how can it help me run secure, network-isolated containers?

This blog will try to answer that as simply as possible.

This blog is the fourth one in a series for Docker Networking.

Here’s the agenda for this blog:

Let’s start with a quick refresher: what are network drivers?

Network drivers enable us to easily use multiple types of networks for containers and hide the complexity required for network implementations.

What is the none network driver?

The none driver simply disables networking for a container, making it isolated from other containers. 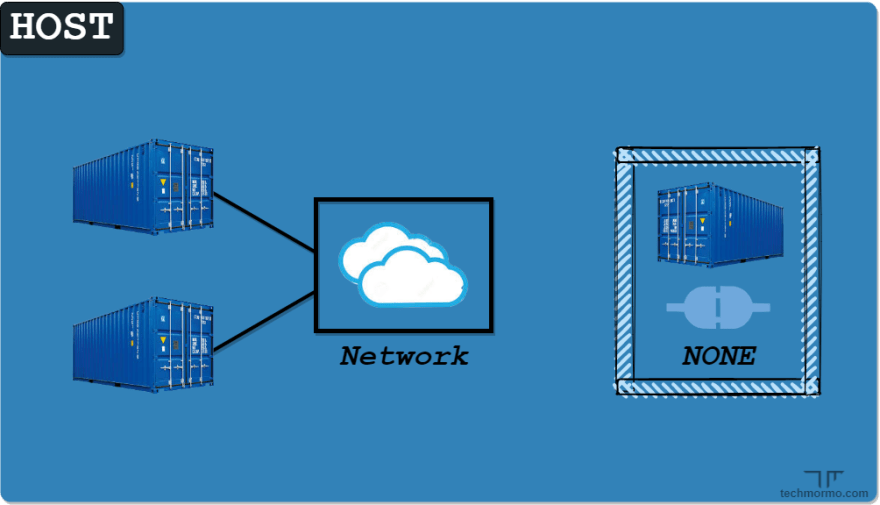 Within the container, only the loopback interface is created to enable inter-process-communication, by using the IP address 127.0.0.1 mapping to the name localhost.

This makes the none network driver very secure. But it also limits its usability, as we usually wish to enable communication between containers.

We’ll later look at some possible use cases for none.

How to use the none network driver?

NOTE: the -it flags connect your terminal’s input to the container’s one, giving you direct access to the shell running inside the container.

Docker uses the default bridge network driver if no driver is stated, which we will learn more about in an upcoming post.

But the important thing to note is that this container has access to the internet.

We can check that by pinging a web address like google.com:

or by running the apk update command:

We can check the network interfaces and IP addresses by using:

This shows detailed configurations for each network interface.

NOTE: On some systems, additional tunnel interfaces (like tunl0) might show up; we can ignore them for now.

We can also check the presence of a route table that has a default route to a gateway:

All this was a way to confirm the presence of network connectivity. Don’t worry if you didn’t understand every single detail.

Now let’s see how a container with the none driver behaves.

Let’s open up a new terminal tab/window and run a very similar container like before. This time we will specify the network to be none and name it app2.

If we try to ping localhost, it will surprisingly work:

This is because the loopback interface is present, as you can check with:

But you will notice that there are no ethernet interfaces.

As well as no routes:

Thus, neither can app2 be reached from the outside nor vice versa.

The only way we can connect to app2 is by using the docker exec command, which is used to run a command inside a running container.

Open up a third terminal tab/window and run the following:

This will show the list of interfaces and IP addresses of app2 we had seen earlier.

If you want to start another interactive session, you can run another shell (sh) and use -it with exec:

To exit the shell, use ctrl+d or (control+d).

Once we are done playing around, we can clean up the containers using:

When to use the none network driver? - possible use cases

While I personally haven’t used the none driver in production much during the several years that I have been exposed to containers, it might still be useful for cases that require strict network isolation.

I could think of two niche use cases:

According to the documentation, none may also be used in conjunction with a custom network driver.

Do you know of any other important use cases that I am missing? Please let me know as I’d love to add them here.

In this blog, we learnt about the none network driver in docker - what it is, how to use it, and some possible use cases.

By enabling network isolation, the none driver offers a secure environment for running processes. But it also limits its usability.

In the next blog, we will learn about the host driver - which provides the best network performance out of all 4 drivers! ⚡️

Thanks for making it so far! 👏

How to Easily Deploy a Spring Boot Application on AWS Fargate

This is Exciting: A New Destination for All Things DevOps

Build a PostgreSQL Docker image with pg_hint_plan and pg_stat_statements

Once suspended, alubhorta will not be able to comment or publish posts until their suspension is removed.

Once unsuspended, alubhorta will be able to comment and publish posts again.

Once unpublished, all posts by alubhorta will become hidden and only accessible to themselves.

If alubhorta is not suspended, they can still re-publish their posts from their dashboard.