Learn what the Host driver is, how it provides the best performance, how to use it, possible use cases and limitations

What is the host network driver in Docker and how does it provide the best network performance?

This blog will try to answer that (and more) as simply as possible.

This blog is the fifth one in a series for Docker Networking.

Here’s the agenda for this blog:

Here are some quick reminders:

What is the host driver?

When a container uses the host network driver, the container shares the network stack (namespace) of its host. 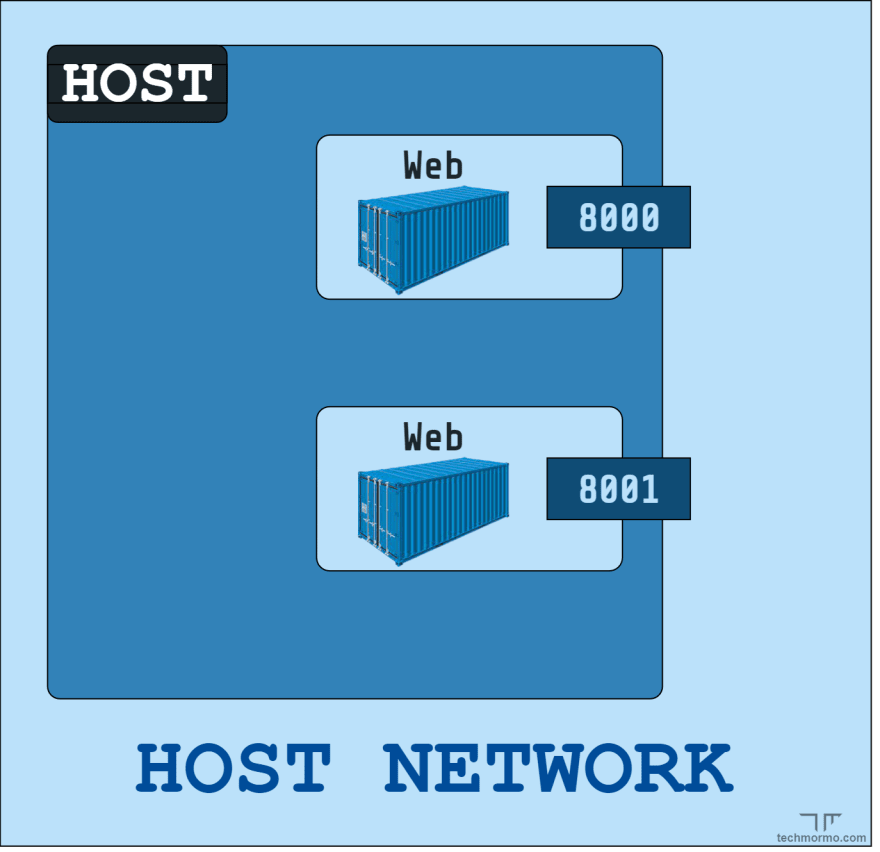 This means the network of the container is not virtualized, making the container appear as if it is the host itself, from a networking perspective.

A direct consequence of this is that - if a container using the host driver publishes a port, let’s say 8000, then that port will also be published on the host machine. If that port is already in use, then the container will not start successfully.

However, in all other ways - like storage, process, and user namespace, the container is isolated from the host.

How to use the host driver?

Let’s start off by running an nginx container named app1 in the background (-d) without specifying any network:

The nginx container by default maps onto port 80 inside the container. Docker uses the default bridge network driver if no driver is specified.

If we use curl localhost inside the container, we’ll see nginx the nginx index page successfully:

But if we try to curl localhost from the host machine, it will fail:

This is because we cannot reach the nginx container from the host, as the host and the container are using separate network namespaces (when using the default bridge network).

The solution is port mapping.

We’ll learn more about bridge drivers in the next part of this series.

As we’d learnt, when using the host driver, the network stack is the same for both the container and host, so there’s no need for port mapping. Let’s check it out.

NOTE: you need a Linux machine to use the host driver.

Can you guess why?

The answer will be clear if we...

Let’s first look at IP addresses assigned to all network interfaces on the host machine:

Note the number of interfaces and the associated IPs.

What happens if we execute the same command inside the app1 container (the one using the default bridge driver)?

We should certainly see differences between the configuration in the host machine and app1, since they are using different network namespaces.

Now let’s try that for app2 container (the one using the host driver):

You’ll notice that the network configuration is exactly the same as for the host machine.

This is a clear indication that host driver makes the container share the host machines network.

One consequence of using the host driver is...

To demonstrate this, we’ll try to run a very similar nginx container to app2, but named as app3:

If we check the logs:

We’ll notice that nginx failed to start because the port it tried to bind to (80) was already in use.

We can confirm that app3 exited:

To end the hands-on lab, we’ll clean up the containers:

Now that we have seen it in action, let’s learn...

When to use the host driver? - possible use cases

The following are some use cases where the host driver could be suitable.

Given its properties in mind, we should be aware of the...

Limitations of the host driver

In this blog, we learnt about the host network driver in docker - what it is, how to use it, some possible use cases and its limitations.

By not providing network isolation, the host driver provides the best performance and simplicity. But its drawbacks are to be kept in mind when using the host driver in production.

I hope I could make things clearer for you, be it just a tiny bit.

In the next blog, we will learn about the bridge driver - the default network driver, that is likely used the most in development environments.

Thanks for making it so far! 👏

Once suspended, alubhorta will not be able to comment or publish posts until their suspension is removed.

Once unsuspended, alubhorta will be able to comment and publish posts again.

Once unpublished, all posts by alubhorta will become hidden and only accessible to themselves.

If alubhorta is not suspended, they can still re-publish their posts from their dashboard.