Understand the persistence issue with Containers, how Volumes and Bind mounts address them, how to manage them using the docker cli and some useful persistence topics

What the heck is a Docker Volume and why does it matter?

If you wanna know what that means or how, that's what we will discuss in this blog.

This blog is the fourth in a series of blogs and videos I call - Docker Made Easy.

I recommend going through the previous ones to help you get a more wholesome understanding of Docker.

Links to the previous blogs -

Alright. Here's a quick agenda for this blog:

Before we get into what volumes are, let's first try to understand what problem they address...

Containers by themselves are stateless or non-persistent - meaning, the data (state) they contain are lost when the container is re-created.

This is because containers only form a thin read/write layer on top of a specified Docker Image, which is removed when deleting the container. This is further discussed on the second Docker Made Easy blog - How Docker Images work.

This property makes containers super lightweight & portable and lets us scale them at will without having to worry much about their underlying storage.

But what if we are interested in keeping the container's data beyond its lifecycle, like in a stateful application? The classic examples are databases or key-value stores.

Suppose we need a MongoDB database for our application, so, we run a mongo container:

Now, if the container was removed (intentionally or unintentionally), we'd lose all data from our MongoDB database.

That is probably not what we want. We likely need to store the data in our database persistently, even if the container is lost.

So, how do we persist the container's data?

Mounting is a process by which an operating system makes files and directories on a storage device available for its users to access via a filesystem. 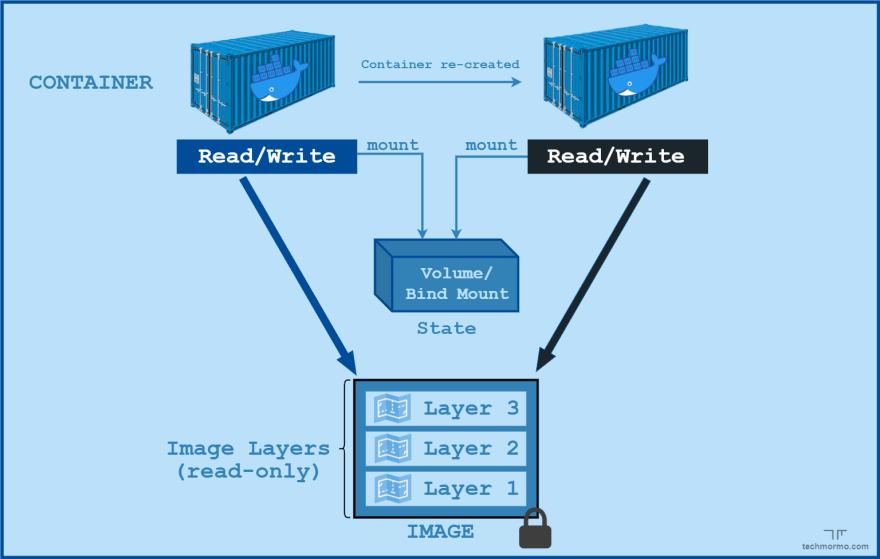 Now mounting might sound confusing if you're new to it. Thankfully, it's pretty straightforward in Docker.

There are two primary ways of mounting in Docker to achieve persistence:

An easy way to visualize the difference between volumes and bind mounts is to think about where the data lives on the Docker host.

Volumes can be of 2 types: anonymous and named.

Besides the name, both types of volumes behave exactly in the same ways. But named volumes are easier to deal with since you can refer to them using a human-readable name.

Docker claims that Volumes are the best way to persist container data. But why so?

Why Volumes are preferred over Bind mounts?

Even though bind mounts have been around since the early days of Docker, Volumes are the preferred form of persistence for most use cases today.

The following are the primary reasons for that -

Now that we know the WHY, let's look at the HOW...

How to manage volumes using the docker cli?

We can manage volumes through the docker cli directly (unlike bind mounts). The following commands show you how.

Volumes are only removed when you explicitly remove them, therefore, prune can be very useful in reclaiming unused device storage.

Let's look at how we can solve the MongoDB persistence issue we had discussed earlier, using bind mounts and volumes.

The idea is simple, we just need to mount (using -v) the container's file/directory which stores the database state, to a volume or bind mount. For the mongo image, this is the /data/db directory, as specified in the Docker hub documentation.

To use bind mounts, we specify the path on your host (/path/on/your/host) to be mapped to the /data/db directory inside the container -

Using anonymous volumes, you don't need to specify anything other than the container's mount file/directory -

Docker automatically creates a new volume with a random name the first time you run it.

And named volumes just require you to additionally specify the name of the volume, which in this case is mongo_data -

If the named volume doesn't exist locally, it will be created automatically.

Any of the 3 solutions above can enable persistence, although named volumes would be the most preferred as discussed previously.

Both volumes and bind mounts are read-write by default, meaning, containers can both read and modify the data that is mounted from the host.

Sometimes this might not be desired i.e. when we strictly need to give read access to the container(s) but not write. 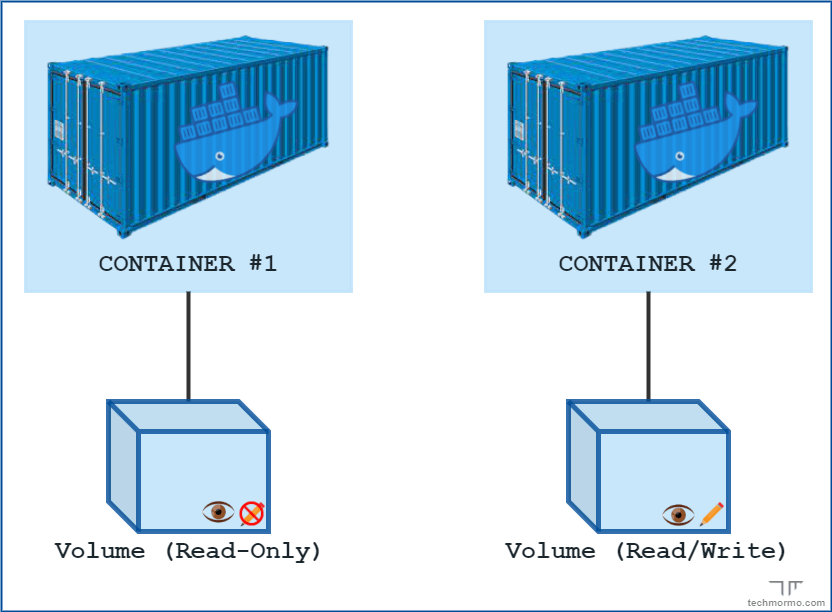 A mount can be specified to be read-only by adding :ro at the end of the -v option in docker run command.

e.g. for a volume named nginx-vol -

Another persistence related issue is, being able to share files/directories among multiple containers.

This can be required for many use cases, for example when running multiple containers of the same service, or for example when producers & consumers in a distributed system need to share files.

Using bind mounts, containers can only share files within a single host/machine.

Whereas with Volumes, containers from many different hosts can share the underlying data e.g. via NFS, S3 or some other storage driver.

This is why Volumes are the preferred choice for sharing data among multiple Containers.

Today we learnt how Docker Containers can be made persistent, either by using bind mounts or volumes. We discussed the primary benefits of volumes, and learnt how we can manage them using the docker cli. We also briefly looked at some useful persistence topics.

docker-compose makes working with volumes easy as a pie. 🥧 But it's very important to understand the basics of volumes first, which was the goal of this blog.

If you're interested in learning about Docker Compose or Swarm, do let me know.

If you want to learn more about handling Docker storage, you can check out the official documentation: https://docs.docker.com/storage

I hope this helps you be a better Engineer or DevOps professional.

It certainly helps me, as I get to learn new things and fill gaps in my own knowledge.

Let me know if you have any confusion or suggestions.

Till then, be bold and keep learning!

Connecting via SSH from one EC2 instance to another

Understanding Docker in a visual way (in 🎥 video): part 1 – Images