Understand the difference between Docker Images & Containers, how they work and how Storage is optimized by Docker for maximum efficiency and performance

What's the difference between Docker Images and Containers?

How does Docker manage to build and run them so quickly?

What's actually happening under the hood?

If you have ever wondered about any of the above, you're in for a treat! 🍝

Here's the agenda for this blog:

Accompanying the explanations, we will also have examples using the docker cli which you can follow along.

This is the second blog on the "Docker Made Easy" series. If you haven't read the first one, I highly recommend you do so before continuing this one.

Just to help us clarify the main concepts, let's start by recalling that...

Docker is a platform that allows us to package our applications into deployable executables - called containers, with all its necessary OS libraries and dependencies.

A Docker Image is a blueprint or template for creating Docker Containers.

Virtualization gives us the ability to create virtual environments from a single physical machine or computer.

You already know this in much more detail if you have gone through the first blog.

But how do Images actually work? It seemed like magic to me when I had started out.

A Docker Image specifies a sequence of steps required to perform a particular task.

That task could be to run a web server or to run a cron job or send an email or whatever you can make a computer do.

An Image can be built manually by running the commands step-by-step against the Docker daemon. But in most cases, it is built using a Dockerfile where the commands to be run are specified in code, and thus, can be automated.

Since examples are an excellent way to understand concepts, let's have our own!

To follow along, open up your terminal and create a new directory to work with. If you're on windows, I suggest opening up git-bash.

Let's create a Dockerfile with the following contents -

NOTE: Alpine is a Linux distribution like Ubuntu or Fedora, but it is SUPER lightweight. Its Docker Image is about 5-6 MB only!

Now, to create an Image from the Dockerfile, we can run -

NOTE: by using a .dockerignore file you can exclude certain files from the context like secret credentials or large dependencies like node_modules etc.

When you run the build command, Docker runs each step on Dockerfile one by one after loading the build context.

Now the cool thing is, if you have already built the Image before, any consecutive builds to that Image will be much faster.

You can verify that by running the build command again. You should notice that it's much faster this time.

But why is that?

This is because - Docker caches the steps which form a stack of layers.

Image as a Stack of Layers

Instead of running all the commands every time you re-build an Image, Docker detects which was the first step that changed. And then, it only performs the steps after that i.e. it rebuilds the consequent layers from the one that changed.

Each step in building an Image forms a layer. The layer itself is an Image.

Therefore, a Docker Image can be thought of as stacking (or layering) one or more Images on top of one another, where -

Each Docker Image is just a diff (or difference) to its previous Image.

By diff, it means what has changed since the previous layer, similar to a Git diff like this one.

We can run docker history my-app to review the history of the Image we've just built. Here's my output -

This shows there were 5 steps in building our Image, with the ones on top coming after the ones below.

The <missing> Image IDs indicate that those layers were built on another system and/or are not available locally. Ignore them. The second step from the bottom with a size of 0B practically does nothing, so that can be ignored as well.

Just wait, we will visualize the layers shortly! 👀

Tip: you can use the dive tool to peek into the layers of an Image yourself.

Each layer or Image has a unique ID, but not all of them have tags. Tags are meant to be human-readable (e.g. my-app, python:3.6, nginx:1.19), so only the final Image that you will use is tagged, skipping the intermediate ones.

You can tag any Image multiple times with whatever name you desire using docker tag.

Parent and Base Images

Now you might wonder - "If each Image is derived from the previous one(s), where does the initial Image come from?"

The answer is, it comes from that Image's Parent. The FROM keyword on a Dockerfile defines the Parent Image to be used (remember that we used alpine).

There can be multiple parents of an Image, but for most use cases a single parent is good enough.

Before we get lost in this parent-ception - let's formalize this question.

Q. Where does the hierarchy of Images start from?

The answer is drum rolls...

It always starts from scratch.

And I mean, you literally write...

Clever naming by the docker creator(s). 💯

Writing FROM scratch means - your resulting Image will not have any parents and is termed to be a Base Image.

You are provided with a totally empty Image which you have to build from the ground up. It is meant for advanced users and use cases, especially where the most minimal Image is required.

So, just knowing this option exists is good enough for us now.

Running Containers from an Image

So, how do Containers interact with this stack of layers / Images?

Remember that, we defined Images to be blueprints for containers.

This runs a container named app1 using the my-app Image we had built previously.

You can follow the logs generated by the container by running -

You should see the echo statements being printed every 2 seconds.

Use ctrl+c or command+c to stop following the logs.

To stop and remove the container run - 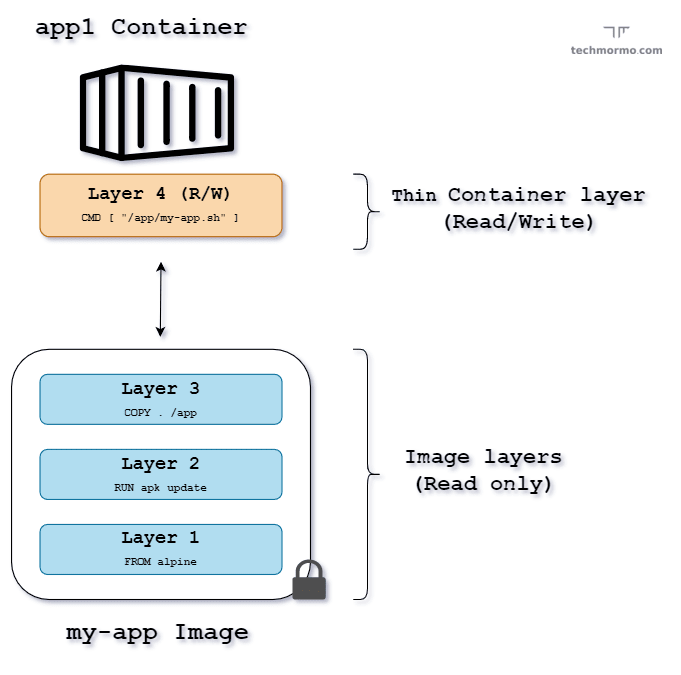 NOTE: All Images are immutable once built i.e. they are read-only.

Therefore, Docker creates a thin read/write (R/W) layer on top of the Image stack for the container.

If the container wants to write/modify any files, this is the layer on which it will be written to. For doing that, Docker uses the copy-on-write (CoW) strategy.

Think of it as copying lazily.

If a write operation needs to be performed by the container, Docker copies the file(s) from the Image layer(s) underneath to the thin R/W layer of the container.

If no write operations are to be performed, the container just reads files from the Image(s) directly.

NOTE: The implementations details of how the layers are managed depend on the storage driver being used, and is well beyond the scope of this blog. You can read more about it here.

In addition to copy-on-write, Containers can also share Images!

If you create multiple containers from an Image, this is how their storage can be represented like - 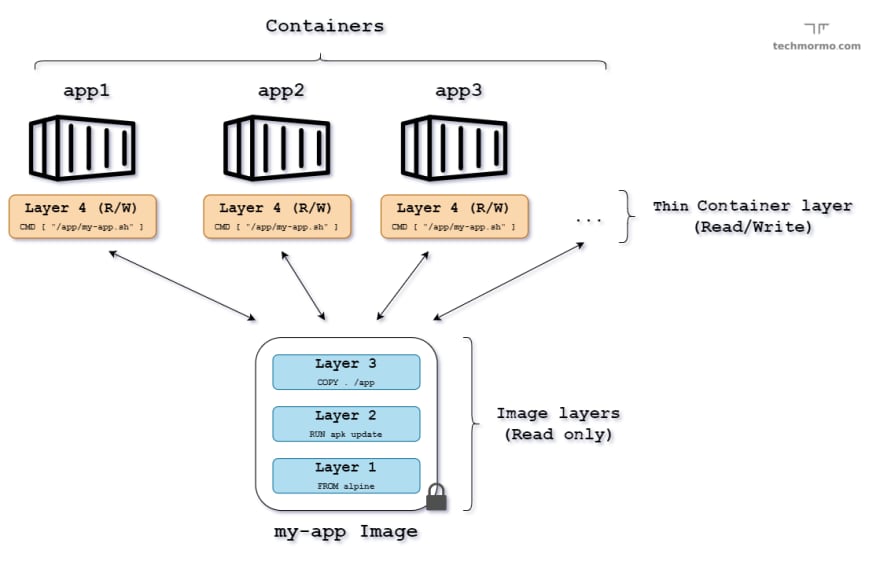 Since all the containers use the same Image, the Image can be shared, while each container will have its own thin R/W layer.

If you, like me, think that it's an engineering masterpiece, then you, my friend deserve a high five! 👏

Just imagine, if Docker copied the entire stack of Images every time a new container was created (like VMs) - it would be really ugly, both in terms of space and time.

Do you wish this was true for you too?

Today we learnt quite a bit about how Docker Images work, and how Storage is utilized to gain stunning efficiency and performance.

What did you find the most interesting? Was I able to shed some light on the topic? I'd love to hear your thoughts.

The Containerization technology absolutely intrigues me, and I can't wait to learn and share more about it with you!

Hope to see you around! 👋

Till then, keep learning!

How to combat climate change with data in AWS

Second Edition of Practical Docker With Python is now available