Let’s start with a quick quiz. You know everything in CSS is a box, right? A box being one of those things with a content area, and padding, borders and margins around it. Of course you do. So in this simple HTML example below, starting from the outer div and including its descendants, how many block and inline boxes are used to render it?

Two? Well, there’s two elements, the inner div and the outer div. An HTML element becomes a box in CSS right? So just the two block boxes then. Sorry, no.

Five? We’ve got some runs of text too. Starting with “The Vogons...”, “The dolphins ...” and “So long...”. These text runs are contained within anonymous inline boxes. If we add one inline box for each of those to the two block boxes of the divs, that makes five. Better, but still no.

Six? The observant might notice that the first run of text is rendered over two lines. An inline box sits within one line, so if we’ve got two lines, the text must be split across two inline boxes. So four inline boxes plus two block boxes equals six. Getting closer, but we’re still not there.

Well, sort of. In addition the anonymous inline box in each line, each line has a “strut” which is used to give the line a minimum height. The CSS specification says that this strut is as if each line starts with a zero-width inline box. So if we ignore the “as if” we should count an additional four boxes, one for each line, to make a total of Twelve.

Including the struts as purple rectangles, the actual arrangement looks like this… 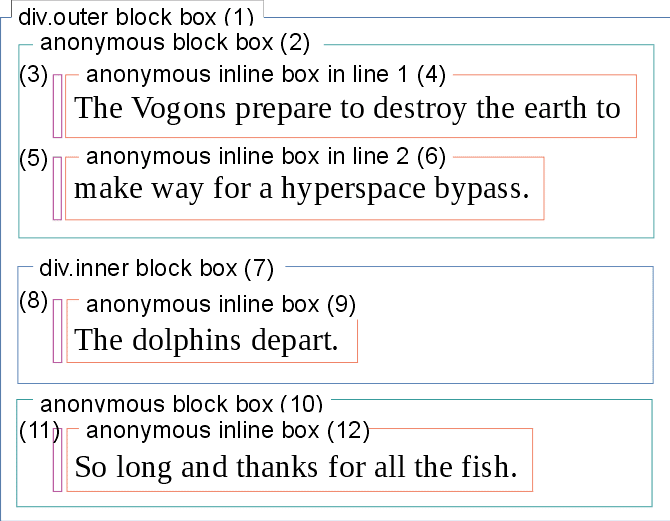 So what’s the point of this? It’s just a reminder that the relationship between HTML elements and CSS boxes is rather more subtle than it may seem at first glance.

The display property has a profound effect on both the type and number of boxes to which an element maps. Here’s some more examples of situations where elements generate either more than a single box.

So can we make use of knowing this? It can help us understand why CSS doesn't always do what we expect it to, and it can help us spot solutions to particular layout problems.

For example, let’s suppose we have

we might have expected that the .cell element would be 200px tall and the text "Hello World" vertically centered in it, since that's how table cell vertical alignment normally works. But it’s at the top. That's because the table-cell’s height isn’t 100% of the .outer element, but 100% of the anonymous table box. And because it’s anonymous, it can’t be styled to be anything other than the default height:auto, and auto means that it's the height of its content. Which is just the height of the text.

As a second example, suppose we have some nicely semantic HTML like this.

The default styling for displaying on a desktop might be just what we want. But on a mobile, we might want to compress it down a bit and for good responsiveness lay the title and list items using a flexbox layout. Now if we just give the div element display:flex, it'll have two flex items, the first created by the h1 element and the second created by the ul element. Evening up the fonts and spacing, we get something like this:

That's not compressed it much. If we wanted the list items to follow on from the heading horizontally we could try making the ul element display:flex as well. However, doing that the items won't wrap under the heading, so we still get this:

Comments, corrections and follow-up questions are most welcome. Even tl;dr.

Understanding The Box Model in CSS