High speed internet is defined as one with a download speed of at least 25Mbps and an upload speed of at least 3Mbps. The Federal Communications Commission (FCC) estimates that 25 million people in the US don't have access to high speed internet, but research done by Microsoft last year found that that number is way off. Instead, they've found that 162.8 million people--or half of Americans--don't have high speed internet. This has always mattered, but, like other forms of web accessibility, it matters even more now.

Using anonymous data across the country, Microsoft found that half of Americans don't have access to broadband internet. How are the FCC's numbers so wrong? The FCC's data comes not from surveying every household--rather, to gather their statistics, they ask internet service providers if they do provide or "could provide" broadband to each census tract. This system also means that if a one person in an entire census tract has broadband internet, then that entire area is said to have high-speed internet (which, especially in rural areas, can be very large).

Check out this map--on the left, is the high speed internet coverage as claimed by the FCC. On the right, is the coverage as found by Microsoft. 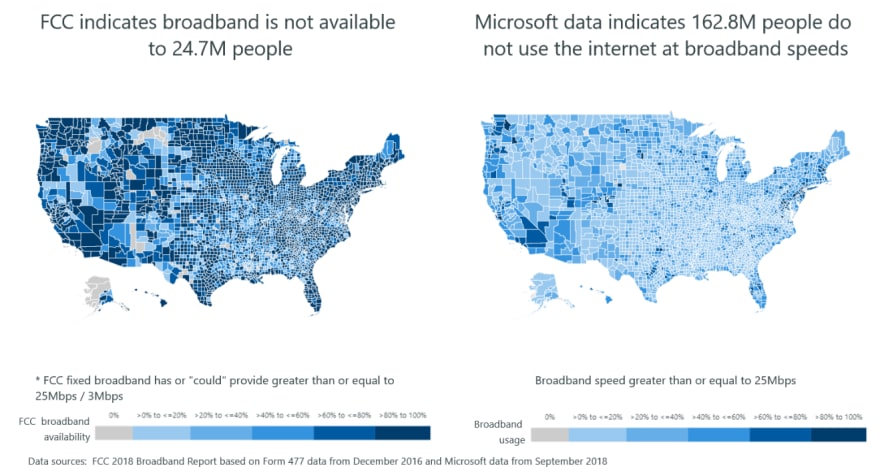 After the publishing of the Microsoft report, in August 2019 the FCC decided to change how data on broadband access would be collected. (You can read the whole ruling here or the press release [here].(https://docs.fcc.gov/public/attachments/FCC-19-79A1.pdf)) The FCC decided to establish a group, called the Digital Opportunity Data Collection, which would collect data through crowd-sourcing from citizens and governments, in addition to the data provided by internet service providers. However, this system still isn't good enough--internet service providers are still instructed to record "each block in which you could (or do) provide services".

While not enough time has passed to evaluate if these new guidelines will give a more accurate picture of high-speed internet access, having an accurate map does not, in and of itself, form the solution. A solution will have to come in the form of significant government investment and a disruption to the telecommunications industry.

Parallel Testing vs. Traditional Testing | All You Need To Know

Everything You Need To Know About TypeScript Union Types

Predicting viewership for Doctor Who episodes

Alisa Bajramovic
🤯 Did you know there are F13-F24 keys? 🤯
#discuss #todayilearned #watercooler
VS Code extensions to increase your Productivity
#webdev #vscode #productivity #beginners
What is dev.to for?
#watercooler #discuss #beginners