In this tutorial, We will study what is hacking, advantage and disadvantage and types of hackers - White, Black, Grey Hat, Hacktivist, Phreaks, and Suicide Hacker.

There is some common use of terminology in the world of hacking. 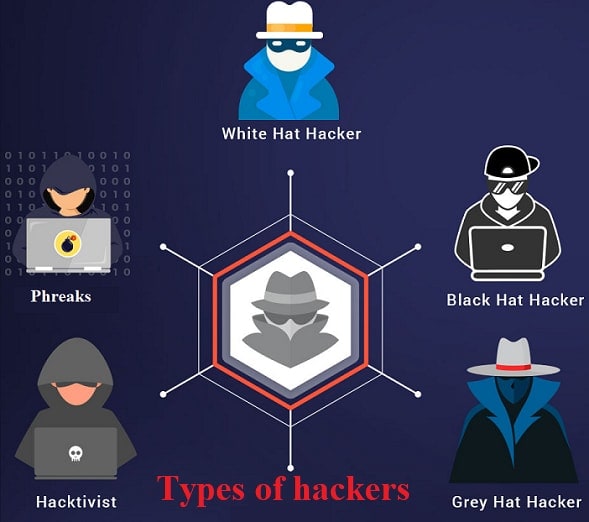 A hacker who gains access to systems with a view to fixing the identifies weaknesses. They may likewise perform penetration testing and vulnerability evaluations.

Ethical Hacker only works for any government and organization, they do not use any system unauthorized, they work on that system only with the permission of the owner of the system, it basically identifies the venerability of any system and fixing it.

Black Hat Hacker only works for the mean, they only see their profit, they do not work for any government and organization, they use any system unauthorized and steal secret information and use it incorrectly.

The hacker that belongs to the ethical hacker and black hat hacker and which allows any computer systems without authority with a view to identify vulnerabilities and reveal them to the system owner. Such a hacker is called a gray hat hacker.

Gray hat hacker works for both government and non-government organizations. When they come in front of some people, they represent themselves as white hat and when they are alone, they do wrong things.

Hackers who use the hacking techniques to send a social, religious and political message, this is usually done to hijack websites and leave messages on hijacked websites to get them to do what they want.

A hacker who identifies and exploits a weakness in telephones instead of computers This type of hacker is called Phreaks.

These hackers appear to be more interested in mobile phones only, they have more fun in identifying the venerability in mobile phone applications, social media apps, games, etc.

(Optional) This hacker can be of any type, it can be a black hat, white hat, gray hat, and phreaks, the only difference is that they do hacking, but when caught while hacking, they do suicide because it can be any Don't want to tell anything to government and organization.