In this tutorial, we will study the Introduction to Flowchart in C Programming, its importance, see an example with an explanation, advantages of the flowchart, and the difference between flowchart and algorithm. So let us start.

What is a flowchart in c?

The main reason behind creating a Flowchart is that by creating a flow chart we get a deep knowledge of the program. And we can know the results and the errors before coding. The flowchart helps in a great understanding of the problem and its solution. And are easy for the other coders to understand the logic and to create their own programs.

What are the symbols of the flowchart?

To understand a program graphically some symbols are used. These symbols have already been provided to us. These are known as the flow chart symbol. Every symbol has a meaning and with the help of the meaning, we can understand the flowchart easily.

Let us assume that we want to do the addition of 2 numbers. To perform addition we will make a flowchart diagram just like the one shown below. 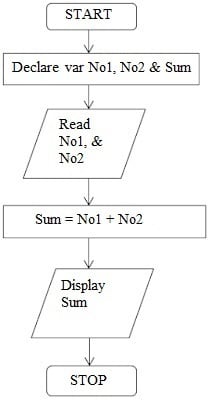 And at the last with the help of the terminal symbol, the flowchart will be stopped. By seeing this flow chart anybody can make a program for performing addition in any language.

What are the advantages of using a flowchart?

What is the difference between an algorithm and flowchart?

A golang library to retry operations with exponential backoff