Have you ever experienced plugging your phone to its charger and then in order to extend its battery lifetime, checking it every some minutes to see weather it’s full or not ? If the answer is “yes” so “Full Battery Notifier” is an excellent app for you .

Did you know that the way you are charging your phone can damage its battery? Phone’s manufacturers always claim nice features regarding to the improvements of the battery life or even new smart charging tactics that will protect your phone against over-charging (to continue charging your phone even after it’s battery reached the full capacity)

There are even some convincing articles on the web, about how harmless it is to leave your phone plugged to it’s charger the whole night by only considering it’s low power consumption’s fee.

However, we know that the phone manufacturer claims’ are just another marketing technique. leaving your phone plugged to the power supply while it have reached the full capacity will eventually destroy its cells and cause an unpleasant experience with your phone, which it’s not so bad for the manufacturers, because in fact they can sell to you the next version of their product, claiming not to have the same issues as the previous one did, and this story will repeat itself over and over again.

One solution is to be organized and monitor the battery’s charging process, in order to unplug it before it reaches 100% which is boring and impractical, and even if you have managed to do so, you may not be able to remember it each time. therefore it became my motivation to make an application in order to automate this task. 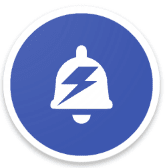 As a software designer my main objective was to design an Android application which is able to monitor the phone battery’s charging process, and eventually notify the user, when it hits the full state.

“Full Battery Notifier” is an energy efficient Android application which it monitors your phone’s battery and whenever your battery’s percentage exceed its threshold (by default the threshold which will be considered as the full state is 100%, but due to the user’s requests it’s possible to modify this threshold in the setting page of the app to your desire value) it will notify you by setting off an alarm.

In order to maximize the user friendliness, the application will consider a set of conditions before attempting on notifying the user which is listed below:

Install the app from Google Play
Open the app and configure your desire settings
On demand, plug your phone to the power supply
When your battery is full, the app will notify you
Unplug the phone from the power supply
and that’s it.

In short “Full Battery Notifier” is a useful application which can live on your phone quietly and it can help you respectfully to have a better battery life.

How Google, Twitter, and Spotify built a culture of documentation

DevOps Is Not Automation

❌AMAZON updates its Terms of Service: PROHIBITS using AWS in case of a Zombie Apocalypse🧟‍♂️